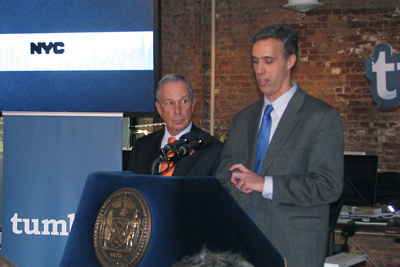 President David Skorton and Provost Kent Fuchs joined New York Mayor Michael Bloomberg today in announcing that Daniel P. Huttenlocher, the university's dean of the Faculty of Computing and Information Science, has been named Cornell vice provost and founding dean of the university's historic CornellNYC Tech campus, home of the Technion-Cornell Innovation Institute (TCII), for an initial five-year term. He will be joined on the leadership team by Cathy Dove, currently associate dean in the College of Engineering, who has been named the new campus's vice president, and by Technion computer science professor Craig Gotsman, who will be TCII director.

"Dan Huttenlocher and Cathy Dove employed their extensive knowledge, as well as their well-recognized leadership skills, during every step of the development of our proposal, and they are continuing to drive our effort to bring the new campus to fruition, expeditiously and expertly, for the people of New York," said Skorton. "And the addition of Professor Craig Gotsman as director of the campus's Technion-Cornell Innovation Institute brings added luster to this impressive team. Cornell and the city are very lucky to have such talented people leading this new -- and new type of -- campus."

"New York City is quickly becoming the center of the digital universe, and today's announcements will help us get there," said Bloomberg. "Under Dean Huttenlocher, Cathy Dove and Craig Gotsman's leadership, the tech campus will help us attract and develop more talent to energize our growing tech sector. And our social media platforms will give New Yorkers the information they need on the channels they want to use."

"We welcome the appointments of Professor Dan Huttenlocher and Cathy Dove, to which we add that of Technion Professor Craig Gotsman as founding director of the Technion-Cornell Innovation Institute. We have complete faith that this team can and will efficiently and professionally promote the ambitious program we have planned for New York City," said Technion President Peretz Lavie.

Huttenlocher and Dove were instrumental in formulating and promoting the winning proposal and working with the city during the selection process for the new state-of-the-art graduate campus, to be operated in partnership with the Technion -- Israel Institute of Technology. Inaugural instruction will begin in off-site locations in the city in September of this year, with groundbreaking scheduled for 2015 and on-campus operations slated to begin in 2017.

The Cornell Board of Trustees Executive Committee approved the appointments of Huttenlocher and Dove Feb. 15, and they will begin in their new posts immediately.

Gotsman, deputy senior vice president of the Technion, who holds the Hewlett-Packard Chair in Computer Engineering, will lead the TCII, a centerpiece of the Roosevelt Island campus, as its founding director. After receiving accreditation from the state of New York, the TCII will confer dual Cornell/Technion Master of Applied Sciences degrees, based on a curriculum with a unique emphasis on the application of sciences, entrepreneurship and management.

"We have an excellent team in place," said Fuchs. "Dan Huttenlocher's well-acknowledged tech sector experience, creativity and leadership in both academia and business make him the perfect choice to lead the new campus's academic enterprise and entrepreneurial initiatives. And Cathy Dove has proven that she is a truly outstanding, dedicated and innovative administrator. I am confident that Craig Gotsman's leadership of the Technion-Cornell Innovation Institute will produce the many benefits for the city, and beyond, that we've envisioned for it."

"This is an unprecedented opportunity to build a new kind of university campus, focused on technology commercialization rooted in the very best academic research, with educational programs that tie fundamentals to practice, and strong ties to the tech sector of the city's economy," said Huttenlocher. "I look forward to working together with Cathy and Craig. We are already actively working towards identifying leased space for the start-up phase before we move to Roosevelt Island, gaining approvals for degree programs, involving local tech leaders in our planning, and preparing to hire world-class faculty."

Academics and business leaders around the country are applauding the appointment of Dan Huttenlocher as dean of the NYC tech campus:

Eric Grimson, chancellor of MIT: "Dan Huttenlocher's leadership has taken Cornell's Computing and Information Science Department to new heights as one of the top programs in the world. Dan has a keen sense of how research and education can drive entrepreneurship and innovation, and I can think of no one better to lead the new tech campus going forward."

Jeff Hawkins '79, founder of Numenta, Palm and Handspring: "Dan Huttenlocher is an inspired choice to lead the new tech campus as he has excelled in both the academic world and the entrepreneurial world. The tech campus's mission is to train the engineers and innovators who will continue to fuel New York City's rise as a global technology leader. Knowing Dan and his talents, I can think of no one better suited to achieve that goal."

John Seely Brown, former chief scientist of Xerox Corp. and past director of its Palo Alto Research Center: "Dan is the rare academic leader who knows not only how to cultivate great engineers and innovators, but also understands both the social and technical sides of tech entrepreneurship from his own years of experience working in the tech sector. Dan is a brilliant choice to lead the new tech campus forward as its founding dean, and I am confident that his students and New York City itself will benefit from his unique approach."

"I am incredibly honored to be able to contribute to this game-changing enterprise that will have such a great impact on Cornell, the Technion and New York City," said Dove. "It is especially meaningful to me as a Cornell alumna, who has always believed that Cornell should have a significant presence in New York City. I'm looking forward to working closely, not only with our faculty, staff and students, but with companies, alumni, our Technion partners and our New York City and Roosevelt Island neighbors. There is a lot of work to do, but I'm excited to be moving forward toward our shared goal."

Huttenlocher and Dove will oversee the formation of the environmentally sustainable campus, whose operational costs are expected to exceed $2 billion over 30 years; the building of the campus's expert faculty, planned to be about 280 strong in 30 years; its highly selective graduate student population, targeted at about 2,500 by 2043; as well as capital construction of the 2 million-square-foot campus. The campus's innovative academic "hub" concept will feature curriculum and research organized across multiple disciplines and directed toward particular sectors of New York City's economy.

As dean, Huttenlocher will have overall responsibility for programmatic aspects of the new campus, including responsibility for the academic quality and direction of the campus's hubs and their evolution over time. He will develop strategic plans for the most effective ways of working with companies and early stage investors in New York City, and he will lead the campus's faculty recruitment and entrepreneurial initiatives. He also will serve as a member of the Technion-Cornell Innovation Institute Joint Governance Board and oversee the Tech Campus Advisory Committee.

Huttenlocher will retain his post as Cornell's CIS dean, until a search for a new dean is completed. He also will co-chair, along with Cornell's Joseph Silbert Dean of Engineering Lance Collins, a group of academic leaders from across Cornell to build the academic programs in New York City, from the basics through accreditation. Collins joined Huttenlocher, Dove and Fuchs on the leadership team on the tech campus proposal.

"I have worked extensively with both Cathy (in her role as associate dean of administration for the College of Engineering) and with Dan (as dean of CIS)," said Collins. "We formed a cohesive team in collaborating on the proposal for the tech campus, and Dan and I, in particular, with the creation of the framework for the academic programs in NYC. And we will continue to collaborate on the academic 'hubs,' which are the centerpiece for the research and educational activities on the campus."

Additionally, Collins will be engaged in developing the relationship between the new campus and the Ithaca-based programs, so that the university maximizes the leverage of this unique opportunity.

Huttenlocher, who holds the John P. and Rilla Neafsey Chair in Computing, Information Science and Business at Cornell, joined the faculty in 1988, leaving at various times to work in industry. At the Xerox Palo Alto Research Center, he founded the Image Understanding Group and served on the senior management team, and at Intelligent Markets, a small financial technologies firm, he served as CTO. In addition to his academic focus in computer science, particularly computer vision, he has worked in other domains, including autonomous vehicles (competing in the DARPA Urban Challenge) and analysis of online social networks.

The recipient of numerous teaching and other awards, Huttenlocher has published award-winning scientific papers, was named a Presidential Young Investigator by the National Science Foundation in 1990 and honored as a fellow of the Association for Computing Machinery in 2007.

As vice president for the new tech campus, Dove will be responsible for all development, outreach and operational aspects of the campus, including areas such as human resources, external and student relations, development and facilities, IT, marketing and communications, finances and outreach. She will serve as the campus's lead on its facility construction team, oversee corporate relations and student services, and lead community outreach and programming, including K-12 programs. She also will lead the Operating Committee and serve as a member of Cornell's senior leadership team.

Prior to her position as associate dean in the College of Engineering, she served as associate dean for MBA programs and administration at the Samuel Curtis Johnson Graduate School of Management and also served as director of financial management services for the senior vice president and chief financial officer. While at Cornell, Dove has served on or led such institutional initiatives as the Budget Model Task Force.

To address Dove's move to a new position, Collins today appointed Julie Delay as interim associate dean for administration, and he will be selecting and chairing a small committee that will be responsible for a national search for Dove's replacement.

Gotsman, as the Technion's associate dean for external relations, founded and led the Technion computer science faculty's Industrial Affiliates Program, which promotes academic-industrial cooperation. In this capacity he developed a course that allows students to perform software projects offered and supervised by industrial experts; and the "Lapidim" study program, which identifies and nurtures the next generation of high-tech leaders. He has founded and run two start-up companies, one based on technology he developed at the Technion, and he has consulted for numerous Fortune 100 companies.

He has published more than 150 papers in the professional literature and has been awarded five U.S. patents.