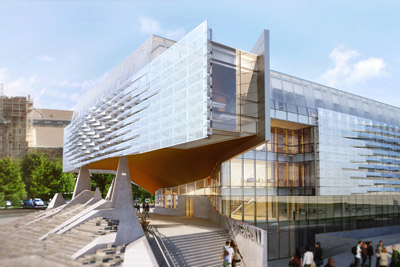 Morphosis Architects
Architect's rendering of Bill & Melinda Gates Hall, to be located on the site of the Hoy Field parking lot.

With the architect's work completed, construction on Bill & Melinda Gates Hall, the new home of the Faculty of Computing and Information Science, is expected to begin this month. At its March 9 meeting the Cornell Board of Trustees approved the expenditure of $51,440,000 for the construction phase. With previous expenditures for planning and development, the cost of the project totals the $60 million allocated in the Capital Plan for fiscal year 2012.

The city of Ithaca approved the final site plan in November 2011. Construction will be accelerated to finish at least part of the building by December 2013 so that the Information Science department, currently outgrowing its rented space on College Avenue, can move in by January 2014. The entire project should be completed by spring 2014. Thom Mayne, founder and design director of the New York- and Los Angeles-based architecture firm Morphosis and winner of the 2005 Pritzker Prize in architecture, is the lead architect.

The new building, to be located on the site of the Hoy Field parking lot, will for the first time bring the Departments of Computer Science and Information Science together under one roof. "Shared space to facilitate interactions between these two departments remains highly important to their continued success," said the proposal presented to the trustees. The building will provide space for new faculty and for the emerging Ph.D. and master's programs, and free up space for the College of Engineering when computer science faculty members move out of Upson Hall. More than one-third of the building will be research and teaching labs, including specialized labs for cybersecurity, human-computer interaction, computational sustainability, robotics and computer vision.

The Bill & Melinda Gates Foundation gave the university $25 million in January 2006 to support the construction of a signature building for computing and information science. The entire project will be funded without any external debt, using other funds already in hand and additional funding to be raised, according to Dan Huttenlocher, dean of CIS.