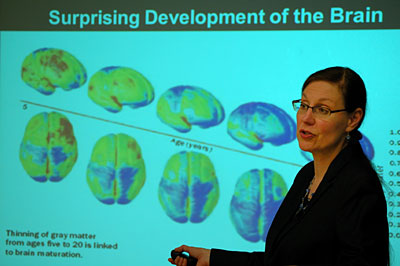 Ted Boscia
Professor Valerie Reyna said that teens take dangerous risks because they believe "it's worth the risk" for the perceived awards, speaking on March 13 to New York City media.

Teenagers take risks that might give most adults pause -- speeding through a red light, binge drinking or having unprotected sex.

Contrary to popular belief, such behaviors are often not impulsive and don't occur because teens think they're invulnerable. Instead, says Cornell human development professor Valerie Reyna, her research shows that adolescents are aware of the potential dangers of their actions, but make calculated choices to "play the odds" because they believe "it's worth the risk" for the perceived rewards.

Sharing the latest evidence on adolescent brain development, Reyna punctured this and other myths for reporters at an Inside Cornell media luncheon March 13 at Cornell's ILR Conference Center in New York City.

Reyna's studies have revealed that adolescents tend to reason and assess risk via "verbatim-based analysis" -- where the mind focuses on precise details and facts and runs a complex comparison of the costs and benefits of a decision. Adults, on the other hand, more often use "gist-based intuition" to immediately understand the bottom-line dangers inherent in an action. Teen drivers may be inclined to race to beat a train, knowing there's a high probability they'll make it; adults would automatically sense that's a bad idea, realizing that it could be deadly.

"The calculation that teens make may be technically correct, but it ignores the categorical possibility of disaster," said Reyna of the College of Human Ecology. "If people are weighing the odds in potentially catastrophic situations, they're already on the wrong track."

To help vulnerable youths make smarter choices about sexual activity, nutrition and fitness, Reyna and Cornell Cooperative Extension partners are applying her research in a new extension-funded risk reduction project. Working with 189 youth ages 14-19 in Broome County, Ithaca, Queens, Harlem, Brooklyn and the Bronx, extension educators are teaching a gist-enhanced version of the Reducing the Risk curriculum identified as effective by the Centers for Disease Control.

Reyna developed two interventions -- one to reduce risk of sexually transmitted diseases and teenage pregnancy and another to promote healthy eating and physical activity -- that teach teens how to apply gist thinking when temptation strikes. Through 14 one-hour lessons, students learn to quickly and automatically recognize hazardous situations and how to reflexively recall and apply their core values to sidestep such dangers.

"Even teens with strongly held values do not always retrieve those values when they need them," Reyna said. "They retrieve them later -- that's called regret. In risky situations, teens need to respond the way troops in battle do to gunfire: Don't reflect, just react and follow your values to get through."

"The students really responded to [the approach] and said how they had learned many of these things in health class but not in this way," said Eduardo Gonzalez Jr., a Cornell University Cooperative Extension-New York City (CUCE-NYC) educator who has taught the curriculum and who also attended the media session two other CUCE-NYC educators.

Reyna also spoke about "The Adolescent Brain: Learning, Reasoning and Decision Making," a new book she edited that collects research from neuroscientists, educators and psychologists on how the teen mind develops.

The stakes, she said, are incredibly high when it comes to risky decision-making by teens. A wrong choice could lead to death or destroyed potential.

"But teens are not fated to negative outcomes from risky behaviors," she said. "We can give them strategies to avoid risk and turn around their life trajectories."