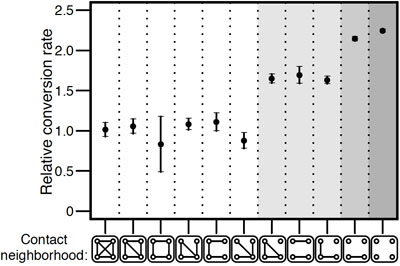 Provided/Kleinberg et al
A comparison of how people who received invitations to join Facebook from four groups of friends responded. Connections between the groups are shown in the squares at the bottom of each column. The less connected those four groups were,the more likely they were to join. These are averages over millions of invitations. 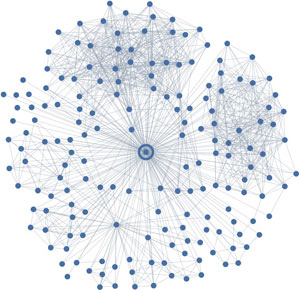 Provided/Kleinberg et al
A Facebook "Neighborhood." This member has two large, closely interconnected clumps of friends, and a few smaller clumps. Each clump probably represents a different social context -- people from work, people from a hobby, and so on. Cornell research shows that many requests from one context are less effective in influencing decisions than requests coming from many directions. Click to enlarge

Variety is not only the spice of life. It's also the key to persuasion, according to research at Cornell.

An analysis of the behavior of millions of Facebook users has found that whether users joined and became "engaged" with the social network did not depend on how many members they knew, but on how many different social contexts the people they knew represented. The results have potential implications for recruitment to political causes, marketing and the promotion of health practices, the researchers said.

The work by graduate student Johan Ugander and Jon Kleinberg, the Tisch University Professor of Computer Science, in collaboration with Facebook researchers Lars Backstrom '04, Ph.D. '09, and Cameron Marlow was reported the week of April 2 in the online edition of the Proceedings of the National Academy of Sciences.

Previously, social scientists believed that the spread of ideas could be modeled like the spread of disease -- hence terms like "viral marketing," said Ugander, first author of the paper. "With viruses, the more people you're exposed to, the stronger the contagion. But social contagion appears to be different. The surprising finding was that people's behavior is based on how many social contexts are represented," he said.

"Each of us is sitting at a crossroads between the social circles we inhabit," Kleinberg explained. "When a message comes at you from several directions, it may be more effective."

For example, if everyone in your office said you needed a haircut, you might ignore the message. But if a few people in your office, church, carpool, gym and book club all said the same thing, you might be more likely to respond. "If several people from one group endorse something, you may see it as redundant. It's really just one endorsement," Ugander suggested.

The researchers worked with an anonymized database of 54 million email invitations from Facebooks users inviting others to join the social network and examined the friendship links among inviters. Intuitively (and in some widely used social science models) you would expect that the likelihood of a person joining would increase with the number of members they knew. But it turned out that decision was linked to the number of different, unconnected social contexts represented.

The researchers then analyzed the Facebook neighborhoods of 10 million new members one week after joining, identifying "clumps" of friends who were connected to one another but not so much to people in other clumps. Three months later, they checked to see if the new member was "engaged," defined as logging in on six of seven consecutive days. Again, diversity won out: People with more distinct clumps among their friends were more likely to be engaged.

Kleinberg's research group is a pioneer in exploring opportunities for social science research presented by online social media. "We are excited by the fact that you can find effects that are important but subtle," he said. "Some of those patterns wouldn't show up at all in smaller samples. The noise level would be too high."

The study suggests that mathematical models of how ideas spread across networks may need to be modified to include neighborhood diversity, the researchers said, and perhaps not just on the Internet.

But Kleinberg cautions that these rules might not apply in all situations. For example, if three friends invited you to a party, you might look forward to hanging out with the group. "But if the three friends don't know each other it sounds less exciting," he explained. More research is planned to explore such counter-examples.

The study was supported in part by the MacArthur Foundation and the National Science Foundation.