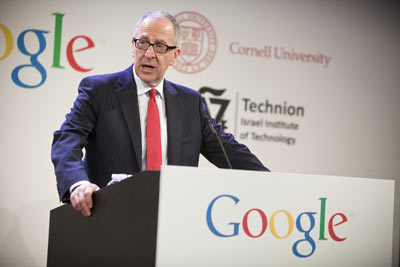 Lindsay France/University Photography
President David Skorton speaks during a press conference at Google headquarters in New York City May 21. Google will be home to CornellNYC Tech while Phase I of the Roosevelt Island campus is being built. 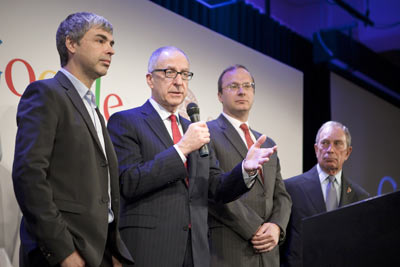 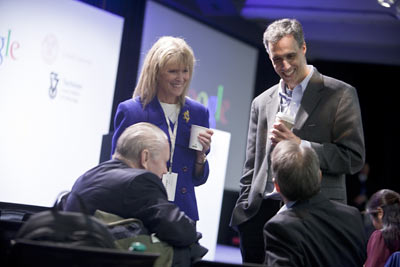 "Google, as everybody knows, is one of the world's most innovative companies," Bloomberg said. "And our applied sciences competition, we think, is one of the most innovative economic development strategies any city has ever undertaken. And the question is, what happens when you marry them? We are about to find out."

Skorton thanked Page and Google for their "unparalleled" commitment to CornellNYC Tech and the tech industry in New York. "We're here today to officially launch our new tech campus and to make it a reality," Skorton said, adding, "The key is engagement between world-class academics, companies and early stage investors, and co-location is critical to jump-starting the right connections between academic research and industry in a mixing bowl and seeing what happens."

Google's prominent building in the heart of Chelsea, the company's second-largest location after Mountain View, Calif., will initially host just a handful of existing graduate students and faculty members this fall. CornellNYC Tech's address will be 111 Eighth Ave. New master's degree students will begin matriculation in 2013, with the first incoming class estimated to be about 25 students.

By the time Cornell moves out of Google in 2017, the campus is expected to have roughly 250 students and 80 faculty and staff members. Cornell will be rent-free tenants at Google for five years and six months, or until the completion of its Phase I campus on Roosevelt Island -- whichever comes first. Over these five years, Cornell will be able to expand up to 58,000 square feet to accommodate its planned growth. The agreement with Google came about from conversations between CornellNYC Tech's founding Dean Dan Huttenlocher and Google executives about the need to accelerate the growth of New York's tech sector.

The occasion brought forth major players on both the city and Cornell sides, New York media, Technion and plenty of Google staff -- "Googlers" -- who expressed enthusiasm and curiosity about their soon-to-be new building mates.

Craig Gotsman, professor of computer science at the Technion -- Israel Institute of Technology and founding director of the Technion-Cornell Innovation Institute, a pivotal initiative of the new campus, thanked Google for its generosity on behalf of Peretz Lavie, Technion president.

"The Technion is thrilled to be a part of New York City's exploding tech scene," Gotsman said. "As an international institute, I can tell you that there is no other place we would rather be."

Page said he was "tremendously pleased" that Google is helping Cornell get its new campus up and running, and he stressed how the campus would provide the growing high-tech sector in New York with the pipeline of talent it so desperately needs.

"It's people that really drive this technological process," Page said. "If we put the best, most innovative minds to work today, we end up with the best possible tomorrow."

Just 18 months ago, at the same Google headquarters, Bloomberg announced the start of the Applied Sciences NYC competition, which invited institutions around the world to vie for the right to build a tech campus in New York City. As the winners of the competition, Cornell received $100 million in land and infrastructure improvements on Roosevelt Island to build an eventual 2 million-square-foot campus. Phase I of the campus's permanent Roosevelt Island home is expected to be completed in 2017, with groundbreaking to begin in 2014.

Since winning in December 2011, CornellNYC Tech has taken many strides toward bringing the campus from vision to reality. In February the campus's leadership of Huttenlocher, Gotsman and Vice President Cathy Dove was named, and earlier this month, Cornell chose Pritzker Prize-winning architect Thom Mayne to design the first academic building on the Roosevelt Island campus.