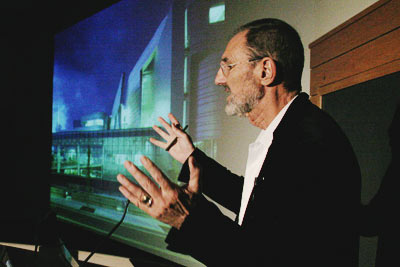 NEW YORK -- To embody the spirit and the mission of the CornellNYC Tech campus, Cornell University has chosen Thom Mayne and Morphosis to design the first academic building for the planned campus on Roosevelt Island, University Architect Gilbert Delgado announced today (May 9).

The building -- which Cornell plans to open in fall 2017 -- will serve as the flagship academic structure for the new CornellNYC Tech campus. New York City Mayor Michael Bloomberg awarded the Roosevelt Island campus project to Cornell Dec. 19, 2011, and with this first building, Cornell is striving to create a net-zero energy structure, featuring geothermal and solar power.

"Our goal is to design an iconic, landmark building that will resonate with the mission and spirit of the new campus," Delgado said. "And we are excited that Thom Mayne and Morphosis will be leading our effort."

Delgado said the 150,000-square-foot academic building, which will be home to the Technion-Cornell Innovation Institute, will have teaching and faculty office space, and also will likely have space to facilitate interactions and to enhance the "opportunities of chance encounters between people to exchange ideas."

Mayne, Morphosis founder and design director and winner of the 2005 Pritzker Prize, will be the lead architect. Morphosis, based in New York and Los Angeles, is expected to deliver the first design drafts in November 2012 with a schematic design in March 2013. The architects will team with Arup, a New York- and Los Angeles-based engineering firm, to help develop this complex building.

"This project represents an extraordinary opportunity to explore the intersection of three territories: environmental performance, rethinking the academic workspace and the unique urban condition of Roosevelt Island," Mayne said. "This nexus offers tremendous opportunities not only for CornellNYC Tech, but also for New York City."

"The CornellNYC Tech project is about accelerating innovation in the technology sector, particularly in New York City, by connecting leading-edge academic research across a broad range of disciplines, by deep working relationships with companies from startups to large corporations, and by engagement with cultural institutions and the school system. It's about weaving together people from different research areas and from different areas where technology can make a difference in the world," said Dan Huttenlocher, Cornell vice provost and dean of the new campus. "This first building will reflect that in design, as the space will encourage interaction, creativity and innovation, balancing the values of quiet reflection with those of unplanned interactions."

Kent Kleinman, dean of Cornell's College of Architecture, Art and Planning, explained the complex nature of this building: "The challenges that accompany the first phase of the campus are dauntingly multi-faceted: Design one of the largest net-zero energy academic buildings in the country; devise a creative architectural statement commensurate with the highest levels of innovation; accommodate programs that are changing with unprecedented rapidity; and, perhaps most critically, offer a compelling vision for a vibrant urbanity to inform future developments. And do it all within a very tight timeframe and modest budget. Simply put: No firm is better at turning constraints into creative solutions of astonishing power than Thom Mayne and Morphosis. It is a great choice for Cornell and for New York."

Cornell has other buildings on its Ithaca, N.Y., campus designed by Pritzker Prize winners. The Herbert F. Johnson Museum of Art was designed by I.M. Pei; Milstein Hall by Rem Koolhaas; Weill Hall by Richard Meier ('56, B.Arch. '57); the Schwartz Center for the Performing Arts by James Stirling; and Gates Hall, currently under construction, by Thom Mayne.

Mayne has created several iconic buildings, including the Cooper Union's 41 Cooper Square in 2009, the Caltrans District 7 headquarters in Los Angeles and the University of Cincinnati's Campus Recreation Center in 2005. Morphosis also designed the San Francisco Federal Building, a 600,000-square-foot structure, of which 70 percent is naturally ventilated, setting a new standard for sustainability.