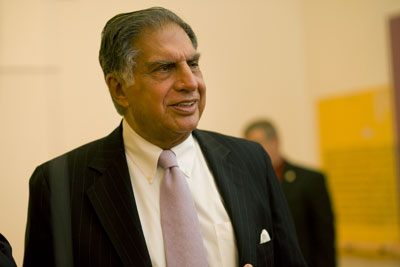 Ratan Tata '59, B.Arch. '62, has received a lifetime achievement award for innovation in philanthropy from the Rockefeller Foundation.

Tata, chairman of Tata Sons and a Cornell trustee, was honored June 26 at the foundation's second annual Innovation Forum and awards ceremony in New York City. This year's forum convened creative leaders from the business, government and journalism to focus on ensuring that the benefits of new technologies don't bypass the world's poor.

Tata received an award for "thoughtfully incorporating the public good into the business model of the Tata Group," according to a Rockefeller Foundation press release. The Tata Group, which operates in more than 80 countries, includes Tata Motors, Tata Steel Tata Consultancy Services and Tata Global Beverages.

Judith Rodin, president of the foundation, described Tata's selection: "We have admired Mr. Tata's work in both the corporate sector and in his personal philanthropy," she said. "We are honored to celebrate Mr. Tata … for his vision, the Tata group's leadership, his commitment to innovation in the area of corporate social responsibility and for his commitment to the poor and underserved."

The Tata Nano, called the world's most affordable car, attracted worldwide attention for its revolutionary design and $2,500 price tag, as well as for its philosophy of bringing inexpensive, safe transportation to the masses. In 2011, the Nano was the subject of a two-day symposium at Cornell and a related Johnson Museum exhibition.

Since the Tata Group's founding in 1868, the company's mission has included returning wealth to the communities in which it operates. Two-thirds of Tata Sons is owned by philanthropic trusts that were founded more than 120 years ago.

At Cornell, the Tata Group has established the Tata Scholarship for Students from India to make Cornell accessible for talented Indian students with limited means, as well as the Tata-Cornell Initiative in Agriculture and Nutrition to create programs in India to increase crop yields, introduce new agricultural technologies and improve livelihoods.