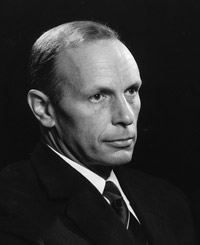 The Cornell NYC Tech campus has reached another milestone: The creation of its first endowed professorship, the Robert V. Tishman Founder's Chair.

The $5 million endowment is in memory of Tishman '37, who died in 2010 at age 94. The professorship will go to a faculty member in the areas of computer science, information science, or in electrical or computer engineering.

Tishman, a major real estate developer in New York City, was founding chairman of Tishman Speyer Properties and chaired the New York Real Estate Board. Although Tishman died before the 2011 announcement of the Cornell NYC Tech campus, "the combination of a major educational facility in New York City that was engaged in the development of information technology would have been truly exciting for him," said Tishman's daughter, Lynne Handler.

Tishman had a long-standing interest in technology and its use in education and research; he supported many Cornell technology initiatives and programs during his life, many anonymously.

The goals of the tech campus -- including technology commercialization across a wide range of industries, housed in an interdisciplinary setting with a focus on outreach -- is a natural match with Tishman's interests, said Daniel Huttenlocher, dean of the tech campus, who also said the holder of the Tishman chair will profoundly shape the new campus's initial faculty.

Tishman's family "felt that the Cornell NYC Tech campus really embodied much of what Mr. Tishman loved about Cornell, and they thought it was a wonderful opportunity to honor him," Huttenlocher said. "The goal of this campus is to transform the tech industry in New York City, building closer ties between graduate-level education and commercialization of information-based technologies."

Tishman, a native New Yorker, was "an early believer in the power of computer technology, particularly as it affected education," Handler said. She noted that he not only funded technology programs at Cornell but, in New York City, supported computer facilities and technology at the Dalton School and Grand Street Settlement House, for example. He was also a longtime supporter and chairman of Montefiore Medical Center in the Bronx and supporter of the East Harlem-based nonprofit organization Boys & Girls Harbor.

A founder's chair in Tishman's name is "a perfect testimonial to his major philanthropic interests," Handler said.

Named chairs are crucial to allow Cornell's emerging tech campus to attract and hire star faculty, Huttenlocher said, since many of them are holding endowed positions at other top universities. Hiring is the top academic priority for the campus, so it can launch its planned degree programs and interdisciplinary research in the coming months and years.

After graduating from Cornell in 1937, Tishman began his career in his family's business, Tishman Realty and Construction Co. In 1978, he and his then son-in-law, Jerry Speyer, formed Tishman Speyer Properties after liquidating the construction company. Tishman Speyer, one of the largest real estate companies in the world, has offices on three continents, a portfolio of more than 77 million square feet, and is valued at more than $30 billion.