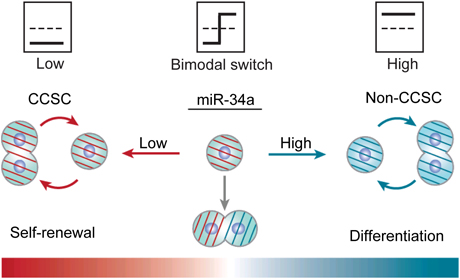 Like picking a career or a movie, cells have to make decisions – and cancer results from cells making wrong decisions.

At the cellular level, wrong decisions can be made right. Cornell engineers with clinicians at Weill Cornell Medical College have discovered that colon cancer stem cells, a particularly malignant population of cancer cells, are able to switch between the decision to proliferate or to remain constant – and this “switch” is controlled by a little-studied molecule called microRNA.

MicroRNA, known as a non-coding RNA, is a relatively understudied molecule because unlike regular messenger RNA, it doesn’t make proteins, and therefore, its importance in biological functions has not been well characterized.

“MicroRNA, which is usually thought to be dispensable in normal tissue, has been largely overlooked in its role in determining cancer outcomes,” Shen said.

Using clinically relevant samples from colon cancer patients at NewYork-Presbyterian/Weill Cornell Medical Center who provided permission, the team conducted experiments to determine a link between the presence of a microRNA called miR-34a and tumor size, metastatic potential and chemoresistance in cancer patients.

They discovered that microRNA acts as a sharp on-off switch that controls the mode of division of colon cancer stem cells, symmetric or asymmetric, in a mechanism distinct from protein regulators.

By studying how microRNA affects cancer in real patient tumors, the researchers hypothesize that late-stage tumors try to shut down the switching mechanism so that cells are free to produce even more cancer stem cells. This is why therapies that might arise from this discovery would need to be “upstream” of the microRNA binding – that is, it’s better to control the switching at the microRNA level rather than just increasing the population of microRNA later, when the cancer has already spread.

Shen, a trained electrical engineer, confesses a longtime fascination with the concept of how cells make decisions – the classical example being stem cells, which must decide whether and when to differentiate into myriad other types of cells and how to spatially allocate them. But what controls this process? Shen likes to think of cells as circuits – how they are wired determines not only their decision-making prowess, but also how robust those decisions are.