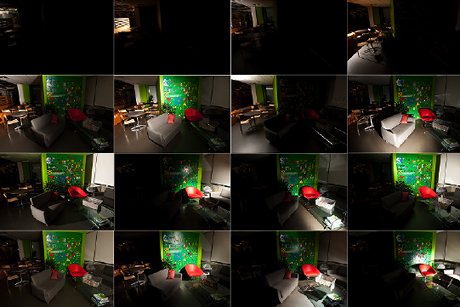 Provided
Many images of a scene, lit from different angles, can be combined in Photoshop for the desired lighting effect, and new software simplifies the process. 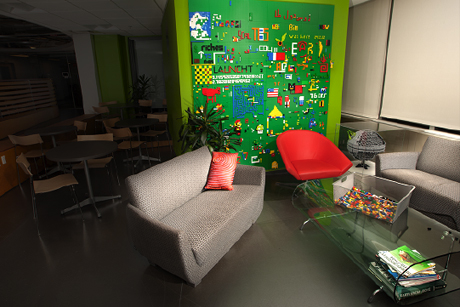 Provided
This image was produced in five minutes by an inexperienced user.

What often separates professional photographers from amateurs is their mastery of lighting. Lighting can control what parts of an image draw your attention, or whether an object looks expensive or cheesy. And even for pros, getting the lights set up for the desired effect can be time-consuming.

The age of digital photography has brought a new approach, called “computational lighting design.” Still not easy, but new software from Cornell will give amateurs a head start and save time for pros.

The idea, used mostly in architectural and advertising photography, is to set the camera on a tripod and walk around with a flash, firing it from many different angles to shoot a hundred or more exposures, each with slightly different lighting. Load the images into Adobe Photoshop as “layers” and superimpose, mix and chop the layers to get the lighting you want.

Even for professionals, getting the right combination is difficult – more art than science, and sometimes requiring hours or days of skilled labor. Working with professional photographers – and later testing with amateurs – Kavita Bala, associate professor of computer science, graduate student Ivaylo Boyadzhiev and Sylvain Paris of Adobe Research have developed software that preassembles many layers into three basic views that the user can combine and modify. They described their work at the 2013 SIGGRAPH computer graphics conference July 21-25 in Anaheim, Calif.

Bala said she was inspired by an advertising photo so beautiful that “you want to own the product.” The secret, she realized, was all in the lighting. 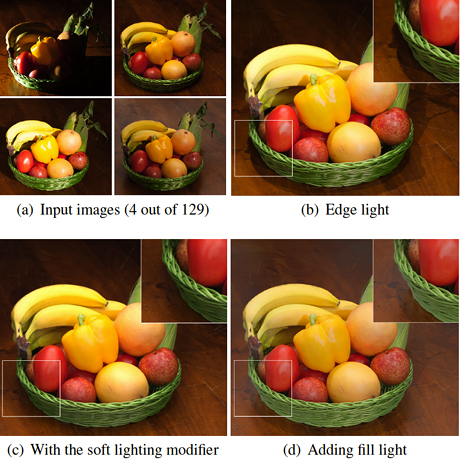 In its current version, the software creates three composite images, which the researchers call “basis lights”: Edge Lighting, which emphasizes the shapes of objects and their shadows; Fill Lighting, which illuminates everything uniformly; and Diffuse Color Light, which brings out the color and texture of every object. The user can select areas of the image in which to apply varying amounts of each. Adding more Fill Light, for example, lightens shadows. The results can then be modified to focus light more sharply on a particular area or to simulate the effect of a diffusing filter over the light source. The advanced user could eventually go back to working with the original multiple layers for final tweaking.

“Our goal was to try to capture the lighting conditions that photographers mostly use,” Bala said, ”but there are other possibilities.” The researchers have been experimenting with backlighting, for example.

Three professional photographers were asked to compare the system to the traditional procedure of working with tens of layers. All were enthusiastic and reported that working with the basis lights gave them a good starting point and greatly reduced the time spent. In another test, seven novice users with little experience in photography were able to produce professional quality results in an average of 15 minutes.

The present version is still not production ready, Bala said, but “we hope to make it available as a prototype,” she said, and it will probably become part of an Adobe product, such as Photoshop or Lightroom.

The research was supported by the National Science Foundation and Adobe.