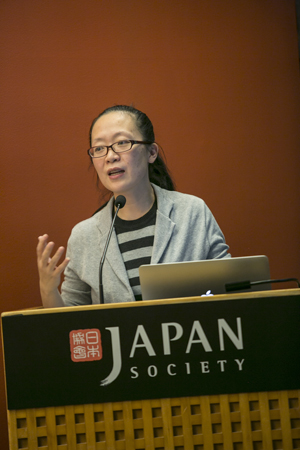 With its innovative approach to sustainable design, the new Cornell NYC Tech campus on Roosevelt Island will be more than another ivory tower, as its forward-leaning design has innovative building technologies.

The Symposium on Resilient and Sustainable Built Environment at the Japan Society in New York City Nov. 15, sponsored by Cornell’s Atkinson Center for a Sustainable Future, the Japan Foundation Center for Global Partnership and the University of Tokyo, focused on technology innovations and the needs of stakeholders to build with resiliency in mind and the capacity to adapt the built environment in the face of climate change and natural disasters in the low-carbon future, said the symposium’s organizer Ying Hua, assistant professor of design and environmental analysis at Cornell’s College of Human Ecology.

A large part of the symposium focused on the sustainable building approach for the Cornell Tech campus. As the flagship building of the future 12-acre campus, the first academic building is being designed to generate as much energy from renewable resources as it will use from nonrenewable resources, said Kyu-Jung Whang, Cornell vice president for facilities services. This will be “a campus built for the next century.”

The campus will embody sustainability in its design, construction and operation, said Craig Gotsman, professor and founding director of the Joan and Irwin Jacobs Technion-Cornell Innovation Institute.

Gotsman said some of the sustainable strategies include: optimal building orientation to maximize photovoltaic performance, efficient geothermal heating and cooling systems, high-performance building envelopes, daylight harvesting to limit the use of electric lighting, efficient lighting systems that use the latest proven technology and controls, and possible passive house criteria for residential towers.

The first academic building, for example, will consume ultra-low energy and use geothermal heat pump heating and cooling, and energy from solar photovoltaic panels, he said.

While the campus will take advantage of its natural habitat by incorporating rain gardens, green roofs and reforestation, it will also take measures to protect against any tidal surges caused by rising sea levels or future storms such as Hurricane Sandy.

“We believe global warming is real,” said Whang. Over the next few decades the current 500-year flood level could replace the 100-year flood level, he said. “In addition to raising the level of the site, we are using the natural topography of the island, where there is a ridge down the center, to place the entry points of all future buildings on campus,” he added.

“The ridge will be captured as our Tech Walk, which will serve as the main circulation spine down the center of campus,” Whang continued. “This high point will withstand most future storms. ... We are also designing the basement of the first academic building as a reverse-bathtub to prevent water from entering and flooding the basement.”

The most sensitive building equipment will be placed at higher points in the building to avoid potentially being damaged by floodwater, he noted.

Other speakers at the symposium addressed smart buildings in Japan; collaborative efforts for the resilience and adaption of built environment in New York City; systems of issues of eco-city development in China; and Tokyo’s efforts for climate change mitigation.

The symposium was the third in a series; in 2011 and 2012, similar groups met in Shanghai and Tokyo, respectively. The Shanghai-Tokyo-NYC symposia series on sustainability and the resilience of the built environment is part of a three-year research project, Tripartite Research Network for Low-Carbon Building Sector in the United States, Japan and China in Post-Kyoto Era, led by Hua. The goal of the project is to get businesses, builders, sustainability experts and designers from the three nations working together on systemic approaches to sustainable building and resilient city.

Sylvia Harvey is a freelance writer in New York City.