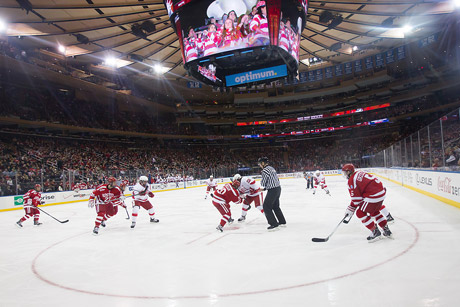 Patrick Shanahan/Cornell Athletic Communications
Cornell plays Boston University Nov. 30 in front of a sold-out crowd at Madison Square Garden, as the Big Red Band is shown on the video scoreboard. 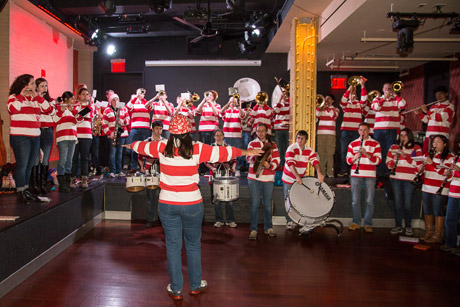 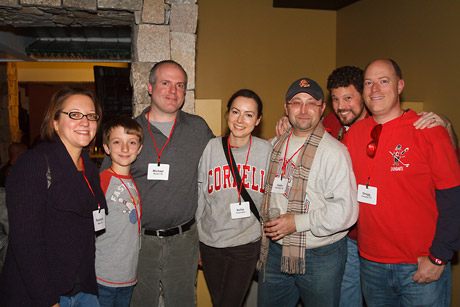 With the Big Red Band in the lead and a sold-out crowd of loyal Cornellians at the ready, the Cornell men’s hockey team took on Boston University (BU) in the fourth edition of Red Hot Hockey, a biennial contest held Nov. 30 at Madison Square Garden.

Competition between the Cornell Big Red and BU Terriers, a rivalry that dates back to a 1925 exhibition game on Beebe Lake, was fierce from the start.

Though the Big Red dominated the game in terms of shots on goal, making 39 attempts on target compared with the Terriers’ 11, Cornell was unable to fend off a series of BU goals from sophomore Mike Moran, freshman Robbie Baillargeon and freshman Nick Roberto, in the first, second and third periods, respectively.

With a goal by Cornell sophomore Christian Hilbrich at 4:05 in the third period, momentum began to shift to the Big Red. Minutes later, with the assistance of John McCarron ’15 and Joel Lowry ’15, Cole Bardreau ’15 gave Cornell its second goal, putting it within striking distance of the Terriers’ lead.

The Big Red fought to tie the game in the final minutes, but was thwarted by BU goaltender Matt O’Connor and BU senior defenseman Garrett Noonan, who blocked a shot with his body.

Though defeated on the ice (final score was 3-2), the evening was far from a loss for the thousands of Cornell alumni and friends who came out to celebrate. Hours before puck drop, alumni of all ages gathered at Bowlmor Lanes in Times Square to reconnect.

“It’s like a mini-reunion here in New York,” said Elisa Leimsider ’97, who met up with friends Lee Hendelman ’96 and A’ndrea Van Schoick ’96 before the game. “I know that every year I get to come here. It’s almost like Ithaca.”

To Ray Mensah ’11, who attends law school in New Orleans, the pregame event offered the opportunity to see classmates Ashley Jeanlus ’11, Angelique Boyer ’11 and Choumika Simonis ’11. “I haven’t seen some of these folks for years; really, almost since graduation. It’s good to reconnect,” Mensah said.

Christian Polman ’05, MBA ’11, said that the turnout at Bowlmor came as a surprise.

“I was expecting 30, 40 people, and it’s a group of hundreds and hundreds of people,” he said.

Matt Nagowski ’05, who hopped a nine-hour train from Buffalo, N.Y., to join Polman and others, said Red Hot Hockey stood out from other games. “I’ll make it to a game or two a year. But this is the main event. This is the real McCoy,” he said. “It’s amazing how it became an automatic tradition. It’s something that we now feel like we’ve always been doing, that we’ll always be doing, even though it’s a recent phenomenon.”

Cornellians stayed in the festive spirit long after the game ended, gathering at Stout, a nearby bar, to share a drink and complimentary sliders at a reception sponsored by Cornell Young Alumni. An hour after the game, the reception was awash in red and white, and even with the temperature near freezing, the line to get in stretched 100 yards out the door.

Claire Lambrecht ’06 is a freelance writer based in New York City.