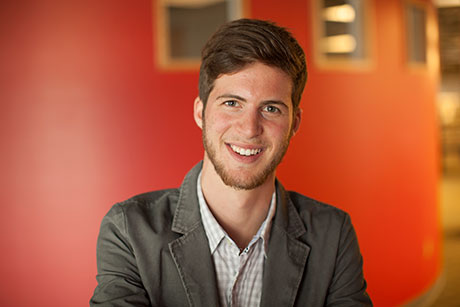 Eric Krasnow ’15 will share his perspective on language and global citizenship with a group of international students this summer at the United Nations, after writing in Spanish about his Cornell Abroad experience in Seville, Spain.

Krasnow is one of 60 student winners of the “Many Languages, One World” International Essay Contest, co-sponsored by the United Nations Academic Impact initiative. The competition invited university students to discuss how multilingual ability fosters global citizenship and understanding. He will present his essay June 27 at the United Nations Global Youth Forum in New York City.

“Language is of the utmost importance in all aspects of a culture – it’s how we write laws, how we share values and how we communicate with each other,” the native of Newton, Mass., said. “I started my essay by defining global citizenship, and said that a good global citizen has a moral commitment to improving the world. In order to understand the problems of a culture, we need to understand the culture and speak the language of that culture.”

He said his opportunity through Cornell's program in Seville to learn alongside Spanish students at the University of Seville last fall was a key to his own understanding of Spain’s culture and values.

One day, one of the instructors was absent, so students gathered at a bar. “Here, there’s so much work we’d probably all just go to the library, while there it’s definitely a more laid-back community,” he said. “I made an effort to sit with them and talk and learn their perspectives on the issues in Spain.”

For example, “you look at high unemployment rates, and you’d think the solution is to have labor mobility like we do in the States – you move elsewhere to find a job,” he said. “But their culture is very family-oriented; you stay where your parents or your kids are … in Spain, family and community come first.”

Cornell students and faculty have participated in the program in Seville since the mid-1980s, Cornell Abroad program adviser Ann Hoover said.

“In exchange, the University of Seville sends a graduate student to study here at Cornell every year, so their students get that benefit as well,” she said.

An economics major and international relations and Spanish minor in the College of Arts and Sciences, Krasnow said he’s had “a very positive experience with professors and other students at Cornell; I’ve learned a lot from fellow students who come from Latin American backgrounds.”

He is interning this summer with Endeavor, a nonprofit network assisting social entrepreneurs in emerging markets, and is applying for a Fulbright scholarship to study the business sector in Mexico and its role in combating violence. He also works with the Committee on U.S.-Latin American Relations at Cornell.

“We do a lot of research on issues in Latin America such as land rights, food sovereignty and migration,” he said.