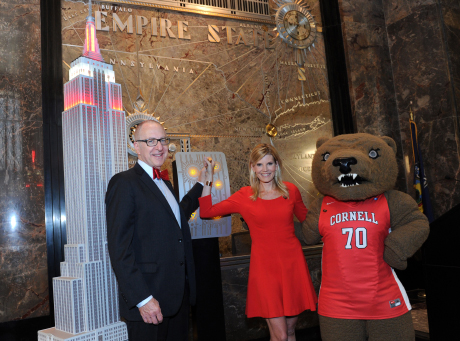 Diane Bondareff/Invision
President David Skorton, NBC News correspondent Kate Snow '91 and the Big Red Bear flip the switch in the Empire State Building lobby illuminating the skyscraper model in Cornell red and white Sept. 12. The building itself was illuminated in those colors that evening. 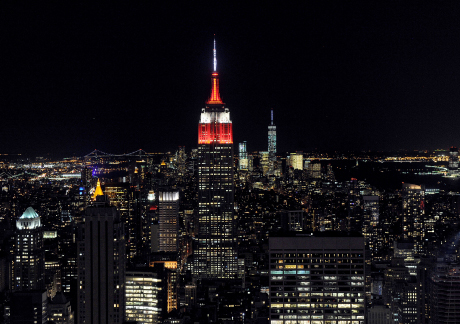 Diane Bondareff/Invision
The Empire State Building's upper floors are illuminated in red and white on the evening of Sept. 12 in honor of Cornell University's sesquicentennial celebration. 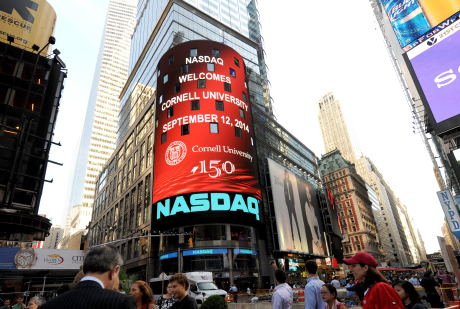 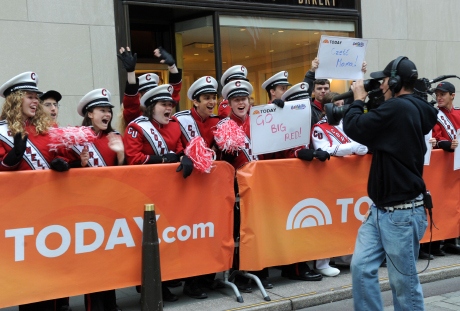 Diane Bondareff/Invision
Members of the Big Red Marching Band join other dedicated Cornellians at the "Today" show plaza early in the morning Sept. 13. 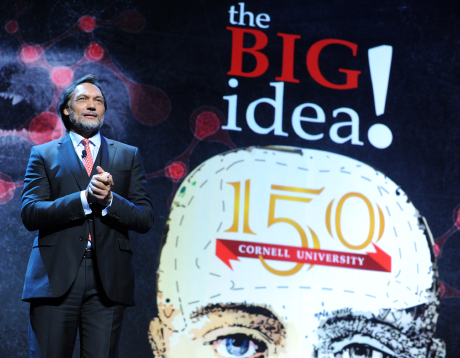 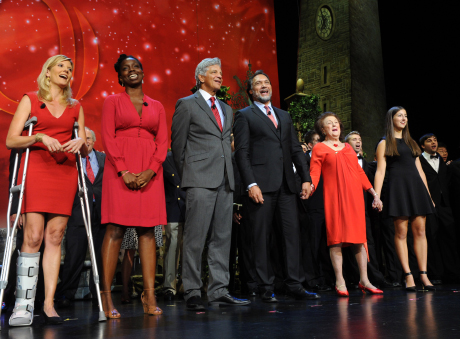 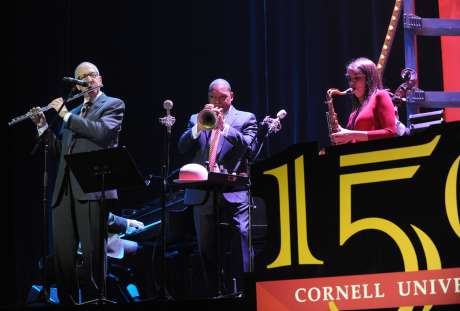 Cornellians kicked off the first of the university’s regional sesquicentennial celebrations in a big way in the Big Apple Sept. 12 and 13.

From red-and-white lights illuminating the Empire State Building to delighted crowds at Jazz at Lincoln Center, generations of the Cornell family heralded the university’s history and impact on the world and gave voice to its future. Photos of and by Cornellians documenting the weekend’s events echoed across social media channels.

“It was inspiring seeing all these people around you, celebrating,” said Susan Joseph ’81, who is a parent of twin Class of 2017 daughters. “It made me think about why I went to Cornell, and remembering what an opportunity that was. It was pretty wonderful to be part of that family. It’s pretty special.”

At an afternoon ceremony Sept. 12 at the Empire State Building, university officials and alumni joined President David Skorton, NBC News correspondent Kate Snow ’91 and the Big Red Bear to flip a switch in the lobby that illuminated a model of the skyscraper in Cornell red and white. At sunset – several hours later and a thousand feet above – the building itself glowed in those colors.

Cornellians next gathered in Times Square outside NASDAQ headquarters; after the closing bell, the seven-story, curved NASDAQ video tower lit up in Cornell red, wishing the university a happy 150th.

Early the next morning, nearly a hundred Cornellians, including the Big Red Marching Band, student dance group Cornell Bhangra, the Cornell University Glee Club and the Big Red Bear formed the majority of the crowd outside the “Today” show studio at Rockefeller Plaza. Cornellians were dubbed “fans of the day” and invited inside the studio, and the sesquicentennial got a shout-out by the hosts.

The weekend’s signature event was two performances of the “The Big Idea! (Cornell Celebrates 150)” at Jazz at Lincoln Center. The audience for the two productions totaled about 1,500, including a sell-out crowd in the evening.

The performances mixed humor, music, video, skits and appearances by dozens of Cornellians on the Ithaca and New York campuses with a narrative of “exploring the Cornell brain” to chart several “big ideas” that began with the founding of Cornell: the blending of the sciences and humanities, the challenge of making Cornell accessible to students of all backgrounds, and the determination to use knowledge and discovery to improve the world.

The oldest alumni in attendance, Lucy Jarvis ’38, Bill Berley ’45 and Bernie Mayrsohn ’45, joined the casts on stage, as did one of the university’s newest students, fifth-generation Cornellian Lizzie Klein ’18, connecting the Cornell family across generations.

In an on-stage chat with Snow, Skorton said the “big idea” of Cornell’s founding attributes would continue to guide Cornell’s future, predicting: “We’re going to bring the world to Cornell and Cornell to the world.”

“I think Ezra Cornell would be thrilled with what Cornell University is today,” said trustee Cornell, the founder’s great-great-great grandson. “And it’s going to be a very exciting future.”

“The people who put this together really hit the ball out of the park,” said Robert Harrison ’76, chairman of the Cornell Board of Trustees. “Two hours that were just riveting. It was truly a brilliant job.”

“It was absolutely amazing to be part of this performance,” said Ashley George ’16 of Cornell Bhangra. “We love to be here and celebrate our love for Cornell, because that’s what brought us here together as a family.”

“It really captured the spirit of Cornell. … I really had a blast,” said Sheryl Tucker ’78, alumni-elected trustee and chair of Cornell Mosaic.

“I loved it – it was very well done, and I think the crowd loved it; it was all things,” said emeritus trustee Robert Appel ’53. “It’s a great history, and a great future.”

Sesquicentennial co-chairs Peter and Nancy Meinig agreed with the sentiments.

“The cast did a wonderful, wonderful job. People in this room are vibrating tonight,” said Peter Meinig ’61, chairman emeritus of the board.

“I just loved the spirit, I loved everybody in red, it’s a wonderful kickoff,” said Nancy Meinig ’62. “All the way from Lizzie Klein to Lucy Jarvis … everybody is connected regardless of class year.”

Are you in? More celebrations ahead