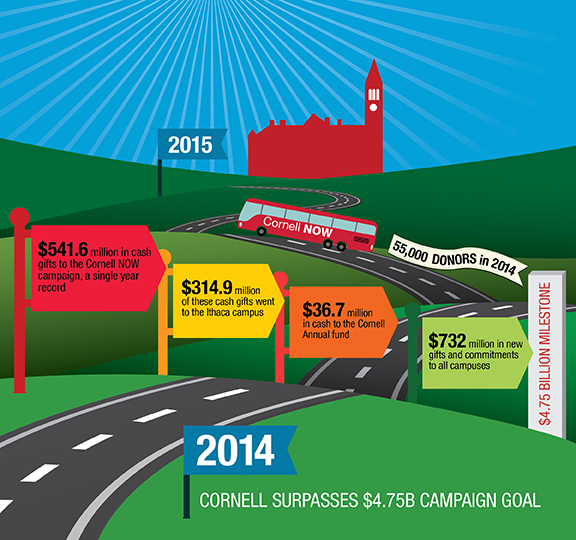 Cornell University has surpassed its $4.75 billion “Cornell Now” campaign goal, thanks to a record year of giving in 2014.

“As we celebrate this remarkable milestone heading into the university’s sesquicentennial year, I am most grateful to everyone who helps Cornell to succeed and thrive,” said President David J. Skorton. “I pledge to use these funds – and to seek more support – for our students, faculty, programs and facilities. Philanthropy gives us a much-needed edge as we strive for greater excellence, and it helps us withstand economic challenges to make Cornell accessible to the world’s best students.”

At the close of the fiscal year June 30, $4.79 billion had been raised in the “Cornell Now” campaign, and the total continues to rise.

Weill Cornell Medical College announced last year that it had reached its goal of raising $1.3 billion for its pioneering “Discoveries That Make A Difference” campaign, which is part of the university’s overall campaign. Weill Cornell continues to raise money for research, education and patient care, through its “Driving Discoveries, Changing Lives” campaign, launched in 2013.

“We are incredibly grateful to our loyal donors whose generosity and dedication to Weill Cornell will directly benefit our institution, doctors, researchers, students and patients for generations to come,” said Dr. Laurie H. Glimcher, the Stephen and Suzanne Weiss Dean of Weill Cornell Medical College.

Also in New York City, Cornell Tech continues to attract support for its growing programs, expanding its presence on the Chelsea campus and beginning building on Roosevelt Island.

Skorton predicts that alumni, parents and friends will carry this momentum through the end of the “Cornell Now” campaign in December 2015 and beyond.

“This is an important accomplishment in the university’s history,” said Charlie Phlegar, vice president for alumni affairs and development. “And our work is not done.”

In 2014, $54 million was raised specifically for students and student programs; of this, more than $30 million went to undergraduate and graduate student financial aid, the top university priority.

Another $427 million was raised in 2014 for faculty and program support. Those funds build Cornell’s international programs and library collections, endow professorships, increase faculty diversity and recruit new faculty members from among the world’s top scholars.

The Cornell Annual Fund raised $36.7 million in cash,surpassing its annual goal for the 12th consecutive year. More than 55,000 individuals gave to Cornell in 2014, more than in any previous year.

Of the alumni, parents, friends, faculty and staff who supported the annual fund last year, 7,332 were first-time donors. In addition, the 1865 Society, honoring those who give in consecutive years, now has more than 40,000 members.

“This is most definitely a team effort,” said Lyons.

Phlegar is encouraged by the groundswell of support leading into the university’s sesquicentennial year, he said.

“The coming year will offer opportunities for Cornellians to renew their connections with one another and to celebrate the tremendous impact Cornell makes in the world,” he said. “We expect to see a surge in event participation, volunteering and giving from Cornellians around the world – a tremendous outpouring of Big Red pride.”