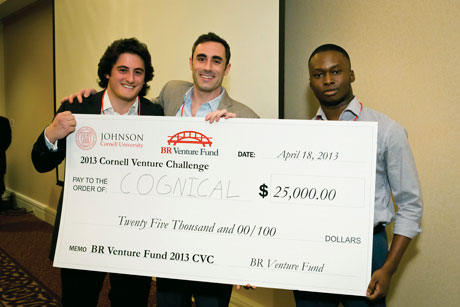 It’s a financial Catch-22 that economists call a “poor trap”: If you don’t have money, everything costs more. The 21st Century version is that if you don’t have a credit card, you can’t buy online, where the bargains are.

Now a startup business incubated at Cornell will offer “underbanked” consumers a fast and convenient way to acquire life’s expensive necessities at a much lower cost than a predatory payday loan. Although conventional lenders might see these customers as risky, the new company will use sophisticated computer analysis to look beyond numbers to decide who can be trusted to make their payments.

There are 64 million shoppers in the U.S. who need access to credit but have no credit history, the entrepreneurs pointed out, and 34 percent of Americans between 18 and 49 do not have credit cards. If the venture is successful it will not only help those consumers but also boost the economy by helping retailers increase sales.

“Credit card companies don’t lend less,” explained Ashutosh Saxena, assistant professor of computer science. “We can start small depending on the items the customer wants, and the computer will tell us the amount of risk we can accept.”

Wright and Eleanya won the $25,000 first prize in the 2013 Cornell Venture Challenge competition sponsored by the BR Venture Fund, Cornell’s seed-stage venture capital fund run by the students of the Samuel C. Johnson Graduate School of Management, with their proposal to create a company that would apply computer analysis of complex data to make financial decisions.

“We wanted to reduce cost and grow access, using science to help lenders make better decisions,” Wright said. “But lenders weren't interested in passing these benefits along to the consumer, so we had to go direct to the consumer.”

Saxena and Eleanya are experts in “machine learning,” in which a computer learns to recognize patterns in large collections of data. They trained a computer by feeding it a database of past loans along with an array of information about the borrowers, including financial history, where they live, their driving records, the device from which they applied, even whether or not their home has a fireplace – all the trivia the Internet knows about people these days. The “deep learning” algorithm they developed finds common patterns in the lives of borrowers who pay back their loans – and other patterns for those who don’t.

So far, Wright said, seven retailers are offering the Zibby payment option online or in-store, including appliance and furniture dealer Goedekers and electronics sellers Focus Camera and Ritz Camera. Others are being added now at the rate of about two a week, he reported – and that includes brick and mortar stores, attracted by the ability to get online approval of a sale in a few seconds, rather than waiting anywhere from 30 minutes to days to process a “nonprime” application. Since the decision is made by a computer, an applicant will get an immediate response, either online or in a store.

The system is designed for expensive products such as furniture, appliances, electronics and musical instruments. The format of the transaction will be “lease-to-own” in which Zibby retains title to the merchandise and rents it to the consumer, who can buy or return the product at any time. When consumers prove themselves responsible by making their payments, Wright said, the company will “graduate” them to a form of conventional credit.

“We're giving them a means to acquire expensive products they couldn't otherwise afford,” said Wright. ”Refrigerators to keep food cold and beds for kids to sleep in.”