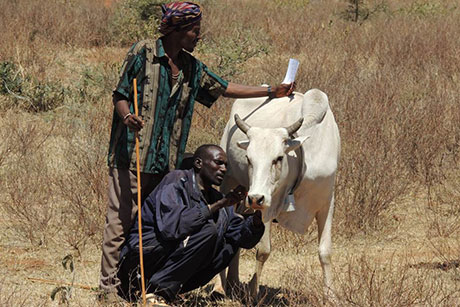 Patrick Clark, USDA-ARS
Pastoralists learn to fit a GPS collar on one of their cows. Cornell researchers track the movement of herds to evaluate the effect of their interventions, and supply the information to governments and aid organizations to help in locating new watering points. 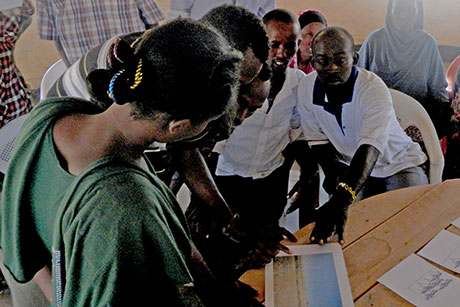 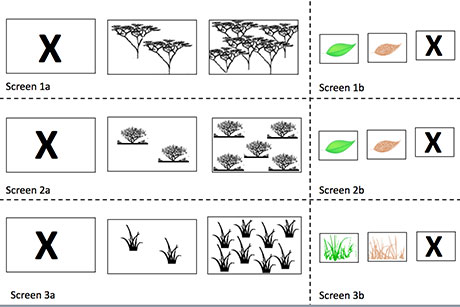 Simple icons displayed by a cell phone app allow African pastoralists to report the condition of vegetation they observe. Tapping an icon can report "No grass," "Some grass" or "A lot of grass."

Space-age technology is coming to the aid of rural herders in Kenya, helping them deal with drought, climate change, civil unrest and land-use pressures that threaten food security in the region.

In a pilot project launched by Cornell researchers, satellite images and cell-phone apps will combine to help them find forage for their animals.

A team from the Dyson School of Applied Economics and Management and the Cornell Institute for Computational Sustainability have developed simple cell phone apps that the herders, called pastoralists, can use to report conditions at their grazing sites.

Gomes is principal investigator for the project, which is funded by the Atkinson Center for a Sustainable Future.

Pastoralists make their living – and help feed the population – by raising herds of cattle, sheep, goats and camels. They live a nomadic existence, moving from one patch of vegetation to another.

“Where the soils and rainfall are inadequate to grow crops, the only viable livelihood is raising livestock,” explained Christopher Barrett, professor and chair of the Dyson School. “Sixty percent of the economy is livestock products.”

But that economy is “precarious,” he added, constantly threatened by drought and a lack of government support, recently aggravated by constant violence. One of the many things needed is information, he said. Herders need to know “Where should I take my cattle to graze?” “What price can I get for my cattle?” “Are there bandits in the area?” Now that information can be fed back to the pastoralists through their phones.

Satellite images can distinguish vegetation from arid wastes, but can’t tell what kinds of vegetation they are seeing. Goats and camels can browse on shrubbery and tree branches, but sheep and cattle need grass, which grows only where there is more water.

Cell-phone reports tagged with GPS coordinates are fed to a computer that will learn to associate the reports with the spectral “fingerprints” in visible and infrared light of corresponding locations on the satellite images. Eventually, Gomes said, the computer will be able to identify different kinds of vegetation from the satellite image and that information will be fed back to the pastoralists through their phones. Gomes also envisions using drones to collect information closer to the ground.

Nathaniel Jensen, a post-doctoral researcher in the Dyson School, is testing the system with a small group of pastoralists in the town of Isolio in Kenya. Although cell phones are ubiquitous in rural Africa, he has given the herders new phones to ensure that everyone is working on the same platform. Upgrading from a basic phone to a smartphone is part of the appeal of the project for the pastoralists. The observers are paid for their work in cell phone minutes, a common currency in their society.

“The app is designed so they don’t have to speak the language: it’s all pictures,” said team member Peter Frazier, assistant professor of operations research and information engineering.

By tapping icons, he explained, a user can report what kind of vegetation has been seen, how much is there and how healthy it is. Icons might represent “No grass,” “Some grass,” or “A lot of grass.” For a double check, the observer uploads photos. Down the road it might be possible to train a computer to recognize the vegetation seen in the photos, Gomes said.

While it’s updating the map, the computer also notes areas from which little information is being reported, and adjusts the incentives paid to the pastoralists to encourage them to visit those areas.

“Data from near their home is not that interesting,” said graduate student Yexiang Xue, who worked on the incentive system. It turns out to be a very hard problem in optimization, he said. “If you set up one place with a very high payment, you lose the benefits of people going to other places.” And it all has to fit in the budget, he added.

Some of the animals also are fitted with GPS collars to track the movements of the herds. The researchers are watching to see if the new technology changes the routes the pastoralists take, and how they respond to incentives. Meanwhile, the data will be given to the government to guide the construction of new artificial oases or “water points.”

If the pilot project is successful, Jensen said, it will be expanded to many more pastoralists starting in March.