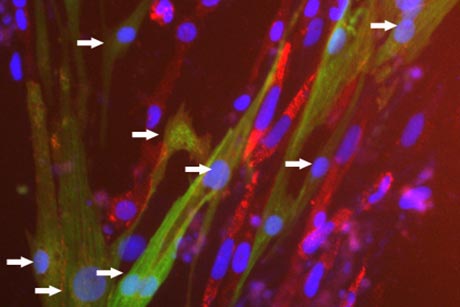 For the first time, scientists can efficiently generate large numbers of rare cells in the network that pushes the heart's chambers to consistently contract. The technique, published May 28 in Stem Cell Reports, could be a first step toward using a person's own cells to repair an irregular heartbeat known as cardiac arrhythmia.

“This study, while done using mouse cells, will now allow us to develop human heart cells and test their function in repairing damaged hearts,” said the study's senior author, Dr. Todd Evans, vice chair for research and the Peter I. Pressman Professor in the Department of Surgery at Weill Cornell Medical College.

The human heart beats billions of times during a lifetime, so it's not surprising that development of irregular heartbeats can lead to a variety of cardiac diseases, Evans says. But treatments for these disorders are costly, and often ineffective.

“The government pays more than $3 billion each year for cardiac arrhythmia-related diseases. Despite this enormous expense, the treatments we have available are inadequate,” Evans said. “For example, artificial pacemakers are often used, but these can fail, and are particularly challenging therapies for children.”

One solution is to coax a patient's own cells to generate the specific kinds of cells in the cardiac conduction system (CCS) that maintain a regular heartbeat.

“We can imagine someday using these cells, for example, to create patches that can replace defective conduction fibers. Of course this is still a long way off, as we would need to study how to coax them into integrating properly with the rest of the CCS,” Evans said. “But previously, we did not even have the capacity to generate the cells, and now we can do so in a manner that is scalable, so that such preclinical research is now feasible.”

Evans worked with Dr. Shuibing Chen, an expert in stem cell and chemical biology, and Dr. Su-Yi Tsai, a postdoctoral fellow and the study's lead investigator. Other key contributors were from the laboratory of Dr. Glenn Fishman, who specializes in cardiac physiology at New York University.

Their first goal was to increase the efficiency of coaxing mouse embryonic stem cells to become CCS cells. They created mouse stem cells that can express a CCS marker gene that can be quantified. This allows them to measure how many embryonic cells morph into CCS cells.

By screening about 5,000 small molecules, the investigators found one that  increased expression of this marker gene. That molecule pushed over 30 percent of differentiating cells to become rare cells, known as Purkinje cells, which are the terminal part of the conduction system and integrate with working muscle cells. Before, fewer than 1 percent of cells differentiated into these Purkinje cells.

The small molecule worked by activating the cAMP signaling pathway, which then helps push embryonic cells to differentiate, “and which is very druggable - meaning we can find a way to turn it on when we need to produce CCS cells,” Evans said.

“This finding suggests we now have the beginnings of the technology needed to produce specialized cells that may be able to repair the precise areas where contraction is faulty in human hearts,” Evans said.