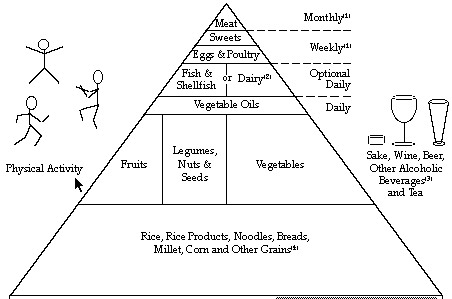 To offer a healthful alternative to the 1992 U.S. Food Guide Pyramid, which lumps some animal and plant foods together in a single group, Cornell and Harvard University researchers have teamed up with other experts to assist the nonprofit foundation, Oldways Preservation & Exchange Trust, unveil an official Asian Diet Pyramid.

It reflects the traditional, plant-based rural diets of Asia, which research increasingly shows to be linked to much lower rates of certain cancers, heart disease, obesity and, in some cases, osteoporosis and other chronic, degenerative diseases than those found in the United States.

The Asian Diet Pyramid emphasizes a wide base of rice, rice products, noodles, breads and grains, preferably whole grain and minimally processed foods, topped by another large band of fruits, vegetables, legumes, nuts and seeds. Daily physical exercise, a small amount of vegetable oil and a moderate consumption of plant-based beverages, including tea (especially black and green), sake, beer and wine also are recommended daily. Small daily servings of dairy products (low fat) or fish are op tional; sweets, eggs and poultry are recommended no more than weekly, and red meat no more than monthly.

It was developed by specialists from the Cornell-China-Oxford Project on Nutrition, Health and Environment based at Cornell University; the Harvard School of Public Health; and the Oldways Preservation & Exchange Trust, which issued the Mediterranean Diet Pyramid three years ago.

"The nutrient composition of the traditional rural Asian diet is very similar to the Mediterranean diet in that both are largely plant-based and both pyramids recommend that meat be consumed no more than once a month or more often in very small amounts," said T. Colin Campbell, Cornell professor of nutritional biochemistry and director of the Cornell-China-Oxford Project, a mas sive survey of more than 10,000 families in mainland China and Taiwan designed to study diet, lifestyle and disease across the far reaches of China. By investigating si multaneously more diseases and more dietary characteristics than any other study to date, the project has generated the most comprehensive database in the world on the multiple causes of disease. Much of the research behind the pyramid is based on the China project's research findings.

"However, the Asian diet, which is significantly lower in total fat, may prove to be an even more healthful diet," Campbell added.

Campbell said he hopes that the Asian Diet Pyramid will bring further attention to the evidence that there are many traditional cuisines worldwide which are useful in promoting good health.