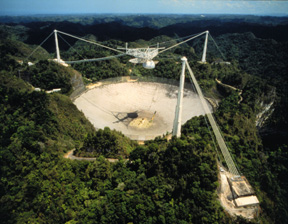 Photo by David Parker, 1997/Science Photo Library
The 1,000-foot reflector dish of the Arecibo radio/radar telescope rests in a mountaintop sinkhole in Arecibo, Puerto Rico, set 450 feet beneath the structure supporting the dome, which houses a system of reflectors used to focus radio waves picked up by the telescope's dish. It is the world's largest single-dish radio telescope and most powerful radar.

The telescope, the world's largest single antenna radio telescope (305 meters, or 1,000 feet) and the world's most powerful radar, is poised for scientists to get detailed information about exotic objects in the distant universe, detailed surveys of comets and objects within the solar system and new information about Earth's upper atmosphere.

The upgrade, begun in 1992, features a new system for focusing radio signals using a system of Gregorian reflectors; a new, more powerful 1 million-watt radar transmitter; and a 50-foot-high steel mesh ground screen to reduce ground interference. The facility, operated by Cornell University's National Astronomy and Ionosphere Center (NAIC) under cooperative agreement with the NSF, was upgraded with funds from the NSF and NASA.

"We at NSF are delighted at the prospect of U.S. scientists being able to capitalize on the existence of this extraordinary new facility to make dramatic improvements in our understanding of many parts of the universe in which we live," said Hugh Van Horn, director of the Division of Astronomical Sciences of the NSF.

"The upgrade essentially gives us an entirely new facility and a new ability to do great science," said Cornell President Hunter Rawlings. "The project was an enormously complex undertaking that required very careful engineering, and we look forward with great anticipation to the prospect of turning this powerful eye ­ or ear ­ on the universe." 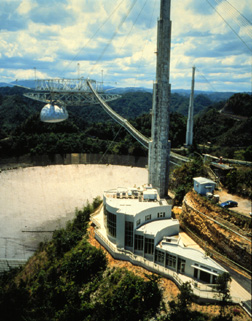 Photo by David Parker, 1997/Science Photo Library
The Fundacion Angel Ramos Visitor and Educational Facility is nestled on a hilltop overlooking the 1,000-foot reflector dish at Arecibo Observatory, Puerto Rico. The center has exhibits, an auditorium, meeting rooms, office space and an observation platform with a breathtaking view of the radio telescope. Suspended 450 feet above the reflector dish, at left, is the structure supporting the dome, which houses a system of reflectors used to focus radio waves picked up by the telescope's 1,000-foot dish.

Arecibo Observatory is a radio/radar telescope that uses electromagnetic radiation, or radio waves, to study phenomena that occur as close as 3 kilometers (about 2 miles) above Earth in the upper atmosphere -- or exotic cosmic objects many billions of light years away, at the edge of the known universe.

The upgrade -- the second since the facility was built in 1963 -- will allow scientists to do in one hour what previously took 10 hours. The sensitivity will improve by a factor of about 20 for studies of the solar system and by a factor of about three or four for studies of distant galaxies. Also, more radio frequencies are available with increased sensitivity at all frequencies. Astronomers will be able to "observe" signals farther away, and thus, further back in time, than ever before. The telescope's frequency range, and thus its sensitivity, previously 50 MHz to 3,000 MHz, now increases to 10,000 MHz.

"Scientists are eager to use this new instrument for a variety of studies," said Paul Goldsmith. "We will look at how galaxies form and how stars are born, at fainter pulsars, other worlds' moons, and the dynamics of the upper atmosphere with more bandwidth, more clarity, better resolution and greater sensitivity than ever before."

The upgrade had been under planning, design and construction since the early 1980s. Over that time, many people, both within NAIC and Cornell and from other institutions in the United States and overseas, have been involved.

"It has been a tremendous group effort over a long time to bring the original idea of the Gregorian reflector system to the reality that you see today," said Donald Campbell.

Unchanged in the upgrade is Arecibo's trademark reflector dish. The 305-meter (1,000-foot) dish is unlike any other. Most radio telescopes use a parabolic antenna that can be steered to any direction. The Arecibo antenna is spherical and remains fixed -- but the focusing device suspended above the dish can be steered. Thus, signals can be captured from a greater slice of the sky.

A radio/radar telescope captures and transmits radiation at radio wavelengths, unlike optical telescopes, which capture lightwaves. So clouds, haze, even daylight do not interfere with radio astronomy. The big dish -- the primary reflector -- is the world's largest single dish radio antenna. It captures these electromagnetic waves and reflects them to a secondary reflector enclosed in the dome suspended above it, which in turn concentrates them to a focal point. After being amplified, the signals are sent via fiber optic cables to the operations building, where further processing and data recording occur.

The improvements help all of Arecibo's areas of study. The three main areas of Arecibo's attention are in atmospheric science, solar system studies and studies of our galaxy and the universe. In extragalactic studies, astronomers studying the large-scale structure of the universe have a much improved ability to measure velocities and masses of galaxies, which in turn could yield clues to the "missing matter" of the universe.

In solar system studies, comets and near-Earth asteroids can be studied in far greater detail with the upgraded radar system. Beyond the solar system, an increasing number of pulsars become accessible, and with the increased sensitivity, new planets, if there, may be found. And Arecibo is well-suited to study the chemistry of star formation. New stars form out of cold clouds of dust and gas, which emit no visible radiation, but the molecular material emits radiation at radio wavelengths in the coldest regions of the galaxy.

In atmospheric studies, the dynamics of the upper atmosphere can be studied in greater detail. Studies of the ionosphere, the region of the Earth's atmosphere above 30 miles (50 km), which consists of ions -- atoms that have lost one or more electrons as a result of solar ultraviolet radiation -- are important for understanding the chemistry of the upper atmosphere, including auroras, thunderstorms, lightning, space debris and meteorites.