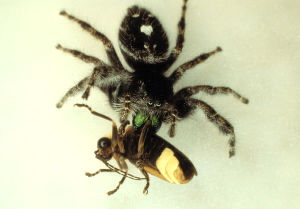 Copyright © 1997 by Thomas Eisner
Wthout lucibufagans from a Photinus firefly, the Photuris firefly is attacked and eaten by a Phidippus jumping spider 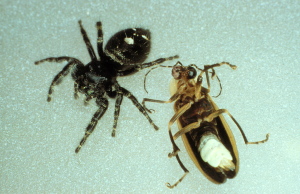 The characteristic flashes that summon male fireflies of the genus Photinus could come from female Photinus fireflies. But just as likely, Cornell University chemical ecologists have discovered, the signaling females are of a different genus, Photuris, and they're not especially interested in courtship.

Rather, the femmes fatales fireflies are luring males close enough to eat them. The males contain defensive chemicals that females need to repel predators, such as spiders. Mimicry and murder provide a lifesaving meal, the Cornell researchers report in the Proceedings of the National Academy of Sciences (Sept. 2, 1997, Vol. 94, pp. 9723-9728).

"But they're hardly bleeding hearts," said Thomas Eisner, Cornell's Schurman Professor of Chemical Ecology and leader of the investigation into firefly fatal attraction. "This is 'reflex bleeding' that commonly occurs when fireflies are disturbed." Tiny droplets of blood from Photinus fireflies -- and from Photuris fireflies that eat them -- contain enough lucibufagin to keep chemically endowed fireflies from being eaten by certain spiders, birds and probably other predatory animals, Eisner said.

The study employed adult fireflies (which entomologists regard as beetles, not true flies) from the Ithaca, N.Y., area, as well as larval fireflies from Montgomery County in Maryland and Alachua County in Florida. The fireflies' chemical repellency was tested with two species of jumping spiders from New York and Florida. And the spiders' response to lucibufagin also was tested with fruit flies (Drosophila melanogaster). When fruit flies were treated in the laboratory with lucibufagin, spiders either left the fruit flies alone or only tasted them. 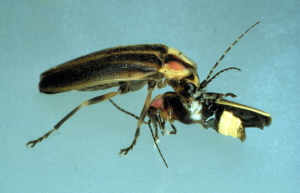 Because the fireflies' defensive compound was found to have a close chemical resemblance to bufalin steroids in the venom of poisonous Chinese toads, the Cornell researchers combined the Latin terms for "light" and "toad," respectively, and coined the word, "lucibufagin." Lucibufagins are plentiful in Photinus fireflies, the scientists found, but not in Photuris fireflies -- unless they were artificially fed with the compound or were able to attract and eat Photinus fireflies.

"To many of us, there's something intriguing and even romantic about fireflies in the night. Certainly some -- but not all -- of those fireflies have romance on their minds," said Eisner, explaining the complex system of flickering "passwords" that luminescent beetles use to locate mates of their own species. "Generally, courting males are the fancy flashers, and they signal with their light organs in characteristic, species-specific patterns of flashes. They watch for females to respond to their pattern with single flashes."

The password from the female of the appropriate species is encoded in the time-delay between the male's flash pattern and her single flash response, the Cornell biologist said. When the male detects his species' characteristic delay-and-flash, he heads for the source. 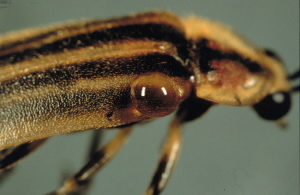 Copyright © 1997 by Thomas Eisner
When disturbed, a firefly (Photuris versicolor) begins "reflex bleeding" and exudes a fluid that contains the defensive compound lucibufagin.

"This strategy -- acquiring ready-made defensive chemicals from other organisms -- turns out to be quite common in nature," Eisner commented. "The more we study insects, the more we find them taking chemical defenses from plants and from other insects. And plants are 'experts' at gleaning useful chemicals from microorganisms.

"We humans are slow learners, but we're starting to catch on," Eisner added. "There's a world of natural products out there with many chemicals, including medicinals, that we can put to use. All we have to do is look for them."