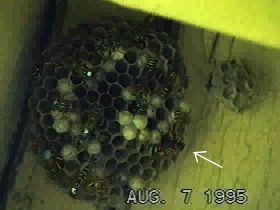 In this frame from video taken by Cornell researchers, a female wasp bites a male worker and stuffs him into a nest cell, probably in order to reduce the food needs of the nest and make more food available to developing larvae.

When female wasps return to the colony after foraging, some females initiate aggressive encounters with males and stuff them -- head first -- into empty nest cells, according to Cornell University research reported in the Oct. 2 issue of the scientific journal Nature. Researchers call this newly discovered insect behavior "male-stuffing."

"It's a strikingly aggressive behavior," said Philip T. Starks, Cornell doctoral candidate in neurobiology and behavior. "In a wasp colony, the behavior is normally somewhat aggressive, but no one has reported this level of aggression between male and female nestmates before. We observed sting threats, mauling, lots of antagonism. Perhaps it has not been reported because 'male-stuffing' lasts only a few seconds and is thus easy to miss."

The article, "Male-stuffing in wasp societies," researched and written by Starks, from Andover, Mass., and Emily S. Poe, a Cornell senior from Endicott, N.Y., appears in the Scientific Correspondence section of Nature. Starks is working on his doctorate with H. Kern Reeve, Cornell assistant professor of biology.

Poe and Starks observed and reported on two categories of the aggressive interaction of the paper wasp, Polistes dominulus. Once food arrives for the colony, the "initial stuffing" begins with antenna-to-antenna contact, followed by grappling, biting and sting threats from the females. (Males do not have stingers.) The female then forces the male into a nest cell, head first. The second category of interaction the researchers observed was labeled "repeated stuffing," which is characterized by the female biting and pushing on the abdomen of the male, whose head and thorax already are in the cell.

The researchers discovered this behavior while watching and transcribing video recordings of interactions within a colony. Starks explained that this behavior, if not seen on videotape, is difficult to spot because ":male-stuffing" happens so fast and since colonies typically have over 30 individuals, a single interaction can easily go unnoticed."

Sixty-six stuffing events were observed during a total of 24 hours of videotape recorded from multiple colonies. The researchers reported that none of the colony's queens stuffed males. Instead, all stuffing was done by worker wasps.

While this behavior may seem strange to humans, the biological logic is sound, according to the researchers. Worker wasps bring food back to the colony and feed the needy reproductive destined larvae -- the colony's next reproducing generation.

"Limiting food consumption by males may maximize the worker's inclusive fitness," Poe said. "If you look at their behavior, it gets the males out of the way. This contributes to the colony's fitness."