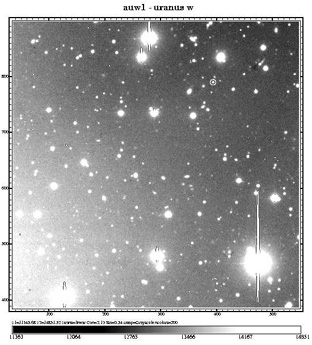 "Discovery image" made Sept. 6, 1997, at the Palomar Observatory by Philip Nicholson, Joseph Burns, Brett Gladman and J.J. Kavelaars. The brighter of the two "new" moons of Uranus, S/1997 U2, is circled in the upper right portion of the frame. S/1997 U1 does not appear in this image. The bright light in the lower left is from the planet, which is out of the frame. The spikes extending from some stars are artifacts of the CCD electronic imaging process.

The objects -- first observed Sept. 6 and 7 by Philip Nicholson and Joseph Burns of Cornell University, Brett Gladman of the Canadian Institute of Theoretical Astrophysics and J.J. Kavelaars of McMaster University, and photographed again by the astronomers in late October -- bring to 17 the number of satellites known to orbit Uranus. After subsequent observations by telescopes in Hawaii and New Mexico, the discovery was confirmed today (Oct. 31) by Brian Marsden of the Central Bureau for Astronomical Telegrams at the Smithsonian Astrophysical Observatory. At the time of discovery, the fainter object was located approximately 6 arc-minutes east of the planet, and the brighter object, 7 arc-minutes to the west-northwest.

Estimated to be only about 50 and 100 miles in diameter, respectively, the two Uranian satellites are the faintest ever detected from the ground and are the first "irregular" moons discovered since 1974, when Jupiter's Leda was found.

The small satellites are termed "irregular" because they apparently follow eccentric and inclined paths, more than 6 million and 8 million kilometers, respectively, from Uranus, rather than the more regular paths followed by most larger satellites in equatorial-plane orbits around planets. They are the first irregular satellites discovered at Uranus; Jupiter is known to have eight irregular satellites, while Saturn and Neptune have at least one apiece.

"They also probably have an irregular -- rather than spherical -- shape," said Burns, the Irving P. Church Professor of Engineering and professor of astronomy at Cornell.

Below (providing your browser supports it), an overlay of three images of S/1997 U2 shows how the moon's image moves while other objects remain stationary.

"The larger of the two satellites appears quite red in color, which may indicate a hydrocarbon surface that was bombarded by energetic particles from space," Burns said, adding that the color of the smaller moon will not be known until astronomers make further observations of the objects. He called them "enormous, irregular lumps of dark ice and gunk" that were once in their own orbits around the Sun until they were "captured" by Uranus.

"We'll get a rough idea of their shape by watching the objects as they rotate, but they really need to be visited by spacecraft to get fine details," said Nicholson, a professor of astronomy at Cornell. "We still know precious little about these irregular satellites."

For now, the two satellites are seen as fuzzy little dots on images made with CCD (charged-couple detector) camera on the Hale telescope. (The fuzziness is due to the light-distorting effect of Earth's atmosphere; had the photographs been taken by the Hubble Space Telescope, the moons would have appeared as more distinct, but smaller, dots.) The astronomers made the discovery by comparing photographs taken one hour apart and looking for objects that had moved through the stationary background field of stars.

The study was supported in part by funding from the National Aeronautics and Space Administration (NASA) and by Cornell University, which underwrites a 25 percent share of observing time at the Palomar Observatory. Gladman, who completed a Ph.D. in astronomy at Cornell in 1996, is a postdoctoral associate at the Canadian Institute of Theoretical Astrophysics at the University of Toronto. Kavelaars is a postdoctoral associate at McMaster University in Hamilton, Ontario.

At present, the newly discovered moons are designated with astronomical code names S/1997 U1 and S/1997 U2. Following additional observations, the objects will be certified by the International Astronomical Union (IAU) as true planetary satellites, and the discoverers will be allowed to suggest more lyrical names. By astronomical convention, the planet's previously discovered moons, including the last 10 found by the Voyager spacecraft in 1986, carry names, such as Cordelia, Ophelia and Ariel from works by Shakespeare and Pope.

"I guess that precludes my preference," Nicholson joked, "for naming a moon after my cat, Squeaker." Certification by the IAU of newly discovered planetary bodies can take up to two years, he said.

Meanwhile, Burns said, the discovery of two irregular objects orbiting far from a giant planet "gives us one more clue to what the environs of Uranus must have been like soon after its formation."

Some technical details are available at Brett Gladman's page