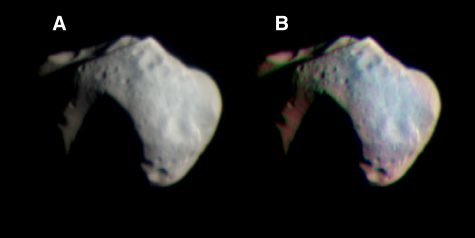 Provided.
At left, approximate true color image of Mathilde with brightness enhanced. At right, small visible-color differences have been highly enhanced and overlain on a 550-nanometer fliter image of Mathilde.

So many craters, so little asteroid.

Cornell University astronomer Joseph Veverka and a team of scientists are releasing the first close-up images of a little-known C-class asteroid, 253 Mathilde, to be published exclusively in the journal Science (Dec. 19). Until now, astronomers have been able to do little but gaze through telescopes and observe the minor planet, discovered 112 years ago. On June 27 of this year, the Near Earth Asteroid Rendezvous (NEAR) spacecraft passed within 1,212 kilometers of Mathilde and took images of the asteroid. Scientists didn't expect to find the minor planet so densely pocked with craters and so porous, as it is made mostly of carbonaceous chondrite.

"Mathilde is very porous, and we still don't know if it was formed that way originally," said Veverka. "This is the first time anyone has ever looked at an asteroid like this and we were surprised at how 'underdense' it is on the inside."

After reviewing 534 frames of images taken with a variety of equipment during the close flyby in June, scientists were surprised to find so many large craters packed so tightly on the relatively small surface of Mathilde. This means that large objects have been able to strike the asteroid's surface without destroying it, Veverka said. "Hitting Mathilde is like hitting a Styrofoam cup or packing material," he said. 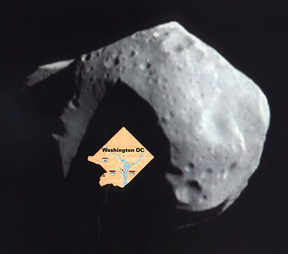 Jonathan Joseph, Cornell University
A map of Washington, DC, to scale, shows the size of the asteroid.

"Even more remarkable than the simple existence of these large craters is the degree to which their rim crests and basic shapes seem minimally affected by subsequent large impacts," scientists write in the article describing the images, "NEAR's flyby of Mathilde: Images of a C Asteroid." The article's authors include Veverka and Cornell scientists Peter Thomas, senior research associate; Ann Harch, research support specialist; Beth Clark, research associate; James F. Bell III, senior research associate; Brian Carcich, systems programmer, and Jonathan Joseph, programmer, all in the astronomy department. In addition to the Cornell members of the NEAR team, astronomers from the Southwest Research Institute, Boulder, Colo.; Northwestern University; Space Science Systems, San Diego, Calif.; the University of Maryland, College Park; and Johns Hopkins University's Applied Physics Laboratory participated in the image analysis and the writing of the paper.

Currently, the NEAR spacecraft is on its way to the S-class asteroid 433, named Eros. Enroute to Eros, NEAR flew by Mathilde on June 27 to gather information. At a flyby speed of 9.93 kilometers a second, the spacecraft spent about 25 minutes relatively close to the asteroid. During its closest approach, the spacecraft took 144 high-resolution images of the minor planet's irregular shape and heavily cratered surface.

The slow-rotating Mathilde resides in the asteroid belt, which contains thousands of minor planets between Mars and Jupiter. At the time the images were taken, Mathilde was approximately 203 million miles from Earth. Mathilde rotates once every 17.4 days; only two other known asteroids rotate more slowly: 288 Glauke and 1220 Crocus.

Bob Farquhar, Johns Hopkins University
Below, Schematic timeline of the NEAR flyby, summarizing the main imaging sequences of 534 frames.

"That's one of the other mysteries of Mathilde," said Veverka . "It is so sluggish and we still don't know why."

Launched aboard a Delta II rocket on Feb. 17, 1996, the NEAR spacecraft mission cost NASA about $122 million and is the first of NASA's Discovery Missions, which include a series of small-scale spacecraft designed to proceed from development to flight in under three years for a cost of less than $150 million each. In February 1999, the spacecraft will rendezvous with Eros and orbit that minor planet for about a year.