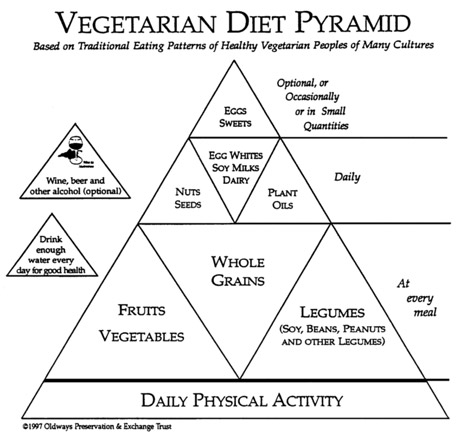 To offer a healthful alternative to the 1992 U.S. Food Guide Pyramid, which lumps some animal and plant foods together in a single group, Cornell University and Harvard University researchers have teamed up with other experts to assist the non-profit foundation Oldways Preservation & Exchange Trust in unveiling an official Vegetarian Diet Pyramid.

The food recommendation pyramid, released at the three-day International Conference on Vegetarian Diets held in Austin, Texas in November, is intended to publicize the well-balanced ovo-lacto vegetarian diet of healthy vegetarian people of many cultures, which research has increasingly shown to be linked to much lower rates of certain cancers, heart disease, obesity and, in some cases, osteoporosis and other chronic, degenerative diseases found in the United States.

The Vegetarian Diet Pyramid emphasizes a wide base of foods to be eaten at every meal, including fruits and vegetables, whole grains (oats, wheat, whole grain bread, barley, couscous, noodles, pasta, corn) and legumes (soy, beans, peanuts and other legumes). The middle band to be eaten from daily includes nuts and seeds, egg whites, dairy and soy cheese, milk (almond, dairy, rice and soy) and plant oils. The top tip of the pyramid are optional foods or foods to be eaten occasionally or in small quantities and includes eggs and sweets.

Daily physical exercise and plenty of water are stressed. A moderate intake of wine, beer and other alcohol is considered optional because of positive heart-health benefits for individuals who are not at risk.

The Vegetarian Diet Pyramid was developed by nutrition scientists and medical specialists from the Cornell-China-Oxford Project on Nutrition, Health and Environment, which is based at Cornell; the Harvard School of Public Health; and the Oldways Preservation & Exchange Trust, a non-profit food-issues educational organization in Cambridge, Mass., whose mission is to preserve traditions and foster cultural exchanges in the fields of food, cooking and agriculture.

"This pyramid reflects the growing body of research that suggests that Americans will not reduce their rate of cancers, cardiovascular disease and other chronic, degenerative diseases until they shift their diets away from animal-based foods to plant-based foods," said T. Colin Campbell, Cornell professor of nutritional biochemistry, one of the scientists who helped develop and present the pyramid at the conference and the director of the Cornell-China-Oxford Project, a massive survey of more than 10,000 families in mainland China and Taiwan designed to study diet, lifestyle and disease across the far reaches of China.

By investigating simultaneously more diseases and more dietary characteristics than any other study to date, the project has generated the most comprehensive database in the world on the multiple causes of disease. Much of the research behind the pyramid is based on the China project's research findings.

"Merely eating some low-fat foods or complying with current U.S. dietary recommendations is unlikely to prevent much disease," Campbell said. "Evidence suggests that eating even small amounts of animal-based foods is linked at least for many individuals to significantly higher rates of cancers and cardiovascular diseases typically found in the United States."

"The new pyramid helps mark the entry of vegetarian eating into the American mainstream," he said.

Gifford and Campbell point out that the U.S. Food Guide Pyramid is misleading in that it no longer reflects the most recent Dietary Guidelines for Americans (1995) issued by the U.S. government, which endorses the healthfulness of vegetarian eating. Yet, the Food Guide Pyramid still appears on billions of food packages.

The Vegetarian Pyramid is the fourth pyramid developed in a series of conferences, Public Health Implications of Traditional Diets, sponsored by Oldways and the Harvard School of Public Health, that consider diverse dietary traditions around the world. Oldways' other pyramids focus on traditional diets found in specific geographic regions, including the Mediterranean, Latin America and Asia. As with the other Oldways diet pyramids, the new pyramid is subject to revision in light of ongoing nutrition research.