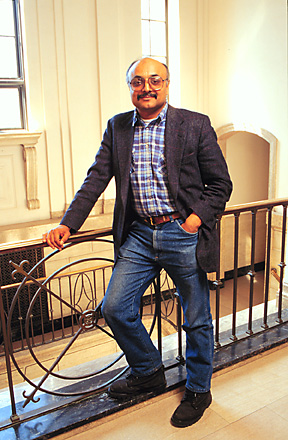 His appointment, effective April 1, 1998, was approved by the Cornell Board of Trustees at its March 27 meeting in Ithaca.

Kanbur, who has published in highly regarded and competitive journals in the field of economics, was recruited from the World Bank, where he most recently served as principal adviser in the office of the senior vice president and chief economist. Prior to joining the World Bank in 1989, his academic career included chairs in economics at the University of Essex and the University of Warwick, as well as two years as Visiting Professor of Public and International Affairs at Princeton University. While with the World Bank, he held visiting appointments at Oxford, Princeton and Columbia universities.

"I am pleased to welcome Professor Kanbur to the Cornell faculty," said Provost Don M. Randel. "In addition to his international distinction as a scholar and political leader, he also has a passion for teaching. The confluence of his interests with the focus of the position makes it especially appropriate that he is the first holder of the Lee Teng-hui Professorship. We are proud of Cornell's century-old China connection, which has produced an active exchange of students and scholars in many fields, and which is celebrated by the Lee Teng-hui Professorship."

The professorship honors Lee Teng-hui, president of Taiwan, who earned his Ph.D. in agricultural economics at Cornell in 1968. Made possible by a $2.5 million endowment gift to Cornell in 1994, presented anonymously by friends of Lee in Taiwan, the professorship is designed to be a joint appointment between the Department of Agricultural, Resource and Managerial Economics in the College of Agriculture and Life Sciences and the Department of Economics in the College of Arts and Sciences. The endowment also supports a graduate student fellowship in one of those departments or in Asian Studies.

Kanbur was selected after an international search to identify a distinguished economist for the Lee Teng-hui Professorship. His research focuses on the economics of risk taking, inequality and poverty, particularly in the problems of developing countries, and it ranges from the highly conceptual, theoretical and mathematical, to the empirical, applied and policy oriented.

Widely published in journals in the field of economics, Kanbur serves on or has served on editorial boards for the Review of Economic Studies, Economic Policy, The World Bank Economic Review and The World Bank Research Observer, the Journal of African Economics and the Revue d'Economie du Developpement.

In 1991, Kanbur was awarded the Quality of Research Discovery Award by the American Agricultural Economics Association. He was invited to deliver the first annual Social Science Lecture of the Ghana Academy of Arts and Sciences in 1993.