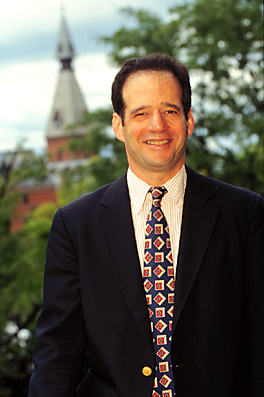 ITHACA, N.Y. -- "I am tired and sick of war," said William Tecumseh Sherman. "Its glory is all moonshine. It is only those who have neither fired a shot nor heard the shrieks and groans of the wounded who cry aloud for more blood, more vengeance, more desolation. War is hell."

Yet human beings have nearly always gone to war quickly and with great zeal.

"We're coming to the end of what might well be the bloodiest century in human history," said classics and history Professor Barry S. Strauss, director of Cornell University's Peace Studies Program. Yet in the first millennium, when the Assyrians conquered the Near East, enemies were flayed alive and their skulls piled high. "Virtually nobody was anti-war back then."

So despite the global wars this century, the Holocaust, the continuing proliferation of nuclear weapons, the dozens of smaller wars and slaughters, the body counts numbering in the tens of millions, Strauss remains guardedly optimistic.

"The very existence of the United Nations is encouraging," Strauss said. "And the fact hat we've lived the last 50 years under the shadow of humanity's ability to destroy itself has, I think, awakened us to some small extent."

"We encourage interdisciplinary studies," Strauss said, "and we encourage alternate ways of seeing the paradigm." Students and faculty members involved in Peace Studies are drawn from Cornell's colleges of Arts and Sciences; Engineering; Architecture, Art and Planning; Agriculture and Life Sciences; and its Law School. Within Arts and Sciences alone, faculty and graduate students from government, history, classics, anthropology, chemistry and physics participate in the program. Peace Studies is affiliated with Cornell's Einaudi Center for International Studies.

"Sometimes," Strauss said, "as outsiders in the field, as scholars who don't teach, say, in a military academy or war college, we may have disadvantages in knowledge but advantages in perspective."

Strauss first came upon the writer who would shape and determine his career, the Greek historian Thucydides, as an undergraduate history major at Cornell in the early 1970s. The United States was still mired in the Vietnam War, as Athens had been mired in the Peloponnesian War. "I was amazed at how familiar Thucydides seemed," Strauss said. "Thucydides was a losing general who was exiled from Athens because of his military failures.

"He was very smart, very cynical, bitter and extraordinarily even-handed as a historian. He wrote about the corruption of language that occurs in a culture that wages war, about the sense of failure and the demoralizing influence of war on a democracy. Athens had lost its leader Pericles, just as America had lost JFK."

Strauss' grandfather was in a machine gun unit in France during World War I, and his father fought in the U.S. infantry in Italy in World War II. "Although my father didn't talk readily about his war years," Strauss said, "I grew up with this clear sense of how hard the war had been."

Strauss went on from Cornell to earn a Ph.D at Yale University, to lecture at the U.S. Naval War College and the U.S. Naval Academy, and has written or co-authored a half-dozen books, including The Anatomy of Error: Ancient Military Disasters and Their Lessons for Modern Strategists (St. Martins Press, 1990), which historian David McCullough called, "An ingeniously focused, very valuable book, fascinating from beginning to end."

Strauss returned to Cornell as a faculty member in 1981.

One of the themes of Strauss' current research is the lessons of comparative history.

"One of the best ways of understanding where the world is heading today is to take the long view," Strauss said, "the very long view, all the way back to the third millennium B.C. Many contemporary observers, whether of the left or the right, agree on a linear view of history: we have entered a unique, new age, whether of globalization or single-superpower hegemony or a telecommunications revolution or post-modern culture. The truth of the matter is better captured by the ancient Greco-Roman idea that history is cyclical.

"Today's world is less brave and new than familiar. Again and again over the millennia, history has witnessed proclamations of global peace after periods of cold or hot war, but the reality rarely lives up to the ideal. Our world is a lot like that of the Hellenistic era of the Mediterranean and Near East in the several centuries following the death of Alexander the Great: a society that had a shared international culture (at least at the elite level), an ideal of globalization, but a reality of interstate competition, often violent competition."

Next year Strauss will be a Rockefeller Visiting Fellow in the Center for Human Values at Princeton University, where he will work on a comparative project on conscription and citizenship in antiquity and the 20th century.

Peace will always be elusive. But Strauss remains hopeful. "We know now," he said, "that peace requires enormous effort, that you have to work at peace, that peace is not self-enforcing. We're much more on the lookout for danger now than we used to be, and maybe it's some small sign of progress that in the last 50 years, small wars are prevalent and global wars, one hopes, may be and seem to be a thing of the past."

Peace Studies was established at Cornell in 1970 as an interdisciplinary program concerned with problems of peace and war, arms control and disarmament and, more generally, instances of collective violence. Its broad objectives are to support graduate and post-doctoral study, research, teaching and cross-campus interactions in these fields. The program also has a public service component; its members collaborate with organizations outside Cornell in analyzing important national and international issues and making recommendations for action.

The program has been funded by the university as well as by Ford and MacArthur foundation grants that have helped create an endowment for Peace Studies.