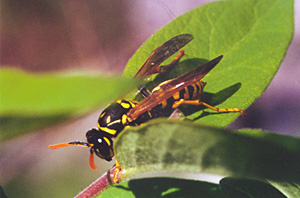 Scientists once believed that a wasp queen took over another queen's nest only if her own nest had been destroyed. That's wrong.

A Cornell University researcher has found that certain female paper wasps (Polistes dominulus), without nests of their own, "sit and wait" for an opportunity to adopt orphaned nests or hijack nests from other queens. "If paper wasps could talk, Jerry Springer would have a month full of guests on his TV talk show," says Philip T. Starks, a Cornell doctoral candidate in animal behavior, whose research is being published today (Aug 7) by Britain's Royal Society.

"This is risky behavior. From an evolutionary perspective, if females don't get a nest, they won't get offspring in the next generation," says Starks. "We all know people who sit and wait for others to do things for them, but who would have thought we'd see the same behavior in insects?"

Are the wasps acting like cuckoos because they are lazy or just plain mean?

"We've known about usurping and adopting for a long time, but we thought the queens came from destroyed nests or were subordinate queens who had left their previous nests. The fact is, in the field we didn't know where they all came from. Obviously, adopting is not the only reproductive strategy that wasps engage in, but it is a strategy that can have a high pay off," says Starks. 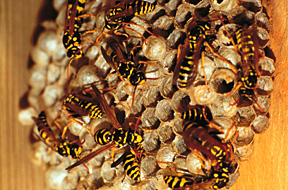 These sit-and-wait female wasps prefer to adopt the most mature nests, probably because these nests will produce workers the soonest, and colonies with workers are very likely to survive. Starks explains that once a queen adopts a nest she will eat the former queen's eggs and young larvae and replace them with her own eggs. The older larvae and pupae, which belonged to the former queen, are allowed to complete development and may eventually help rear the adopting female's offspring.

Polistes dominulus are non-indigenous to the United States. Starks explains that the species arrived from Europe about 20 years ago and settled in Massachusetts. From there, the insects moved through New York sometime during the past decade and have spread to theMidwest. Ferocious hunters, paper wasps feast on caterpillars.

"If you have a garden and you want to get rid of caterpillar pests, get some paper wasps. That'll take care of them," Starks says.

Starks' paper, "A novel 'sit and wait' reproductive strategy in social wasps, " was published in the Aug 7 issue of the journal The Proceedings of the Royal Society.