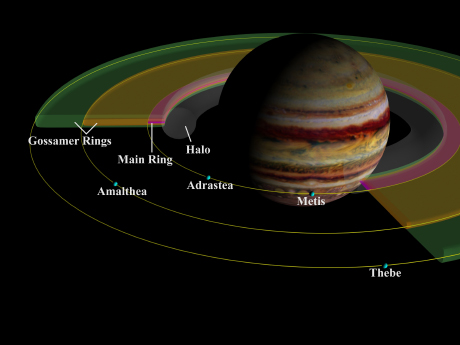 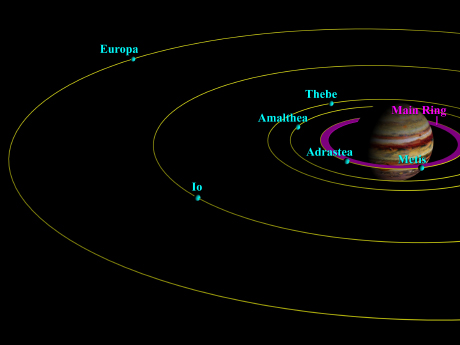 Jupiter's intricate, swirling ring system is formed by dust kicked up as interplanetary meteoroids smash into the giant planet's four, small inner moons, according to scientists studying data from NASA's Galileo spacecraft. Images sent by Galileo also reveal that the outermost ring is actually two rings, one embedded within the other.

The findings were announced today by scientists from Cornell University and the National Optical Astronomy Observatories (NOAO), Tucson, Ariz., at a Cornell news briefing. "We now know the source of Jupiter's ring system and how it works," said Joseph Burns, Cornell professor of astronomy and the Irving Porter Church Professor of Engineering, who reported on the first intimate analysis of a planet's ring system, along with Cornell research associate Maureen Ockert-Bell, Joseph Veverka, professor of astronomy and planetary sciences at Cornell, and Michael Belton of NOAO.

"Rings are important dynamical laboratories to look at the processes that probably went on billions of years ago when the solar system was forming from a flattened disk of dust and gas," Burns explained. Furthermore, similar faint rings probably are associated with many small moons of the solar system's other giant planets. "I expect we will see similar systems at Saturn and the other giant planets" Burns said.

In the late 1970s, NASAs two Voyager spacecraft first revealed the structure of Jupiter's rings: a flattened main ring and an inner, cloud-like ring, called the halo, both composed of small, dark particles. One Voyager image seemed to indicate a third, faint outer ring. New Galileo data reveal that this third ring, known as the gossamer ring because of its transparency, consists of two rings. One is embedded within the other, and both are composed of microscopic debris from two small moons, Amalthea and Thebe.

"For the first time we can see the gossamer-bound dust coming off Amalthea and Thebe, and we now believe it is likely that the main ring comes from Adrastea and Metis," Burns said. "The structure of the gossamer rings was totally unexpected," Belton added. "These images provide one of the most significant discoveries of the entire Galileo imaging experiment."

Galileo took three dozen images of the rings and small moons during three orbits of Jupiter in 1996 and 1997. The four moons display "bizarre surfaces of undetermined composition that appear very dark, red and heavily cratered from meteoroid impacts," Veverka said. The rings contain very tiny particles resembling dark, reddish soot. Unlike Saturn's rings, there are no signs of ice in Jupiter's rings.

Scientists believe that dust is kicked off the small moons when they are struck by interplanetary meteoroids, or fragments of comets and asteroids, at speeds greatly magnified by Jupiter's huge gravitational field, like the cloud of chalk dust that rises when two erasers are banged together. The small moons are particularly vulnerable targets because of their relative closeness to the giant planet.

"In these impacts, the meteoroid is going so fast it buries itself deep in the moon, then vaporizes and explodes, causing debris to be thrown off at such high velocity that it escapes the satellite's gravitational field," Burns said.

If the moon is too big, dust particles will not have enough velocity to escape the moon's gravitational field. With a diameter of just five miles (eight kilometers) and an orbit that lies just at the periphery of the main ring, tiny Adrastea is "most perfectly suited for the job."

As dust particles are blasted off the moons, they enter orbits that are much like those of their source satellites, both in their distance from Jupiter and in their slight tilt relative to Jupiter's equatorial plane. A tilted orbit wobbles about a planet's equator, much like a Hula-Hoop twirling around a person's waist. This close to Jupiter, orbits wobble back and forth in only a few months.

Because the swarm of dust grains all have very similar orbits, varying only in the orientation of the Hula-Hoop, all the dust particles orbiting together form a disc shaped like a washer. This explains why, in Galileo's close-up, edge-on view the ring-tip profiles are rectangular rather than the familiar elliptical arc seen on Saturn's rings and Jupiter's main ring. 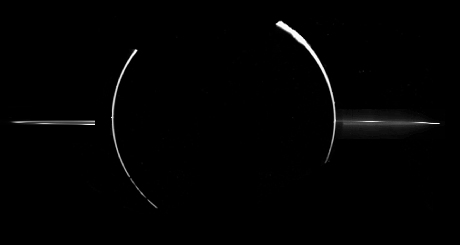 Provided
A mosaic of Jupiter and the rings.

The top and bottom edges of the gossamer rings are about two to three times brighter than the body of the rings. As Amalthea and Thebe move up and down in their orbits around Jupiter's equatorial plane, they pause as they reverse directions at the top and bottom of their paths, Ockert-Bell explained. Particles coming off these moons have similar tilts and are more visible at the upper and lower reaches of the satellites' orbits. "It's amazing that these satellites and ring edges correspond to the satellites' positions," she said.

The innermost halo ring appears to contain escaped particles from the main ring, Burns said. The particles are electrically charged and are pushed by Jupiter's enormous electromagnetic force, which causes clouds of particles to "bloom" into a vast cloud slowly drawn down into the planet.

Galileo has been orbiting Jupiter and its moons for 2-1/2 years and is currently in the midst of a two-year extension, known as the Galileo Europa Mission. JPL manages the Galileo mission for NASA's Office of Space Science, Washington, D.C. JPL is a division of The California Institute of Technology in Pasadena.

The new images, and further information on this discovery and the Galileo mission, are available on the Internet at the Galileo web site: http://www.jpl.nasa.gov/galileo. A streaming video copy of the entire press conference is available for viewing on the web at http://www.odl.cornell.edu/jupiter. Viewing this presentation requires Microsoft Netshow software, which can be downloaded at http://www.dl.cornell.edu/download.htm (requires a PC running Windows 95/98).

The following are additional facts related to the discovery of the source of the rings of Jupiter, announced by the Galileo spacecraft scientific team at a press conference at Cornell University Sept. 15.

Voyager program - Voyager 1 and Voyager 2 were launched by NASA in 1977. In 1979 Voyager 1 obtained the first images of a ring system around Jupiter. The same year, most of the important observations of Jupiter's rings were provided by Voyager 2. In just one image the spacecraft captured a faint outer ring, apparently made up of fine, microscopic particles. This was named the gossamer ring.

Galileo spacecraft - Launched by NASA in 1989, the Galileo spacecraft has provided the first close images of asteroids (Gaspra, 1991; Ida and its moon, Dactyl, 1993). The spacecraft also captured images of the Comet Shoemaker-Levy 9 as it hit Jupiter. Galileo arrived at Jupiter on Dec. 7, 1995, and released an atmospheric probe that plunged into Jupiter's atmosphere and relayed information on the structure and composition of the planet. In the 2 1/2 years since then, Galileo has orbited the planet, studying Jupiter and its four largest moons - Callisto, Europa, Ganymede and Io. Its current journey, the Galileo Europa Mission, will continue through 1999.

Jupiter - The solar system's largest planet and the fifth planet from the sun (distance: 778.3 million kilometers, or 483.6 miles), it is a gaseous planet with an atmosphere composed mostly of hydrogen and helium with traces of methane, ammonia and other gases.

Rings of Jupiter - Galileo's high-quality images have provided greatly improved information about the rings' structure. The rings are very tenuous; only about one-millionth of the surface area is covered, and the rings contain many particles of microscopic size.

Gossamer ring - The ring actually consists of two faint, fairly uniform rings, one enclosing the other, visibly spreading from the outer boundary of the main ring and fading somewhere beyond 221,000 kilometers (136,000 miles) from the center of Jupiter, at Thebe's orbit. The denser, enclosed gossamer ring extends radially inward from Amalthea's orbit at 181,000 kilometers (112,000) from Jupiter's center, while the fainter ring is situated interior to Thebe's orbit at 222,000 kilometers (138,000 miles). As Amalthea's orbit is crossed, the ring's brightness drops to one-fifth, while near Thebe's path the drop is by a factor of three. Both rings have cross-sections that are crudely rectangular. A striking feature of both rings is that each is banded with top and lower edges brighter than the centers.

Halo - The innermost component of the Jovian ring system is a toroidal halo extending radially from about 92,000 kilometers (57,000 miles) to about 122,500 kilometers (76,000 miles). Its brightness decreases with the height of the equatorial plane and decreases as the planet is approached. The halo is actually a nimbus of fine particles that 'blooms' vertically at the main ring's inner boundary and continues toward the planet and vertically.

Moons of Jupiter - Sixteen moons have been discovered since 1610. In addition to Io, Europa, Ganymede, and Callisto, the four largest Galilean moons, Jupiter has two groups of small satellites. Four orbit closer than Io, and eight orbit well beyond Callisto. The four moons identified as ring moons, supplying the ring systems, are the inner moons, Metis, Adrastea and Thebe, discovered by Voyager 1, and Amalthea, first seen by Edward Barnard in 1892. Galileo images have provided more detailed shape, color and photometric information on these four inner small satellites than was provided by the Voyager images. The satellites are in synchronous rotation and their major geologic features are impact craters. The Galileo observations are the first time that Metis, Adrastea and Thebe have been seen as more than points of light.

Metis - This moon is embedded within the main ring. Its longest dimension is about 60 kilometers (37 miles) across.

Adrastea -This moon, the smallest of the four satellites, skims along the main ring's outer edge, but details of its actual shape are not available. Its longest dimension is 20 kilometers (12 miles) across.

Amalthea - This moon, the largest of the four inner moons, lies at the outer periphery of the inner gossamer ring. A digital image map shows crater rims and bright markings. The largest crater, Pan, appears to be bowl-shaped and 90 kilometers (54 miles) wide. A bright spot at the south pole is associated with a smaller crater named Gaea. Amalthea's longest dimension is 247 kilometers (154 miles) across.

Thebe - This moon is near the outer periphery of the outer gossamer ring. Galileo images show the satellite to have bright spots near the rim of one large crater. Its longest dimension is 116 kilometers (72 miles) across.