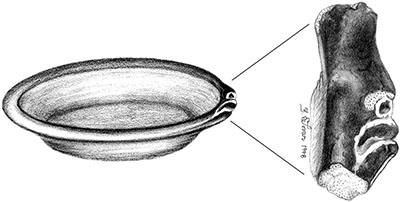 Provided
Reconstruction drawing of a serving vessel, approximately 12 inches wide with a glossy black finish, and dated 1100-900 B.C., from a pottery fragment with an Olmec-style face unearthed at the Puerto Escondido site in Honduras.

Digging through history to a time before agriculture, archaeologists from Cornell University and the University of California at Berkeley have found evidence of a village that was continuously occupied from 2000 B.C. to A.D. 1000 as well as hints to the secret of the community's remarkable longevity.

"My guess is, it all comes down to chocolate," says John S. Henderson, professor of anthropology at Cornell and co-director, together with Rosemary Joyce of Berkeley, of the archaeological dig at Puerto Escondido, Honduras. The type of ceremonial pottery uncovered by the archaeologists points to that region of Mesoamerica as a possible "Cradle of Chocolate."

Excavations in the lower Ulúa river valley of northwestern Honduras, conducted by the North American scientists under the auspices of the Honduran Institute of Anthropology and History, have added at least 1,000 years to the documented story of a region where a hunting-and-gathering society settled and skilled pottery-makers flourished. 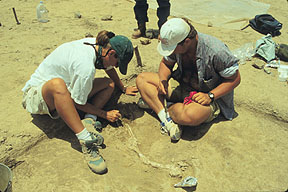 "Our deepest excavations at Puerto Escondido show building activity and obsidian tools but no pottery," Henderson says. "The pottery we're finding, dating between about 1100 and 900 B.C., shares the shape and decorative style of pottery from communities to the west, in present-day Mexico -- the Olmec art style of Mesoamerica's first civilization." The same site also is yielding pre-Olmec pottery made between 1600 and 1100 B.C., the earliest known period of pottery-making in Meso- and upper-Central America.

The author of The World of the Ancient Maya (Cornell University Press, 1997), Henderson says the Olmec people rose from the Neolithic culture of Mesoamerica and held forth until about 500 B.C., at which time the later and better-known civilizations of the Maya, Zapotec and Teotihuacanos were in their formative stages. Olmecs are generally associated with the Veracruz and Tabasco regions of Mexico, and the Puerto Escondido discoveries make that ancient village the eastern-most known site of Olmec activity.

One possible explanation for similar pottery styles is trade among geographically separated peoples. The question for Henderson and Joyce became: What social mechanisms were responsible for the similarities in pottery?

"Trade is a typical interpretation," says Joyce, the director of the Phoebe Hearst Museum of Anthropology and associate professor of anthropology at UC-Berkeley. "But we suggest a more complex web of social relations, possibly centering on marriage relations between prominent families in separate areas. Access to Ulúa valley cacao would be an important factor motivating distant partners."

"Historic records show that when the Spaniards arrived, the best chocolate in all of Mexico and Central America was growing in the Ulúa valley," Henderson says, noting that the finest cocoa beans come only from intense cultivation and special preparation techniques. "Cocoa beans were so valuable, they were a form of currency for the Aztecs, the late Maya and presumably their predecessors. It was a place where money literally grew on trees."

Provided
Location of the lower Ulúa Valley, site of the Cornell-Berkeley excavations.

Adding to evidence of the chocolatl connection (to use the Aztec word for "warm liquid") is the type of pottery archaeologists are finding at Puerto Escondido: small, delicate vessels used for drinking. Not surprisingly, the Cornell and Berkeley archaeologists also are finding heavier, more utilitarian pots for cooking and food storage. But it is the delicate pottery, with its similarity to styles found farther to the West, that proves most intriguing.

Many of the small Olmec vessels are decorated with symbols of the supernatural, indicating their ceremonial use in rituals by the elite of the community, Joyce and Henderson report. Most likely, Henderson says, the royal liquid in the Olmec ceremonial vessels was chocolatl, centuries later craved by Emperor Montezuma, who reportedly drank 50 portions a day.

"The Ulúa valley was an ideal place to grow cacao, which needs the understory shade of other trees and rich soil," Henderson says, adding that the valley also was a likely gateway for the introduction of cacao, which is native to South America, to Mexico and upper Central America. The rich, alluvial soil has been accumulating in the Ulúa valley for thousands of years and is found between successive levels of occupation in the village Henderson and Joyce are excavating. Newer and newer versions of the community, they have determined, were built upon the burned or flooded remains of the previous ones.

As they prepare to resume excavations at Puerto Escondido in 1999 and puzzle over the discoveries made so far, the Berkeley and Cornell archaeologists sometimes mix up a mug of instant cocoa. It is a poor imitation of the elite drink they believe may have drawn together distant peoples for 3,000 years.