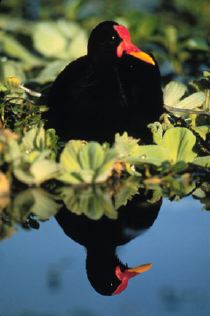 Natalie Demong
The male jacana suspects he's not related to all the chicks in his nest. But he doesn't dare leave because female jacanas have lost the ability to care for their young.

Seduced by a domineering, two-timing female and then largely abandoned to raise young that aren't his own, the male wattled jacana would seem to be a loser in the genetic lottery. But the tropical shorebird has some consolations:

Reporting tomorrow (Dec. 22, 1998) in the Proceedings of the Royal Society of London Series B, Cornell University biologists Stephen T. Emlen and Peter H. Wrege, and Michael S. Webster of the University of Buffalo explain the costs and benefits behind one of the animal kingdom's most extreme examples of sex-role reversal and cuckoldry.

The scientists observed wattled jacanas (scientific name Jacana jacana) over a six-year period on Panama's Chagres River, witnessing more than 1,400 noisy copulations between dominant females and much smaller males. The males were left for weeks to incubate eggs and then, as single parents, to raise chicks of uncertain paternity for two more months.

The females, meanwhile, were copulating with other males. Jacanas are practically unique among vertebrate animals, in that females pair simultaneously with a harem of males (a mating system called polyandry) and the males perform essentially all of the care of the young.

The biologists made DNA fingerprints of 465 adult and juvenile birds. Genetic fingerprinting told the scientists which jacana chicks were carrying the nesting males' genes. Specifically:

"These results are surprising," comments Emlen, the Jacob Gould Schurman Professor of Behavioral Ecology at Cornell. "Biologists have assumed that males would only bear full parental responsibility for incubating eggs and raising the young under one condition: When there is certainty that the young are genetically his own -- that is, when the male's assurance of paternity is high. Instead, a male jacana sits on the nest, watching the mother of the chicks he will raise, while she continues to mate with other males nearby."

Biologists study these unusual cases of sex-role reversal and conspicuous polyandry not out of perverse curiosity, but to learn more about decision-making among the majority of animal species, explains Wrege, a senior research associate at Cornell.

"In cases of bi-parental care and supposedly monogamous pairing," Wrege says, "the male often doesn't know his risk of cuckoldry because copulations are secretive and take place on neighboring territories, out of his sight. Male jacanas, however, seem well aware of their females' sexual behavior. Sexual solicitations and copulations among jacanas are noisy and conspicuous. They are not performed secretively."

But why does the male jacana tolerate this behavior by his mate? Trying to understand, the biologists compared the cuckholded jacanas to males of other bird species in which care-taking of the young is a shared enterprise.

"In a socially monogamous species in which parental care is shared, a cuckholded male can reduce his contribution to parental care," Wrege says. "The male jacana, however, doesn't have that option because female jacanas don't have parental care in their behavior repertoire. Male jacanas seem to understand that if they abandon mixed-parentage chicks, all the young -- including their own -- will die."

Simultaneous polyandry is beneficial for female jacanas, notes Emlen, an evolutionary biologist who tries to explain the advantage of inherited behaviors for various animal species and for individuals in each species. "If a large, dominant female can maintain a harem," Emlen says, "her reproductive success is enhanced by having lots of males raising young for her. But the males may pay the cost. There thus is sexual conflict over the preferred mating system. Females benefit from pairing polyandrously; males, however, would avoid the cost of cuckoldry if they paired monogamously."

Another field observation by the biologists helps explain why male jacanas put up with such an unfair system: In heavily populated and highly competitive habitats with limited space for nests some males never get the chance to reproduce at all.

"I guess you could say the males are lucky to be seduced and abandoned, considering the alternative," Wrege says. "At least they're adding something of their own to the gene pool."

The study was funded by the National Science Foundation, the Smithsonian Tropical Research Institute and the Fulbright Scholar Program.