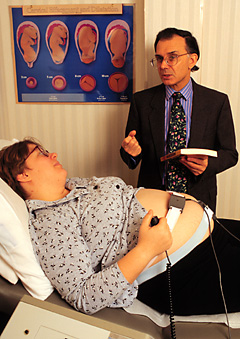 Presenting the case that a lifetime of poor health -- from coronary artery disease and stroke to obesity and diabetes -- can start with poor conditions in the womb, Cornell University researcher and author Peter W. Nathanielsz, M.D., Ph.D., imagines three futuristic scenarios resulting from publication of his latest book, Life in the Womb: The Origin of Health and Disease (Promethean Press, 1999), which argues that adults may eventually suffer diseases of the heart, liver, pancreas and kidneys because those organs were incompletely formed during vulnerable periods of development in the womb:

-- Pregnant women will be encouraged to take better care of themselves and their unborn children by avoiding nicotine, alcohol and other drugs. Policy-makers and society at large will bolster the health of future generations by ensuring adequate prenatal care, removing undue stress about economic issues and providing better nutrition for women of child-bearing age.

-- Health insurers will require applicants to divulge their birth weight and hospitals will be required to record the weight of placentas.

-- Tort lawyers might develop a new legal specialty, encouraging children to sue their mothers for "sub-optimal" conditions in the womb.

Nathanielsz hopes that tort lawyers will ignore his book. But the Cornell professor of reproductive medicine wouldn't mind if pregnant women, policy-makers in government, the insurance industry and the general public heed the message from what, he says, is an emerging scientific consensus about "fetal programming" -- an ounce of prevention is worth a pound of cure.

According to the fetal programming theory(See "Ten Principles of Programming," attached.) , the developing fetus responds to nutritional and oxygen shortages by diverting precious resources to the one organ it absolutely needs at the time -- the brain -- at the expense of organs it will need in later life.

From Life in the Womb: The Origin of Health and Disease by Peter W. Nathanielsz, M.D., Ph.D.

1.) During development, there are critical periods of vulnerability to "suboptimal" conditions. Vulnerable periods occur at different times for different tissues. Cells dividing rapidly are at greatest risk.

2.) Programming has permanent effects that alter responses in later life and can modify susceptibility to disease.

5.) The placenta plays a key role in programming.

6.) The developing baby will attempt to compensate for deficiencies in the womb. But that compensation carries a price in later life.

7.) Attempts made after birth to reverse the consequences of programming might have their own unwanted consequences.

9.) The effects of programming might pass across generations by mechanisms that do not involve changes in the genes.

10.) Programming often has different effects in males and females.

A nutritionally challenged fetus also is believed to grow a larger placenta as a means of securing more nutrients from the mother's blood. Thus, the two most obvious signs of fetal malnutrition are a low birth-weight baby and a disproportionately large placenta. However, an underweight infant -- if it survives -- might carry an incompletely formed liver that can't properly regulate cholesterol, a pancreas that will lose the ability to produce insulin or a heart predestined to disease.

As Nathanielsz puts it, "How we are ushered into life determines how we leave."

The director of the Cornell Laboratory for Pregnancy and Newborn Research, Nathanielsz presents the evidence for fetal programming in an anecdotal format aimed at the non-medical reader with a curiosity about the biology of pregnancy, as well as concern for the pain and expense of degenerative diseases that afflict Western society. The book follows his 1991 volume, Life Before Birth, which was translated into nine languages. Even as he was writing the earlier book (and suggesting a T-shirt for every pregnant woman with the legend, "Baby on Board -- Don't Abuse") scientific agreement was forming about the long-term effects of fetal deprivation.

Evidence comes from worldwide epidemiological and clinical studies, as well as animal studies at the Nathanielsz laboratory and elsewhere. He acknowledges David Barker at England's Southampton University as the pioneer in fetal programming studies. It was Barker's original epidemiological study, for example, that found the likelihood of dying of heart disease to be 50 percent greater in men whose birth weight was less than 5.5 pounds, compared with men who were 9.5-pound babies.

Other studies cited in Life in the Womb explain why diabetes and obesity are more likely to be the ironic fate for adults who had low birth weights or were very thin at birth. "Babies who prepare in the womb for a thrifty existence pay the price after birth if they live a life of over consumption in a situation in which food is plentiful," Nathanielsz says. "Prenatal adjustments that help the fetus cope with austerity before birth may be an incorrect and even fatal preparation for the food-laden riches of modern civilization after birth."

Women who neglect their own nutritional needs or who use tobacco, alcohol or drugs during pregnancy deserve some -- but not all -- of the blame, Nathanielsz believes. He also calls on family members (especially those whose second-hand smoke can affect the unborn) and society in general to improve prenatal conditions.

The doctor, who was trained in obstetrics before turning to research, doubts that the new findings about prenatal programming will dump additional liability on the medical profession. But he worries for the mothers. In his book he imagines an ambulance-chasing lawyer's television commercial that begins: "Do you have high blood pressure? Are you overweight even though you are only thirty? It may be that your mother worked too hard while she was pregnant. Current medical research clearly shows that as a result of your mother's lack of good nutrition and rest, you are now programmed to have life-threatening high blood pressure, and you will probably suffer from heart disease."

If lawyers do read the book, Nathanielsz hopes they will heed his counsel: "The answer to problems that follow from poor prenatal conditions lie with the family and society. Both have responsibilities," he writes. "It is preferable to consider the issue of long-term implications of inadequate preparation for life-long good health as society's problem and not just that of the individual."