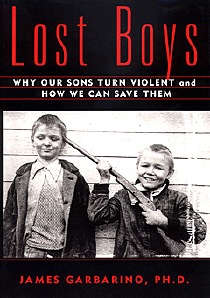 Neglect, shame, spiritual emptiness, alienation, anger and access to guns are a few of the elements common to violent boys, says James Garbarino, professor of human development at Cornell University, in his new book, Lost Boys: Why Our Sons Turn Violent and How We Can Save Them.

"There is an epidemic of youth violence, and no community is immune," says Garbarino, the co-director of the Family Life Development Center at Cornell and the author of 15 other books. "The boys who commit these acts are our sons, and if we look carefully, deeply and without prejudice, we can identify their risk factors."

These risks, he writes, can be found "in alienation from positive role models, in a spiritual emptiness that spawns despair, in adolescent melodrama, in humiliation and shame, in the video culture of violent fantasy that seduces many of the emotionally vulnerable, and in the gun culture that arms our society's troubled boys."

Garbarino suggests that the problem of violence, and its effect on young people, is one shared by American society at large. He writes: "Perhaps it is time for us as a people to 'put up or shut up' about violence. Are we willing to accept tragedies like those in Jonesboro, Paducah and Springfield as part of the cost of being an American, or are we willing to pay the price for a less violent society by depriving ourselves of violent imagery on television and in the movies, at least so far as children are concerned."

But, he stresses, "we are not powerless. We can do more than simply watch." He proposes specific anti-violence actions such as providing children with a sense of purpose, spiritual anchors, strategies for developing resilience in the face of trauma and community supports that can foster social health. He also discusses in detail the challenging task of rehabilitating violent teen-agers when prevention has failed.

Garbarino's book, recently published by The Free Press, an imprint of Simon & Schuster (New York, $25), draws on extended interviews with incarcerated teen murderers and tries to make sense of their words through the lens of the latest child development research. Using his 25 years of experience studying violence and its impact on children and youth in the United States and around the world, Garbarino shows how, to vulnerable boys, violence becomes normal, or even "the right thing to do," and how, to these boys, violence makes moral sense, is necessary for survival and is sometimes a "simple entitlement."

Youth violence, explains Garbarino, "is often a boy's attempt to achieve justice as he perceives it." The warning signs, he says, are: A lack of connection, masking of emotions, withdrawal, silence, rage, trouble with friends, hypervigilance and cruelty toward other children and even animals.

He writes: "Programs that work anchor boys in empathy and socially engaged moral thinking by organizing the daily life experiences of these boys around opportunities to learn positive lessons about how to a be a man. A strong man does not succumb to the cultural stereotypes of a socially toxic society that defines manhood in terms of aggression, power and material acquisition. Rather, it offers hope to the lost boys and to the society as a whole."