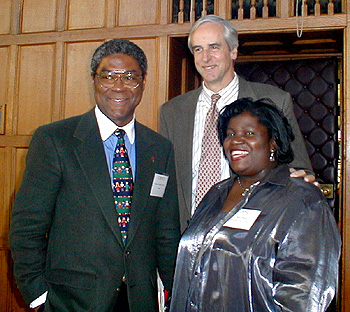 The fifth annual James A. Perkins Prize for Interracial Understanding and Harmony at Cornell University was awarded to the campus Multicultural Living Learning Unit (McLLU) at a ceremony April 7 in Willard Straight Hall.

Two other applicants for the $5,000 prize, established in 1994 by Trustee Thomas W. Jones, won honorable mentions. One went to a course titled "Race, Power, and Privilege in the United States," taught jointly by Donald J. Barr, professor of policy analysis and management in the College of Human Ecology, and James E. Turner, professor in the Africana Studies and Research Center, College of Arts and Sciences. The other honorable mention was awarded to the Noyes Council's Cultural Night Series, at the Noyes Community Center, and was accepted by the program's coordinator, Thomas Dunne.

Jones, a 1969 Cornell graduate, established the Perkins Prize to promote efforts for the advancement of campus interracial understanding and harmony and to honor the "historic decision" by Cornell President Emeritus James A. Perkins (1963-1969) to increase the enrollment of minority students during the unsettled 1960s. Jones, the co-chair and CEO of Citigroup's SSB Citi Asset Management Group, one of the largest asset management firms in the world, was a Cornell undergraduate and participant in the student takeover of Willard Straight Hall in 1969.

"I am very pleased that the number of prize applicants and award ceremony participants have been increasing every year," Jones said. He noted that this year's ceremony was the first since the death of Perkins, who died last August. He spoke of his deep respect for Perkins, calling him a "wise" and "courageous" man whose "moral conviction was that Cornell should provide the leadership" to promote racial understanding and diversity on the nation's campuses and to bring African-Americans "into the vineyard of elite higher education institutions." He did that with both financial support and academic programming, Jones added.

Before making the award presentation, President Hunter Rawlings called "the relationship forged between Tom Jones and President Perkins one of the most moving stories in Cornell history.I find it inspiring that, after the events of 1969, you could emerge as allies with the common goal of advancing interracial understanding and harmony."

He said the Perkins Prize "underscores the university's goal of respecting diversity while finding commonality, and it is an important demonstration of the university's commitment to fostering a sense of community -- on campus, locally and globally."

Rawlings presented the 1999 Perkins Prize to McLLU, saying, "The Multicultural Living Learning Unit's primary role and responsibility is to promote respect, understanding and amicable relations among students of different races, ethnic backgrounds and cultures within the McLLU, which has more than 80 residential and non-residential members, as well as within the Cornell community at large." He noted that during the past year the McLLU was involved in five initiatives — which collectively reached more than 1,000 students — designed to foster a campus climate sensitive to racial differences.

Paulett McIntosh, McLLU residence hall director for the past four years, accepted the award for the McLLU, along with students Jeanette Williams, a senior and McLLU resident adviser, and Christopher Roberson, a junior who is a McLLU program assistant.

McIntosh thanked the residents and staff of the McLLU for their help and reaffirmed her commitment to the Cornell community. "You are the reason I do the things I do," she said. "I see my work and effort as just a part of an eclectic effort of students and faculty and staff across campus who are just as committed as I am."