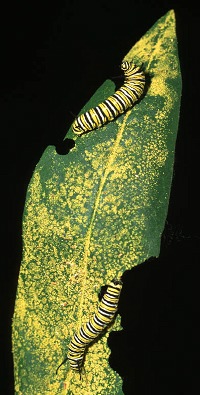 An increasingly popular commercial corn, genetically engineered to produce a bacterial toxin to protect against corn pests, has an unwanted side effect: Its pollen kills monarch butterfly larvae in laboratory tests, according to a report by Cornell University researchers.

Writing in the latest issue (May 20) of the journal Nature, the Cornell researchers note that this hybrid crop, known as Bt-corn, has genes from the bacterium Bacillus thuringiensis (Bt) spliced into the plant genes. These hybrids are very effective against the ravenous European corn borer, a major corn pest that is destroyed by the plant's toxic tissue. The engineered corn is safe for human consumption.

Unlike many pesticides, the Bt-corn has been shown to have no effect on many "nontarget" organisms -- pollinators such as honeybees or beneficial predators of pests like ladybugs. But the Bt-modified corn produces pollen containing crystalline endotoxin from the bacterium genes. When this corn pollen is dispersed by the wind, it lands on other plants, including milkweed, the exclusive food of monarch caterpillars and commonly found around cornfields.

Says John E. Losey, Cornell assistant professor of entomology and the primary investigator on the study: "We need to look at the big picture here. Pollen from Bt-corn could represent a serious risk to populations of monarchs and other butterflies, but we can't predict how serious the risk is until we have a lot more data. And we can't forget that Bt-corn and other transgenic crops have a huge potential for reducing pesticide use and increasing yields. This study is just the first step, we need to do more research and then objectively weigh the risks versus the benefits of this new technology."

Like all grasses, corn is wind-pollinated, and the pollen can be blown more than 60 yards from the edge of cornfields. "Pollen is that yellow dusting your car gets on spring and summer days; pollen is everywhere," explains Losey. "That's why we are concerned about this problem."

Other researchers on the study were Linda S. Rayor, Cornell instructor in entomology, and Maureen E. Carter, Cornell research aide.

"Monarchs are considered to be a flagship species for conservation. This is a warning bell," says Rayor. "Monarchs themselves are not an endangered species right now, but as their habitat is disrupted or destroyed, their migratory phenomena is becoming endangered."

In the laboratory tests, monarchs fed milkweed leaves dusted with so-called transformed pollen from a Bt-corn hybrid ate less, grew more slowly and suffered a higher mortality rate, the researchers report. Nearly half of these larvae died, while all of the monarch caterpillars fed leaves dusted with nontransformed corn pollen or fed leaves without corn pollen survived the study.

The toxin in the transformed pollen, the researchers say, goes into the gut of the caterpillar, where it binds to specific sites. When the toxin binds, the gut wall changes from a protective layer to an open sieve so that pathogens usually kept within the gut and excreted are released into the insect's body. As a result, the caterpillar quickly sickens and dies.

Bt-engineered corn is among the first major commercial successes for agricultural biotechnology. Last year, more than 7 million acres of the hybrid crop were planted by U.S. farmers primarily to control the European corn borer. Before the advent of Bt-corn, this pest was extremely difficult to control because it bores into the stalk, where it is protected from pesticides. It produces several generations a year. Because it was so difficult to control effectively with pesticides, annual losses averaged $1.2 billion. In contrast,Bt-corn provides essentially total season-long control at a reasonable cost without the use of pesticides. At least 18 different Bt-engineered crops have been approved for field testing in the United States. As of last year, transformed corn, potatoes and cotton had been approved by the U.S. Department of Agriculture for commercial use.

Several factors make monarch caterpillars particularly likely to make contact with corn pollen, Losey says. Monarch larvae feed exclusively on milkweed because it provides protection against predators. The plant contains cardenolides, which are toxic, bitter chemicals that the monarch caterpillar incorporates into its body tissues, rendering it unpalatable to predators. Milkweed grows best in "disturbed" habitats, like the edges of cornfields, Losey notes.

The butterflies overwinter in Mexico and by the spring begin migrating north. The first generation of the year crosses into Texas, other Gulf Coast states and Florida, seeking milkweed on which to lay their eggs and feed. By late May or early June, the second generation of adults has emerged and heads north to areas including the Midwest Corn Belt. Monarch caterpillars are feeding on milkweed during the period when corn is shedding pollen, Losey says. Thus "they may be in the right place at the right time to be exposed to Bt-corn pollen."