An enduring nuptial gift is included in every sperm package from a male rattlebox moth (Utetheisa ornatrix)to his freshly mated female: a potent, plant-derived chemical that protects her for life against predatory spiders, biologists at Cornell University have discovered. 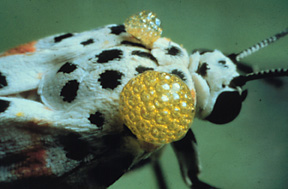 Thomas Eisner/Cornell University
Pyrrolizidine alkaloids from plants are extruded as a froth when the rattlebox moth is disturbed.

The first (but almost certainly, not the only) example of a sexually transmitted chemical defense to benefit a female animal is reported in the current (May 11, 1999) Proceedings of the National Academy of Sciences by Cornell biologists Andrés González, Carmen Rossini, Maria Eisner and Thomas Eisner. The protective chemical, pyrrolizidine alkaloids (PAs) that the adult male obtains by eating rattlebox plants (Crotalaria mucronata) while in the larval stage, reaches every part of the female's body within minutes after mating, the biologists say. It also protects her eggs.

"Only a human bridegroom would buy life insurance for his bride. This classy moth gives a gift she can really use -- a life assurance policy, if you will -- that keeps paying off every time her life is in danger," says Thomas Eisner, the Schurman Professor of Chemical Ecology at Cornell. During courtship, Eisner adds, the female rattlebox moth has a way of sensing which suitor offers the best chemical defense, and she chooses accordingly.

Native to central Florida, U. ornatrix earned another common name, the ornate moth, for its distinctive coloration, an intricate pattern of flamingo pink, black and white that adorns the inch-long adults. "They are one of the few moths to fly during daylight," Rossini says. "They literally flaunt their brilliant colors, as if to say: 'You should know from my pattern that I am distasteful.' "

Spiders that don't know the color code are quick to find out that the moth is inedible. One taste of the chemical-laden moth is enough to make a spider cut loose its erstwhile prey from the web, and the moth escapes unharmed. The Cornell biologists repeatedly tested moths on wolf spiders and orb-weaving spiders. 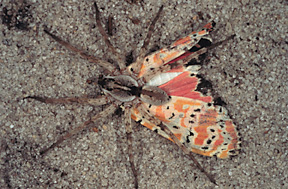 Every moth with PAs survived its close encounter with the spiders, while moths without the defensive chemical in their bodies were killed or eaten. That is because they were raised on a laboratory diet of pinto beans, which do not have PAs, or because the females mated with males that could not offer the nuptial gift of PAs.

Until the Cornell study, only Utetheisa's eggs were known to benefit from a male's nuptial gift. The grisly experiment with spiders was performed to prove that the female profits, as well.

"It didn't seem right that the female could not benefit from the male's alkaloidal gift," González says, detailing the contents of the spermatophore, as the insect sperm package is known. (See "Ornatrix Tricks" fact sheet, attached.) Weighing more than 10 percent of the male moth's body mass, the spermatophore contains enough sperm to fertilize hundreds of U. ornatrix eggs, nutrients to help the female produce numerous healthy eggs and PAs, now known to protect the female as well as her eggs, González says. "It makes sense that the male should contribute to the female's defense. She is, after all, the recipient of the sperm."

"Of course the defensive alkaloids also protect the male," Rossini says, "and they have a secondary benefit for him during courtship. A chemical derivative of PA is released into the air from two brushes on the male's abdomen during the courtship dance, as a way of telling the female how much alkaloid he can offer.' To initiate the courtship dance and attract males from a distance, the female releases her own sex pheromone, which is not related to PAs, Rossini notes.

"With this finding, we have added one more item to that very short list, 'What Are Males Good For?' " Thomas Eisner quips. "They evidently donate more than sperm."

He credits his wife, Maria Eisner, a research associate in the Section of Neurobiology and Behavior at Cornell, with carrying out the outdoor moth-spider tests. Also a wife-and-husband team, Rossini and González are graduate students in that department. The study appears in the National Academy of Sciences (NAS) journal as Sexually Transmitted Chemical Defense in a Moth (Utetheisa ornatrix)." It was supported in part by a National Institutes of Health grant and by Johnson & Johnson Fellowships in Chemical Ecology to Rossini and González. 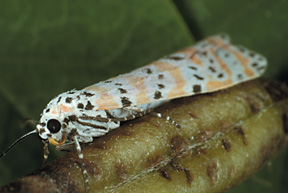 Photo by Thomas Eisner/Cornell University
Also known as the 'ornate moth' for its color pattern and as the 'rattlebox moth' for its favorite food plant, the adult Utetheisa ornatrix is about one inch long.

Not a pest: As a chemically laden insect most predators can't eat, it's a good thing Utetheisa ornatrix is not an agricultural nuisance. The rattlebox moth, also known as the ornate moth for its elaborate pink-white-black color scheme, dines exclusively on leaves of the rattlebox plant, Crotalaria mucronata, (so named because beans in the dried pods make good rattles) and a related legume, C. spectabilis, that was introduced to Florida as a possible source of cattle fodder. But C. spectabilis turned out to contain nearly as much pyrrolizidine alkaloids (PAs) as the rattlebox and cattle wouldn't eat it. Both plant varieties are regarded as weeds and are in no danger of extinction from munching moth larvae. 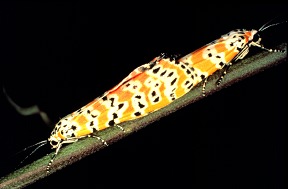 Not a record: Once rattlebox moths start to mate, they remain coupled for eight or nine hours. That's not a Guinness record, however. Some insects mate for two days at a time. Mosquitoes, on the other hand -- or the other arm -- require only a few seconds.

Where's the froth? Immediately after mating with a male rattlebox moth, his gift of PAs chemical is on its way to every part of the female's body -- the thorax, the abdomen, even the wings. To be warned that this toxic temptation is not safe to eat, a spider must first taste the moth. Sniffing is not enough, because the moth's defensive chemical is not very volatile -- a useful quality in interests of chemical conservation. However the chemical does appear in another form, as a frothy blend of PAs and air bubbles created by special ducts in the moth's thorax and extruded to the outside when the insect is disturbed. 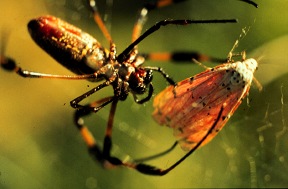 Photo by Thomas Eisner/Cornell University
The orb-weaving spider, Nephila clavipes, inspecting an Utetheisa. This particular Utetheisa contained an alkaloid, and moments later was set free by the spider. In liberating the moth, the spider uses fangs and palps in combination to sever each of the threads that are entangling the moth.

So little time, so many mates: Just one mating with a male bearing PAs will protect a female rattlebox moth for the rest of her adult life, about 30 days. Females are known to mate with upwards of 20 different males in one lifetime. That's about one every second night.

Lady of the rings: Biologists can tell how many times a female moth has mated by counting the tiny, hardened rings that are left behind when the male's spermatophores (or sperm packages) dissolve. After dissecting moths that have died naturally, the biologists say the doughnut-like rings accumulate in the sperm pouch and resemble a miniature coiled spring -- a kind of keepsake necklace from all the males she has known.