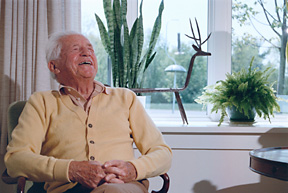 Robert Barker/University Photography
Professor Emeritus M.H. Abrams is author of the acclaimed The Mirror and the Lamp: Romantic Theory and the Critical Tradition and editor of the Norton Anthology of English Literature, which he conceived.

Anyone whose book has been selected as one of the best of the 20th century could be forgiven for putting on a few airs. After all, such an honor is a sign of permanence as well as excellence.

But having his acclaimed book of literary criticism, The Mirror and the Lamp: Romantic Theory and the Critical Tradition, ranked as No. 25 in the Modern Library's list of the 100 best nonfiction books written in English during the past 100 years doesn't seem to have fazed M.H. (Mike) Abrams at all. He thoughtfully waits outside his new home to meet a reporter, lest she get lost in the rambles of Ithaca's Kendal community. And he's even developed a self-effacing sound bite for the honor: "Shucks, it's only a century. Now, if it had been a millennium!"

This response would not surprise Abrams' colleagues at Cornell. While the Class of 1916 Professor of English Literature Emeritus is among the most highly regarded literary scholars of our time, he is appreciated among Arts faculty here for being a modest and wise man, as well.

"[Mike's] constant presence in the halls of Goldwin Smith reminds us all that scholarship is a labor of love, not a 9-to-5 job," said Jonathan Culler, chair of the Department of English. "During the culture wars and arguments about the literary canon, he has promoted here at home an open-mindedness and mutual respect that has often been lacking elsewhere."

Abrams' legacy to Cornell is deep and abiding. He was a founder of the A.D. White Center for the Humanities, which brings scholars from around the world to campus. He has been a staunch supporter of the University Library, chairing membership drives and establishing an endowment that resulted in the recent acquisition of a unique set of volumes of William Wordsworth's Poetical Works (1827), with copious emendations by the poet which have been unknown to scholars before now.

Abrams' literary legacy is vast, as well. Among his accomplishments and honors are these:

Now 86 years old, Abrams isn't about to rest on his impressive laurels. He's spent much of the last two years revising the seventh editions of his Norton Anthology and his Glossary of Literary Terms. He's published an essay in a new book by the University of Massachusetts Press, The Persistence of Poetry: Bicentennial Essays on Keats. He's preparing to present the Harder Lecture, sponsored by the English department and Cornell Plantations, in the fall (tentatively titled, "This Green World," quoted from Wordsworth). And he wants to learn how to use a computer.

In a recent interview, Abrams displayed interests that range from the early Romantic poets to rap.

Whom does he read? "John Updike is always fun. And one of my former students, Tom Pynchon. I like to read [Cornell professor and poet] Archie Ammons, my great friend. And Harold Bloom, another former student."

Abrams was disappointed that several books he most highly regards were not on the Modern Library list.

"When I was a graduate student, the leading spirits at Harvard were interested in the history of ideas," he said. "Three books were almost student bibles: Science in the Modern World by Alfred North Whitehead, who taught at Harvard while I was a student there. [He is on the list at No. 23 for Principia Mathematica with Bertrand Russell.] The other two of the trilogy were E.A. Burtt's The Metaphysical Foundations of Modern Science, which I think is a classic. He was a philosopher at Cornell who did splendid work. The other book is by the great Cornell historian Carl Becker, The Heavenly City of the Eighteenth Century Philosophers. Becker's paradoxical undertaking was to show that the theories of the major philosophers of the 18th century secular enlightenment were biblical and theological in spite of themselves. He opened up a way of thinking which, looking back, I find had a great influence on me."

Despite his literary specialization, Abrams worked as a scientist in classified research during World War II.

"The Psycho-Acoustic Laboratory was a supposedly secret lab in the basement of Memorial Hall at Harvard," he said.

His wife of 62 years, Ruth Claire Gaynes, also was employed there as a civilian. "We worked on solving the problem of voice communications in a noisy military environment. We developed tests for communications equipment, established military codes that are highly audible and invented selection tests for personnel who had a superior ability to recognize sound in a noisy background caused by engines and gunfire."

What qualified him for that job? His interest in psychology and the phonetics and philology courses he took to satisfy the old-fashioned requirements for a doctorate in English literature, he said.

Right after the war, Abrams was offered a job at Cornell. He was "charmed" by his first sight of the campus and Ithaca. Ruth, he jokes, being from New York City, "thought Ithaca was the end of the world." But, she learned to love it, too.

Moving from war science back to literature was "quite a shock." Abrams had begun working on The Mirror and the Lamp in Cambridge in the mid-'30s and went back to it. "The book didn't appear until 1953," he said. "Most of it was rewritten half a dozen times. Hard work makes easy reading or, at least, easier reading."

"I've always been surprised at the degree of success of The Mirror and the Lamp and the range and duration of esteem for it," Abrams commented. "I had no reason to expect in 1953 that it would appeal to more than a specialized group interested in literary criticism. I think one of the reasons why it's been of interest to a broad spectrum of readers is because one of its emphases was on the role of metaphors in steering human thinking. It was a very early book to insist on the role of metaphors in cognition, as well as in imaginative literature -- to claim that key metaphors help determine what and how we perceive and how we think about our perceptions."

Abrams confessed that, to his mind, his book Natural Supernaturalism is "more important" than his more acclaimed work. One of its chief emphases, he explained, is the profound influence of biblical and theological literature on secular thinking, literature and the writing of history. "Natural Supernaturalism is quite well known and even used as a textbook," he said, "but it never seems to have attracted the acclaim of its predecessor."

What accounts for its relative lack of esteem? "The title, Natural Supernaturalism, is harder to pronounce than The Mirror and the Lamp, which is a title quoted from William Butler Yeats," he said, smiling. "People get the title wrong in all sorts of ways. It's rare to find someone getting it right."

Abrams also was surprised by the success of the Norton Anthology. He was approached by the president of W.W. Norton to edit a volume to be used in survey courses in literature, modeled on a course he taught at Cornell.

"We expected to sell some thousands of copies," he said. "What happened was inconceivable. It took off and sold all over the world. We tried to represent the greatest of English literary works in two volumes. And over the years, the bigger it's gotten, the better it's sold."

Abrams is working on a new project in an area he thinks has been largely neglected, which he calls "The Fourth Dimension of a Poem." It's the focus of his essay in The Persistence of Poetry, and it harks back to his wartime research in Harvard's Psycho-Acoustic Lab.

The dimensions of poetry are the look of print on the page, the sound of the words, the meaning of the words and -- the fourth -- the physical act of articulating the words, he explained. In his essay, he writes, "... when we read a poem slowly and with close attention, even if we read it silently to ourselves, the act involves -- often below the level of distinct awareness -- the feel of enunciating the words of the poem by remembered, imagined, or incipient movements and tactile sensations in the organs of speech, that is, in the lungs, throat, mouth, tongue and lips." This feature "is essential to the full experience of a poem," he adds, and "has been neglected in literary criticism.

"If you lose that dimension of poetry, if you read quickly to get through a poem to what it means, you have missed the body of the poem," he said. The fourth dimension is vibrantly displayed in the way Robert Pinsky articulates his poems or in the speeches of the great black orators like Martin Luther King Jr. and even in rap music, Abrams noted. "Rap is far from an abstract, dematerialized mode of utterance. I hate a lot of rap because it's bad stuff, but it does emphasize the articulatory aspect of the words."

Abrams describes reading Keats' poetry aloud as "a richly sensuous oral activity" which feels "like honey on the tongue." Amidst the noise of 21st century infotainment media, a Romantic poet like Keats may be as hard to hear as a man trying to shout words into a radio over the noise of tanks and bombs.

On deconstruction theory: "When something startlingly new comes up, people -- young people, especially -- seize it. You can't complain about that. I think its heyday has passed, but it's had an effect and will continue to have an effect."

On predicting trends in literary theory: "If you learn one thing from having lived through decades of changing views, it is that all predictions are necessarily false."

On literature: "We are human, and nothing is more interesting to us than humanity. The appeal of literature is that it is so thoroughly a human thing -- by, for and about human beings. If you lose that focus, you obviate the source of the power and permanence of literature."

On Robert Frost: "He always violated your expectations. ... He was a character."

On his student Harold Bloom: "Indisputably a genius and one of the great flamboyant characters of our era."

On Shakespeare: "It's amazing how, age after age, in country after country, and in all languages, Shakespeare emerges as incomparable."

On the movie "Shakespeare in Love": "Fun. Good Stoppard. But I didn't recognize Shakespeare. They made him out to be a kind of 19th century esthete."

On the "death of literature": "You always hear about it, but it's always grossly exaggerated. The survival of artistic modes in which we recognize ourselves, identify ourselves and place ourselves will survive as long as humanity survives."