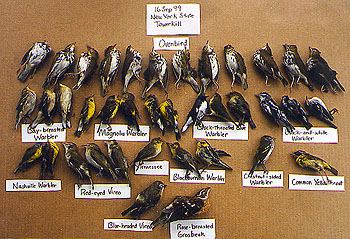 Photo courtesy of New York State Towerkill Survey.
FLOYD + TOWER = R.I.P. These birds, labeled by species, were found at the base of an 850-foot television tower near Elmira, NY in the wake of Hurricane Floyd. Ornithologists say communications towers pose the greatest hazard to migrating birds during periods of poor visibility.

If Alfred Hitchcock made disaster films, "Birds vs. Towers" might go something like this: It was a dark and stormy night during fall migration season. Lacking visual cues, the flock homed on the one source of hazy brightness in the sky. Apparently mistaking lights of the communications tower for the moon, some birds smashed head-on into the steel structure. The rest circled the tower like a confused tornado, eventually hitting one of the tower's supporting guy wires, colliding with other disoriented birds or falling to the ground in exhaustion.

Bird scientists gathering at Cornell University last month for the annual American Ornithologists' Union (AOU) meeting looked ahead to fall migration time with renewed dread. Although birds have been hitting structures in North America for at least 100 years, there are now more tall towers than ever before — especially for cellular phone and digital television transmission — with even more on the drawing boards.

"The more towers, the more dead birds," said Bill Evans, a consulting ornithologist for the Cornell Laboratory of Ornithology who helped organize the first scientific session of its kind, "Avian Mortality at Communications Towers."

"Many of these species face degraded habitats at both ends of their migration flights and the thousands of towers are a new threat along the way," said Evans, citing estimates of bird collisions with manmade objects at 4 million per year.

Flying will become even more hazardous in the next decade, predicted Albert M. Manville, a biologist from the U.S. Fish and Wildlife Service (FWS) Office of Migratory Bird Management in Arlington, Va. He said that television stations converting to the digital format in the United States plan to erect more than 1,000 "megatowers," each at least 1,000 feet tall.

The FWS biologist said that friends of birds can expect more catastrophes such as the Jan. 22, 1998, incident when an estimated 10,000 Lapland longspurs died one foggy, snowy night in western Kansas. The television tower that killed the neotropical migrants was "only" 420 feet high.

The Cornell meeting brought together, for the first time, biologists from government and academia, environmentalists, representatives of the Federal Communications Commission (FCC), National Association of Broadcasters and the wireless communications industry. Participants in the meeting, which was cosponsored by FWS, the American Bird Conservancy and the Ornithological Council, reached no consensus but they heard plenty of alarming facts:

Noting other estimates as high as 100 million birds killed each year in collisions of all kinds, Cornell's Evans said no one really knows. Towers in remote locations are rarely monitored, and those that are may not reflect the full extent of avian mortality because predators often consume the birds before biologists arrive. (At one tower, biologists found a flea collar, apparently shed by a pet cat taking advantage of the avian carnage.)

"But I know this is happening because I've heard it," said Evans, who has eavesdropped on migrating birds for 15 years with upward-pointing microphones and twice set up equipment at the base of a 317-foot communications tower in north-central Nebraska. Several duck species, including blue-winged teals, were migrating when an obstacle suddenly loomed in the dark.

"I could hear their alarm calls, the collisions," Evans said, "the sounds of ducks falling to the ground."

Hitchcock, who was said to prefer birds over people, would have been appalled.