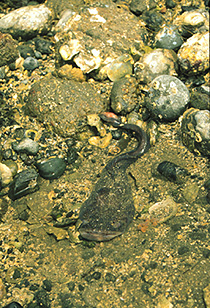 Margaret Marchaterre/Cornell University
A type I male plainfin midshipman fish in his shallow-water nest. Type I males sing a droning song to attract females to their nest where eggs will be laid under rocks. Whether the eggs are fertilized by type I males or by type II "sneaker" males that also respond to the courtship song, the females depart immediately and let type I males raise their young.

Cornell University biologists have shown how chemicals produced in a core region of the brain shared by all vertebrate animals (including humans) make males act like males, females like females -- and some males something like females.

James Goodson and Andrew Bass, who studied a fish species that produces two types of males for their report in the Feb. 17, 2000, issue of the journal Nature, say that brain processes responsible for social behavior typical of females, for example, aren't necessarily linked to the female's sex at all.

"This is a clear demonstration of how the action of neurochemicals can modulate the electrical or neurophysiological output of the brain as it establishes a social behavior," said Bass, professor of neurobiology and behavior, in an interview.

"We have also shown that there can be a neurochemical dissociation -- an uncoupling -- between an animal's gonadal sex and the regulation of behaviors typical of a sex," said Goodson, a postdoctoral fellow in Bass' neurobiology laboratory.

The part of the brain studied by Goodson and Bass is the preoptic area-anterior hypothalamus, a section of the basal forebrain, which neurobiologists say has been "conserved" throughout the evolution of vertebrates. The functions and structure of this conserved brain region are strikingly similar in fish, amphibians, reptiles, birds and mammals, including humans. The neurochemicals credited with sex-related social behaviors are isotocin and vasotocin in fish and are essentially the equivalents of oxytocin and vasopressin, respectively, in mammals.

The fish that made the neurochemical finding possible is the plainfin midshipman (Porichthys notatus), best known for its singing in shallow salt water at mating time. Most of the noise comes from male midshipman fish of the type I variety, which vocalize for hours under rocks to attract females. When type I males' courtship songs are successful, females briefly visit the nests to deposit eggs, then leave the type I males to fertilize the eggs and raise the young.

Sometimes, however, the type I males' songs have an unintended effect, attracting a different kind of male of the same species. Called type II or "sneaker" males, the visitors are distinguished by three things: Their inability to sing like a type I male (although type II males can grunt, as can females, which is explained in the attached fact sheet); their smaller body size but enlarged reproductive organs; and the type II males' habit of sneakily fertilizing eggs left for the type I males. 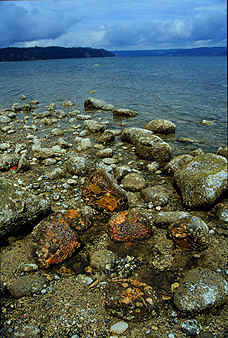 Margaret Marchaterre/Cornell University
Rocks in a shallow-water nest of a type I male plainfin midshipman fish were temporarily overturned by biologists to show the location of eggs deposited by females that visited the nest. When rocks are returned to their original position, the eggs hatch -- upside down -- and young midshipman fish are reared by the keeper of the nest, the type I male.

Also attracted to all the singing, grunting and sexual shenanigans are opportunistic biologists, eager to analyze an animal system with a third, intermediate gender -- the type II males -- and with behaviors that are linked to gender. Watching this salt opera, the Cornell biologists wondered: Are the gender-typical actions dictated by the animal's sex, as embodied in the gonads? Or can a brain process alone initiate gender-typical behavior?

Working in the laboratory with anesthetized type I males, type II males and female midshipman fish, the Cornell biologists first applied gentle electrical stimulation to nerve cells in the basal forebrain. That caused type I males to produce versions of their courtship songs and grunts, females to make their characteristic grunts and type II males to make the same, female-like grunts -- all in "fictive" form. (Fictive vocalizations are electrical impulses that are recorded from nerves controlling the fish's vocal muscles, much like the nerves that control vocal muscles of the human larynx. The fictive vocalizations are displayed on a computer and heard through a speaker; despite their electronic format, the recordings sound virtually identical to the natural sounds of free-swimming males and females.)

However, females and the different types of male midshipman fish didn't all respond the same. The courting males (type I) were sensitive to vasotocin but not isotocin, and in females, this pattern was reversed. The sneaker males (type II), whose vocal behavior is more like females, exhibited responses to the chemicals that were almost identical to females, rather than other males.

Illustration by Margaret Nelson/Cornell University
THE VOCAL ORGAN of the midshipman fish is a pair of sound-producing, sonic muscles attached to the walls of their swimbladder. Contraction of thesemuscles, which are similar to the vocal muscles of other vertebrate animal,s including birds and mammals, makes the swim bladder act somewhat like a drum, which leads to sound production in the midshipma''s aquatic environment. As shown in the top panel, one type of sound that nesting males produce when defending their nest against potential intruders is known as a grunt train which is simply a series of short duration vocalizations known as grunts. As highlighted in the bottom panel, the vocal organ of midshipman, like that of humans, is controlled by a vocal motor pathway in the brain. A chain of neurons beginning in a region of the basal forebrain known asthe preoptic area-anterior hypothalamus (POA-AH) excites a vocal pattern generator in the most caudal regions of the brain that is directly connected to the sonic muscles by an occipital nerve. Weak electrical stimulation of the POA-AH produces a series of gruntlike responses that mimic a natural grunt train and can be easily detected by recording the electrical activity of the occipital nerve. James Goodson and Andrew Bass of Cornell University have now shown that neurochemicals (arginine vasotocin, AVT, or isotocin, IT) produced by neurons in the POA-AH can modify the output of the pattern generator. Moreover, the production of gender-typical vocal behaviors is not necessarily limited by an animal's gonadal sex, even though sexual behavior and the gonads are regulated by the same brain region.

The Cornell biologists have shown, for the first time in any animal species, that the neurochemical regulation of gender-typical behavior by the basal forebrain is not necessarily limited by an animal's gonadal sex, even though sexual behavior and the gonads also are regulated by this brain region. Writing in Nature, they offer "strong evidence that gonadal sex and social/reproductive tactics may be uncoupled from each other and regulated independently within the same brain region."

Goodson adds, "Apparently, the process of evolution has modified reproductive and social behavior independent of the gonads. This blending of characteristics should make more variation available for natural selection to act upon and may help explain the extraordinary range of social behaviors that we see across all of the vertebrate groups, from sex role reversal to dynamic diversity in the sex differences found for parental care and aggressive competition."

The study was supported, in part, by grants from the National Science Foundation. Logistical support was provided by the University of California Bodega Marine Laboratory.

Salt Opera Fish Facts: It's not over when the single father sings