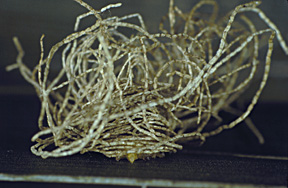 Photo by Thomas Eisner/Cornell University
Hidden inside a thatch of its own feces, the larval tortoise beetle (Hemisphaerota cyanea ) is safe from almost all predators. But research at Cornell University found one predator, the carabid beetle (Calldida viridipennis), capable of penetrating the fecal defense shield.

Like eccentric street people who deter muggers by acting crazily, one crafty beetle has developed an equally outrageous defense: Larvae of the tortoise beetle species Hemisphaerota cyanea cover themselves with their own feces, persuading most predators to pass them by, Cornell University biologists have discovered.

But at least one kind of one predator is not repulsed by beetle feces, Thomas Eisner and Maria Eisner report in the March 14 issue of Proceedings of the National Academy of Sciences (Vol. 97, pp. 2632-2646). The reason for the breakdown in a nearly perfect defense remains a mystery.

"You could call this the ultimate in recycling," says Thomas Eisner, Cornell's Jacob Gould Schurman Professor of Chemical Ecology, describing the golden strands of feces extruded from the beetle's hindgut and fashioned into a thatched shield for its otherwise vulnerable body. "Instead of leaving excrement lying around, as most larvae do, this species has developed an overhead sewer system. The thatch grows as the larvae metamorphoses, and for some reason that we don't understand, the fecal shield deters most predators that would gladly eat the naked larva. They won't even try. Maybe they're disgusted by the whole idea."

Then along comes a carabid beetle (Calleida viridipennis), quickly disassembling the thatch shields and feeding on the hapless inhabitants.

The adult H. cyanea is a familiar sight on palmetto fronds of Archbold Biological Station, in the dry scrubland of central Florida where the professor and his wife, a senior research associate in Cornell's Department of Neurobiology and Behavior, conduct research. Called a tortoise beetle because of its turtle-like shape, the iridescent blue adult insect chews trenches through palmetto leaves as it feeds.

Until the Eisners looked closer, however, most casual observers figured the small, golden bits of stuff on palmetto fronds were lifeless. The spots seemed never to move, and they did not resemble any insect larva known to science. 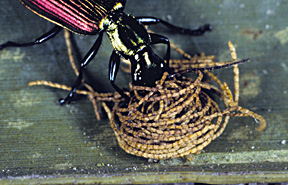 If some fecal strands are damaged or lost - as happened when the biologists experimentally removed some - the insect detects their absence and repairs the shield with new strands. Only when a larva is about to pupate into adulthood does the thatch-building stop.

Eager to learn the function of the thatch, the biologists devised a taste test for two kinds of potential predators, coccinellid beetle larvae and pentatomid bugs, which are commonly called stink bugs. H. cyanea larvae with their thatch shields intact were uniformly ignored. "They did not attempt to bite the thatch, or to force themselves into it," the biologists reported.

Larvae denuded of their thatch were eaten without hesitation. The biologists report that one stink bug they watched "located first one denuded larva then the other, and ate each by impaling it on the proboscis and sucking it dry." The Cornell biologists had determined the function of the fecal thatch - defense against predators - but also noted that the covering might protect the larvae from desiccation by retaining moisture and blocking the sun. 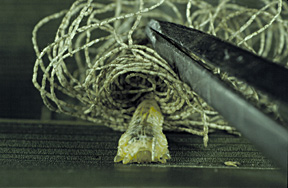 Photo by Thomas Eisner/Cornell University
A scientist's forceps reveals the larval tortoise beetle (Hemisphaerota cyanea) inside an almost perfect defense structure, a shield made of its own feces.

That insight did not reveal why predators are repulsed by the fecal thatch, however. The thatch appears to be chemically inert, according to Thomas Eisner, who has made a specialty of explaining the chemical defenses that organisms use to save themselves from harm. Predatory insects that touched the fecal shield did not try to clean themselves, as do most creatures that contact noxious chemicals. Perhaps it is because the thatch material - dried, odorless feces - is inert that it succeeds at cloaking the living things inside, Eisner speculated.

The mystery deepened further when the biologists found one predator that disregards the beetle's fecal shield. The carabid beetle C. viridipennis is so good at circumventing the shield - either by forcing itself under the thatch or chewing through - that the biologists suspect the insect evolved to specialize in tortoise beetle larvae. All that's left after a carabid beetle attack is the tortoise beetle's turret - and the thatch that worked so well in deterring most predators.

"So fecal thatch is not really the last word in defenses or even in recycling," Eisner commented. "That's all right. Predators have to eat, too. And every time we see a defensive strategy that seems to work perfectly - until it fails - we learn something more about how living organisms interact."

The study of tortoise beetle defenses was supported, in part, by a grant from the National Institutes of Health.