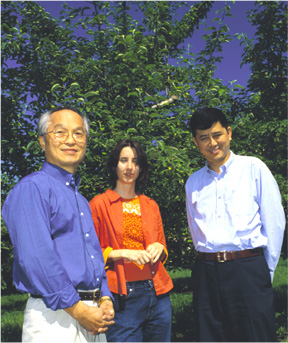 Time to adjust an old adage: It's the phytochemicals in the apple each day that keep the doctor away.

A combination of plant chemicals, such as flavanoids and polyphenols — collectively known as phytochemicals — found both within the flesh of apple and particularly in the skin — provide the fruit's anti-oxidant and anti-cancer benefits, say Cornell food scientists.

Their laboratory study, funded by the New York Apple Research Development Program and New York Apple Association, is published in the June 22 issue of the journal Nature.

Although it has long been known that apples provide anti-oxidant and health benefits, "this concept is different," says Rui Hai Liu, Cornell assistant professor of food science and lead author on the Nature article, "Anti-oxidant activity of fresh apples."

Says Liu: "Scientists are interested in isolating single compounds — such as vitamin C, vitamin E and beta carotene — to see if they exhibit anti-oxidant or anti-cancer benefits. It turns out that none of those works alone to reduce cancer. It's the combination of flavonoids and polyphenols doing the work."

An anti-oxidant is one of many chemicals that reduce or prevent oxidation, thus preventing cell and tissue damage from free radicals in the body.

"In this research, we have shown the importance of phytochemicals to human health," says Liu's collaborator, Chang Yong Lee, Cornell professor of food science at the university's New York State Agricultural Experiment Station in Geneva, N.Y. "Some of the phytochemicals are known to be anti-allergenic, some are anti-carcinogenic, anti-inflammatory, anti-viral, anti-proliferative. Now I have a reason to say an apple a day keeps the doctor away."

Marian V. Eberhardt, a graduate student in food chemistry who works in Liu's laboratory, also was part of the research team.

The researchers found that vitamin C in apples is only responsible for a small portion of the anti-oxidant activity. Instead, almost all of this activity in apples is from phytochemicals. Indeed, previous studies have shown that a 500 milligram vitamin C pill might act as a pro-oxidant. The Cornell researchers found that eating 100 grams of fresh apple with skins provided the total anti-oxidant activity equal to 1,500 milligrams of vitamin C.

"Eating fruits and vegetables is better than taking a vitamin pill," says Liu. "You can obtain enough anti-oxidants from food without worrying about toxicity. What this study shows is the combination of phytochemicals plays a very important role in anti-oxidant and anti-cancer activity, and the real health benefits may come from a phytochemical mixture."

The researchers used red delicious apples grown in New York state to provide the extracts to study the effects of phytochemicals. The researchers compared the anti-cancer and anti-oxidant activity in the apple flesh, and they also studied the fruit's skin.

"The consumption of whole fruits may provide the balanced anti-oxidants needed to quench reactive oxygen species," write the researchers in the Nature article. "Phytochemicals other than ascorbic acid (vitamin C) ... contribute significantly to the anti-oxidant activity of apples and to the capacity to inhibit tumor cell proliferation."

Lee began studying the enzymatic browning action of apples about 15 years ago, identifying a variety of phenolic compounds and learning how these chemicals work during the apple's browning action. Liu and Lee are working to study the antioxidant activity of various fruits and vegetables. The researchers learned that the amount of phenolic compounds in the apple flesh and in the skin varied from year to year, season to season and from growing region to growing region.