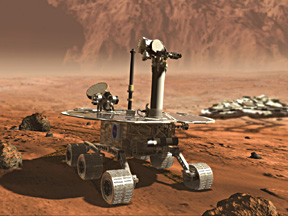 Copyright © NASA
A computer-generated image of NASA's new Mars rover that will be launched in 2003. The rover will carry a payload of scientific instruments provided by Cornell University. The image was created for NASA by Cornell undergraduate Dan Maas

ITHACA, N.Y. -- Cornell University has been selected by NASA to provide the scientific instruments and lead the science team for the next mission to the surface of Mars. The space agency announced today that a rover mission will be launched on June 4, 2003, and the spacecraft will land on Mars on Jan. 20, 2004.

The mission, which will carry a large roving vehicle to the surface of Mars, was chosen by Edward Weiler, NASA associate administrator for space science, after an intensive two-month study of the two competing candidates, the rover and a scientific orbiter.

Steven Squyres, Cornell professor of astronomy who will be the principal investigator on the Athena science cargo to be carried by the rover, says the Cornell package of instruments was chosen because of its promise of "outstanding science." The scientific purpose of the mission, he notes, "is pure in situ exploration of the surface of Mars."

Also on Squyres' large international science team will be Jim Bell, assistant professor of astronomy at Cornell, who will have responsibility for the rover's Pancam panoramic camera system. Pancam will reveal the terrain around the rover and will be used by the science team to select the most promising rock and soil targets for intensive study.

Frank DiMeo/University Photography
Steven Squyres, Cornell professor of astronomy, left, who will be the principal investigator on the Athena science package to be carried by NASA's new Mars rover, congratulates Jim Bell, assistant professor of astronomy at Cornell, who will have responsibility for the rover's Pancam panoramic camera system.

The spacecraft carrying the rover will use the same concept for landing on the Martian surface as employed by the Pathfinder spacecraft in its 1997 mission: A parachute will slow the spacecraft down, and airbags will inflate to cushion the landing. The new rover, however, will be considerably larger than the Pathfinder's Sojourner rover, weighing close to 130 kilograms (or about 250 pounds) and having a range of up to 100 meters (about 100 yards) per Martian day.

The rover's science package will consist of six scientific instruments, which Squyres says will allow it to act as "a robotic field geologist." The instruments, besides the Pancam, are a device called Mini-TES, to view the scene around the rover in the infrared; a microscopic camera; a Mšssbauer spectrometer to identify iron-bearing minerals; and an instrument called the alpha-proton-X-ray spectrometer, an improved version of the instrument used by Pathfinder's Sojourner rover that will measure concentrations of most major elements. The package also includes a rock abrasion tool, or RAT, to expose fresh rock surfaces for study.

Squyres says of the rover's scientific package, "It has everything a human field geologist has, and then much more. It has 20/20 vision, the ability to get inside rocks using the rock abrasion tool; it has spectrometers to tell us what rocks are made of; and it has a microscopic imager to tell us what things look like at a fine scale. It can use all these tools together to read the geologic record at the landing site and to tell us what conditions were once like, how much water was there, and, in particular, how habitable the site was -- how suitable it would have been as an abode for life."

Related World Wide Web sites: The following site provides additional information on this news release. Some might not be part of the Cornell University community, and Cornell has no control over their content or availability.