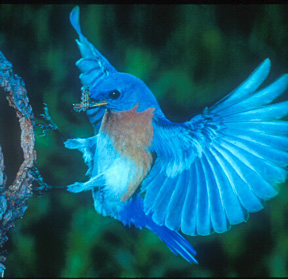 With hundreds of homes to his credit, Richard B. Fischer, Cornell University professor emeritus of environmental education, is a major player among Ithaca landlords. But the fact that his most sought-after tenants are Eastern bluebirds (Sialia sialis) doesn't make it easy to maintain high occupancy rates.

Sixteen years of hard work and setbacks have taught the retired teacher what it takes to make the bluebird of happiness happy: Location, location, location. And a few amenities.

"Bluebirds are actually very adaptable. They do accept humans around them. Some of our most successful nests are surprisingly close to human activity," Fischer says, thinking of one nest box he maintains near a family swimming pool in a busy backyard where bluebirds have nested in 10 of the past 11 years.

No, people apparently aren't a major factor -- although man-made changes to the environment kept New York's official state bird on the list of species of special concern until recently. So Fischer and a longtime colleague, Linda Buttel, a computer programmer in the Cornell Theory Center, surveyed the sites of their most successful bluebird nestings to see what the locations have in common. Their list (see below) "What Does the Male Bluebird Look for in a Nesting Site?" should help would-be bluebird landlords avoid disappointment. 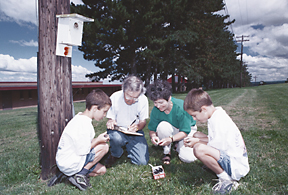 Together with plans to make bluebird nest boxes from recycled wood and the willingness to do a little maintenance, knowledge of the ideal bluebird territory could help rebuild populations of a species some people never thought they'd see again.

To anyone who will listen, including the throngs of children who appear when "the bluebird couple" (Fischer and Buttel) are monitoring bluebird boxes on private and public land in their neighborhood, Fischer tells why S. sialis became so rare. He takes listeners back to the19th and early 20th centuries, when the cavity-nesting species, which builds a tidy nest of grasses and pine needles but needs the above-ground shelter of a hole of some kind to start with, was in its heyday.

Today's airborne bluebird sees regrown forest or rooftops and asphalt where farm fields used to be. And fences around what few fields are left are supported by impenetrable metal posts. A cavity-nesting bluebird, if it is lucky enough to find a hole to call a home, can be ousted by more aggressive species, such as starlings, tree swallows or house sparrows.From the aerial viewpoint of a male bluebird seeking a nest site, Fischer recalls the miles of open farm fields that once filled the Northeast landscape. Holes in wooden fence posts then were among the bluebirds' favorite nest sites, and so were cavities in trees excavated by woodpeckers or other animals. Few exotic (non-native) birds competed then for the bluebirds' nest sites, and the farm fields were filled with nutritious grasshoppers and other insects to capture for the waiting bluebird babies with their gaping beaks.

Fortunately for the bluebird, thousands of Americans have taken up their cause, nd Fischer , with a Ph.D. in ornithology, has been among the most active friends of bluebirds to bring a scientific approach to the effort. While some volunteer conservationists were placing individual bluebird nest boxes near their homes or in nature preserves, others were establishing entire bluebird "trails" of monitored nest boxes. In New York, the east-west state Route 20 is one, and a transcontinental bluebird trail is proposed.

For Fischer and Buttel, who hold the required licenses to place numbered leg bands on birds of certain federally protected species, their trail is shorter but still labor-intensive. This year they are the landlords of 119 bluebird boxes along Snyder Hill Road, a suburban neighborhood east of the Cornell campus that was farmed until developers built human houses in the 1960s and '70s.

The bluebird season begins in winter, when most Ithaca-nesting bluebirds are farther south (although a few remain here in winter) and Fischer is in his basement shop, fabricating nest boxes from wooden grape crates that he scavenged from a nearby supermarket. ("Ask for California grapes," Fischer hints. "The wood in the crates from Chile is not so good.") Then there are older nest boxes to repair and repaint, and holes to plug in standing nest boxes to keep out overwintering deer mice. ("Mice aren't housebroken, and that rots out the wood in the nestboxes.") He will return to the field before bluebirds arrive to remove the plugs, open the tops and check the houses' readiness.

Late spring and early summer is the busiest time for the bluebird landlords, when the tenants are incubating eggs, the babies are hatching and fledglings are preparing to leave home. Fischer and Buttel temporarily capture and band the newborns and any adults without bands. They also monitor birds that returned after being banded in previous years, to learn more about how birds disperse and how they choose new or previous territories and mates.

Adult birds are captured while in the nest boxes when Fischer -- concealed in a portable blind or in a car if the box is near a road -- releases a string to drop a little door across the 1.5-inch hole in the front of the box. Adult bluebirds can be handled without trauma at any time except when they are setting on eggs and so can the babies -- a special treat for human children of all ages -- before carefully returning them to the nest.

At one time, Fischer maintained bluebird boxes throughout the Ithaca area, before concentrating on a neighborhood just around the corner from his Pine Tree Road home. He still drives, although health concerns keep him out of heavy traffic; at 81, he can out-hike many who are half his age.

Fischer's meticulous data records, which are handwritten before being transferred to the computer in a program devised by Buttel, reveal the scientific triumphs and avian tragedies of bluebird husbandry. Dozens of newcomers to Snyder Hill have been banded, and returnees are recorded. Births and successful fledglings are documented -- as are inevitable losses by a scientist who knows that without substantial annual mortality, the world would be overrun by bluebirds.

Still, the deaths of entire bluebird families -- both adults and all the young -- are always painful. Fischer attributes some mortality to cool, rainy spring weather this year when insects were hard to find. Adult bluebirds, who always feed their young first, had to undertake exhausting flights in search of insects. By the time the parents returned, Fischer surmises, the babies were too weak to gape and open their beaks, and all eventually perished of starvation.

The good news is the remarkably high occupancy rate: 21 percent of the Snyder Hill bluebird houses were filled with bluebirds this year. Some of the others (39 percent) were used by tree swallows -- a bluish bird (but not the brilliant blue of S. sialis) that Fischer tolerates because he studied them extensively before getting hooked on bluebirds. Besides, he knows that a tree swallow invasion can be circumvented by installing a second bluebird box within 10 feet; the highly territorial tree swallows will drive off others of their species but don't seem to mind bluebird neighbors.

Neither do the human types. "Dick Fischer brought the bluebird back to Snyder Hill," says Don Sears, an 81-year resident of the area who remembers the last time they were here. Fischer graciously shares credit with legions of other bluebird fans who are keeping S. sialis -- the bird that makes people happy just to see it -- a little happier.

And he hopes his findings about bluebird site preferences will make it easier for people and birds to share a habitat they can both call home.

What Does the Male Bluebird Look for in a Nesting Site? 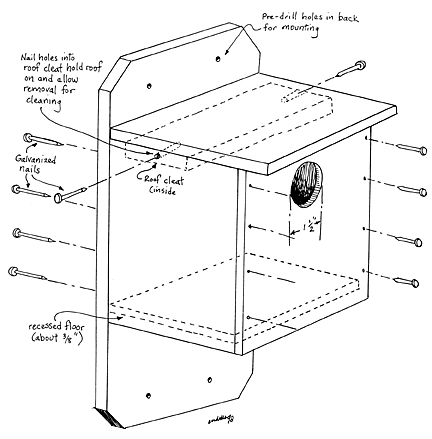 Gene Endres
Plans to build nest boxes for Eastern bluebirds (Sialia sialis). Boxes should be placed at (human) eye level for easy access by bluebirds and the people who care for them.

Although the female Eastern bluebird (Sialia sialis) builds the nest and incubates the young, the male arrives first and makes the initial site assessment. Then, during courtship, the male must persuade a potential mate of his overall fitness as determined, in part, by his choice of a nest site with abundant food for the young and protection from predators and competitors. The male waits by his suggested site, singing (loudly at first, then more softly when a female approaches) and performing courtship displays to draw attention to the nest site. If a female agrees, a match is made. Sites with repeated successful nestings of Eastern bluebirds in man-made nest boxes in suburban areas of upstate New York have these factors in common: