NASA/JPL
An image of the Rover from the Dan Maas video, with the collapsed lander in the background.

When NASA today announced its intention to send two rover exploration vehicles to Mars on its previously announced 2003 space shot, it introduced the ambitious venture with a two-minute, computer-generated video that dramatizes the mission with startling clarity and accuracy.

The video is the work of Dan Maas, a 19-year-old undergraduate at Cornell University enrolled in the university's College Scholar program for independent, interdisciplinary study.

Maas has been perfecting his artistic and technical ability to depict the drama of Mars landing missions for the past two years working with Steven Squyres, Cornell professor of astronomy. Squyres, who will be the principal investigator on the Athena science cargoes to be carried by the new, long-range rovers, calls Dan's work "sensational."

When, earlier this summer, space agency officials saw a previous Mars-landing video made by Maas, they requested that he make a video to herald the 2003 mission. Squyres found Maas working at a summer job at the University of Southern California Institute for Creative Technologies, a new graphics research lab in Los Angeles, and asked him to return to Ithaca.

Back home, the student produced the NASA video in just three days. "Thankfully I was able to re-use certain elements, such as the Martian landscape, from an earlier video. That saved a great deal of time and effort," says Maas. "It was quite a stretch, though, to accomplish all of that rendering before the NASA deadline -- I had all of our home computers and two laptops churning out the frames around the clock."

The movie opens in true Hollywood style, with the rover's antenna slowly appearing over a Martian ridge. The vehicle then descends a slope and after maneuvering its way around boulders approaches the edge of a crater, where its microscopic imager takes a fine-scale picture of the soil. Then it heads away into the distance as Maas's "camera" swings up toward the sky -- and a second space capsule. The capsule makes a fiery descent, then a parachute is deployed and airbags inflate to cushion the landing, which is made "bouncing ball"- style, first used in the successful 1997 Pathfinder mission. Then the second rover emerges and begins exploring an ancient lakebed.

Maas, who entered Cornell's College of Arts and Sciences at the age of 16, has been producing digital animations since he was 10, although his interest in film goes even farther back. His father, James, the noted Cornell professor of psychology, recalls giving him a home-built toy film-editing machine for his third birthday. At the age of 16, Dan Maas started his own company, Digital Cinema, to provide animations for television commercials, and at the age of 17, he went to Los Angeles to intern at one of the leading digital animation studios. In the meantime, he has been studying theater arts at Cornell under David Feldshuh, professor of theatre, film and dance, and taking courses in math and physics. 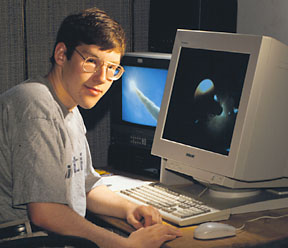 Somehow Maas also found time to work and study in Cornell's astronomy department, which is where he met Squyres, who as a seasoned mission scientist had not been impressed by previous videos that had attempted to depict space missions. "They were dry as dust," he says. But when Squyres discovered Maas's abilities to create such computer-generated scenes as a helicopter being struck by a missile or a prison guard tower blowing up, he signed on the then-freshman student. "The job interview consisted of two words: 'You're hired,' " he recalls.

Maas begins each video by hand sketching a storyboard, with each panel depicting a specific scene from the Mars mission, which he transfers to the computer with a wash of color. Then, using a program called Lightwave, he begins creating the images in three-dimensional detail. Later, using another program, Digital Fusion, he creates special effects, such as graininess to simulate the look of film, and lens flare -- the bright flash caused by the sun.

Almost none of Maas's scenes contain actual photographic images. Instead he uses a wealth of material -- conversations with Squyres and engineers, blueprints, images from NASA web sites -- to create his computer-generated space flight. He has even visited the Jet Propulsion Lab (JPL) in Pasadena to talk to the engineers managing the rover mission.

Take, for example, his depiction of the 2003 rover vehicle. First, Maas created digital geometric models of the chassis, wheels and sensors using blueprints provided by JPL as a guide. Maas then worked through each shot in the sequence, selecting camera angles and blocking out the rover's movements. Next, Squyres and Maas together refined the shots to combine scientific accuracy with cinematic excitement. The final step was rendering -- or automatically computing -- the nearly 3,000 individual frames of animation that make up the finished video, a process that took several hundred hours of non-stop calculation on seven computers.

Of course, there's much more to it than that. There is, for example, the considerable artistry involved in turning a simple shape into a convincing image of a rover wheel. "Basically, I think my job title is digital artist," says Maas. "It takes both technical skill and a strong grasp of traditional filmmaking techniques to make the most of my tools."

For Squyres, what impresses most is the Cornell student's "general cinematographer's sense" and "his fanatical attention to detail." The end product, he says, is a piece of work you look at and you think is real.

The Mars 2003 rover project will be managed at JPL for NASA's Office of Space Science.