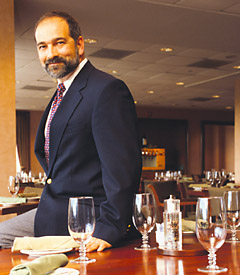 Michael Lynn worked his way through college hustling for tips as a waiter, then turned the study of tipping into an academic career.

Lynn, associate professor of consumer behavior in Cornell's School of Hotel Administration, has published his 16th study on tipping, titled "Gratitude and Gratuity: a meta-analysis of research on the service-tipping relationship," recently published in The Journal of Socio-Economics. This latest study is co-authoredwith Michael McCall, professor of business at Ithaca College, and is based on seven published and six unpublished studies involving 2,547 dining parties at 20 different, mostly casual dining establishments. In it Lynn finds that while tips are rewards for services rendered, there remains an element of unpredictability, even mystery, about tipping that makes it an unreliable measure of server performance.

To the uninitiated, such studies may not make a lot of sense. But for Lynn, a psychologist by training, tipping behavior makes for compelling research if for only one reason: We don't have to do it.

"Tipping is an interesting behavior because tips are voluntary payments given after services have been rendered," states Lynn, in his most recent study. "Consumers rarely pay more than necessary for goods and services. Tipping represents a multibillion-dollar exception to this general rule. It is an exception that raises questions about why people tip."

Then there's the business side of tipping: Restaurant patrons in the United States fork over approximately $16 billion in tips a year. A better understanding of why people tip would help managers make better decisions about when to permit or prohibit tipping of their employees, says Lynn.

Lynn wrote his master's thesis at Ohio State University
based on data collected from exiting customers at an International House of Pancakes in Columbus, Ohio. But the notion of tipping as an academic study came to Lynn earlier, when he worked his way through undergraduate school waiting tables at a press club in Austin, Texas. He received his bachelor's in psychology and economics from the University of Texas at Austin. His master's inspired him to begin a program of research on why people tip. At Ohio State, Lynn earned his Ph.D. in social psychology with a minor in statistics, philosophy and sociology.

Since then, Lynn said, he has written and published more academic research on tipping than anyone else -- a boast borne out by the facts. He is a nationally recognized expert on tipping and is frequently cited by other researchers. Lynn's insights have been reported in over 130 popular and trade-press articles, including Forbes, the International Herald Tribune, The New York Times, USA Today, The Wall Street Journal and The Washington Post, among others. Also, he has delivered featured talks on tipping to national restaurant association conventions in both the United States and Canada.

Asked to sum up his findings on the subject, Lynn offered these tips on tipping:

1) Tip percentages are only weakly related to customers' ratings of service quality in restaurant settings. This finding suggests that restaurant tips are poor measures of customer satisfaction with service and that they provide weak incentives for delivering good service.

3) Tipping is more prevalent in countries whose populations are achievement-oriented, status-seeking, extroverted, neurotic and tenderhearted. These findings suggest that tipping exists to serve several functions, i.e., to increase the social attention/esteem that servers give customers, to reduce consumers' anxieties about being served by others and to allow consumers to financially help servers.

How does Lynn decide what to tip after a meal?