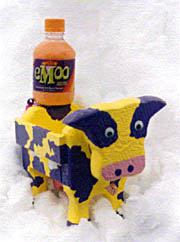 Taking direct aim at the youth sports drink and carbonated soft drink industry, a carbonated, milk-based beverage has been developed by food science researchers at Cornell University. It is anticipated that e-Moo, made by Mac Farms Inc. of Burlington, Mass., will be in supermarket dairy cases within months.

"The carbonation does the same thing in soft drinks as in e-Moo. It provides a carbonated sensation. Also, it extends the shelf life of what you would expect from milk," says Joseph Hotchkiss, Cornell professor of food science and one of the researchers who worked with Mac Farms on the product's development. "With refrigeration, we believe that e-Moo can last six weeks."

But unlike carbonated soft drinks, supercharged with sugar, flavoring, and little – if any – nutrition, e-Moo is good for children. "The time might be right for e-Moo," says Hotchkiss. "The nutrition base is right. If you are 5 or 6 years old, you might like this. It has the nutrition profile of milk and could be made better than milk."

The fluid idea of the e-Moo beverage began when George and Mary Ann Clark of Mac Farms noticed children, teens and young adults drinking large amounts of sports beverages and soft drinks. "At the same time, we also noticed that sales growth in the fluid dairy industry was flat. There had been no recent technical innovations that were of any direct benefit to the consumer," says Mary Ann Clark, vice president of marketing at Mac Farms.

Mac Farms turned to Cornell's food science expertise to produce a formula and to provide data on product stability, nutritional efficacy and the modifications to standard milk processing equipment for production. "They wanted folks with experience – and we helped turn this concept

into a product," says Hotchkiss, who has been working with the company and Eric Hallstead, manager of the Cornell Food Science department's pilot plant, for about a year.

St. Albans Cooperative Creamery, Inc., of St. Albans, Vt., a consortium of over 600 dairy farmers from Vermont, New York, New Hampshire and Massachusetts, provided the initial funding for the development of e-Moo. In addition to the carbonation, Cornell and Mac Farms tested a variety of flavors to add to the product. Initially e-Moo will come to the market in three flavors: Orange Cremecicle, Cookies and Cream, and Fudge Brownie. The product contains all the nutrition of non-fat milk with added calcium and only half the sodium found in other flavored milks. Named for the Internet world that children live in, e-Moo is sweetened with fructose instead of refined sugar.

Says Hotchkiss: "If there is a salvation for the fluid milk business, which has been on an economic downslide, it is making a beverage with milk components. And this could be one successful product."