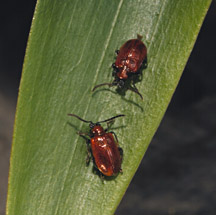 Help! For this beetle invasion, give them a ticket to ride … out of town.

The lily leaf beetle, an invasive species that dines on and destroys ornamental lily plants, has been found in New York state's North Country, say Cornell University entomologists. This is the first sighting of the beetles in the state. And beside their habit of devastating lilies, the young beetles also possess an interesting habit of personal hygiene -- covering themselves with their own excrement.

Tetreault brought the beetle specimens into the Clinton County Cooperative Extension office and showed them to Amy Ivy, a CCE educator in horticulture. Immediately, Ivy sent the beetles to E. Richard Hoebeke, a Cornell entomologist and curator of the university's entomology collection, who confirmed the identification.

The lily leaf beetles likely stowed away aboard a European plant shipment, and they first were found on this continent in 1942 near Montreal, but it was not until 1992 that they were first seen in the Boston area. Scientists are not sure if these two sightings are from the same infestation. Since their discovery in Boston, the beetles have been spotted throughout eastern Massachusetts and have continued to spread throughout the eastern regions of New England. By 1998 and 1999, the beetles were found in New Hampshire and along the southern border of Maine. They have been seen on the northwestern border of Vermont and now in New York state.

When Ivy had a television call-in gardening program in Plattsburgh, viewers as far away as Montreal would call to ask about the damage the beetles were causing.

"These beetles move fast, they are hard to handle and they really devour the plants. It's amazing," said Ivy. "That's why the viewers in Montreal were complaining about them so bitterly."

Photo courtesy of Richard Casagrande/University of Rhode Island.
The larva of a lily leaf beetle covers itself with its own dung. Scientists believe this protects them from predators

The adult beetles stay alive throughout the winter and emerge early in the spring, when they begin looking for food and mates. The adult females lay their eggs on the underside of lily and solanum leaves and produce between 250 and 450 eggs, according to research by Richard Casagrande, an entomologist at the University of Rhode Island. The eggs appear in April or May and hatch within eight days.

Specifically, the beetles attack Asiatic lilies (Lilium sp .) and Fritillaria , according to Carolyn Klass, a Cornell extension educator in entomology. The young larvae feed on the underside and the upper surface of lily leaves and sometimes on lily buds. This feeding period, which lasts 16-to-24 days, is the most destructive. From there, the beetles drop to the soil and pupate, emerging as adults about 16-to-22 days later, according to Casagrande. They feed throughout the rest of the growing season.

These beetles have a bright red exoskeleton about a half-inch in length. The larvae look like slugs, with swollen bodies and black heads, according to Casagrande

And their personal hygiene leaves something to be desired: While they feed, the lily leaf beetles cover their bodies with their own excrement, giving them a grotesque appearance.

"It must be some sort of defensive mechanism," says Hoebeke. "It makes them look like a bird dropping, warding off predators and parasites. Tortoise beetles, for example, put fecal material on their backs for that reason."

Casagrande concurs with Hoebeke saying that the larvae cover themselves with their own feces to reduce being hunted by birds and ants.

What can be done to stave off the invasive beetle? Not much, says Hoebeke. "Based on what I 've read, it is widespread in Eurasia. There, the egg batches on the underside can be destroyed by hand." Ronald D. Gardner, a Cornell extension educator with Cornell's Pesticide Management Education Program, says there are two pesticides registered in New York that may be applied to control the beetles: Ornazin and Schultz Houseplant & Garden Bug Spray. Ornazin (EPA 5481-476) contains a biochemical pesticide that is extracted from the Neem tree and is formulated to be mixed with water. It affects the insect while in the larval stage by interrupting molting and it also may repel the adults. Schultz Houseplant & Garden Bug Spray (EPA 1021-1667-39609) comes in an aerosol can. It may be sprayed on the plant to control both adults and larval stages of leaf beetles. Gardner says, however, he cannot guarantee the efficacy of these products until they are tested for this particular beetle.