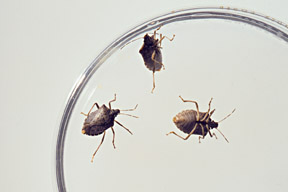 The first infestation of brown marmorated stink bugs (Pentatomidae: Halyomorpha halys) in the United States has been positively confirmed in Allentown, Pa., by a Cornell University entomologist. The bug is indigenous to Asia and is considered a major agricultural pest in Japan.

Throughout parts of Allentown, the insects are in trees and in houses, where they produce a pungent, malodorous chemical. "Imagine hundreds of them inside your house. There is no insecticide to get rid of them. The only thing you can do is sweep them up and throw them back outdoors," says E. Richard Hoebeke, Cornell senior extension associate in entomology. "And even after that, they want to come inside again where it is warm."

Why Allentown? Hoebeke speculates that the adult insects stowed away inside bulk freight containers arriving from Asia. "That's usually how some invading insects get here," he says.

The Lehigh County, Pa., Cooperative Extension office has been receiving many inquiries from concerned homeowners. "There were lots of phone calls, lots of complaints," says Karen Bernhard, an entomologist in the extension office. "A lot of people have called because they really hate it. They really, really hate it."

The bugs get their name from scent glands on the abdomen and under the wings. When the animal is disturbed, the scent glands discharge an unpleasant scent that spreads as the wings flap. The insect is about three-quarters of an inch long, with a brown, marble-like exoskeleton covering its body. Adult stink bugs like to stay in warm places, like houses and under rocks, throughout the winter, says Hoebeke. In the winter months, the bug goes into a diapause (a period of delayed development) until the spring thaw. Its blood contains glycerol, which serve as a natural antifreeze. As the days warm in the spring, the emerging adult stink bugs mate, and the female deposits her eggs on the leaves of fruit trees. By May, the nymphs feed on the host fruit trees and by midsummer molt into adults. Hoebeke says that since the insects are frequent flyers, they will spread out from around the Allentown area. They can fly hundreds of yards at a time, and their flights in search of overwintering sites peak around the third week of October. By the end of November, the stink bugs stop flying and hunker down for winter.

The insect also can be a severe agricultural pest, threatening apples, pears, peaches, figs, mulberries, citrus, persimmon and soy beans. The stink bugs have a particular affinity for Fuji apples, according to scientific literature from Japan, China and South Korea. In the late summer months, the insect inserts its stylet-like mouth parts into the fruit to feed. This stylet feeding causes "cat-facing" on the fruit, making it unmarketable.

The stink bug probably has been in Allentown for about four years, according to Bernhard, but was not positively identified until last week, when the Lehigh County extension office sent specimens to Hoebeke, a taxonomist and assistant curator of the Cornell University Insect Collection, one of the world's largest insect repositories. He found a match among specimens collected from Harima, Japan, in May 1916.

How should Allentown residents cope with the infesting stink bugs? Says Bernhard: "People may not want to hear this, but they're going to have tighten up their houses."