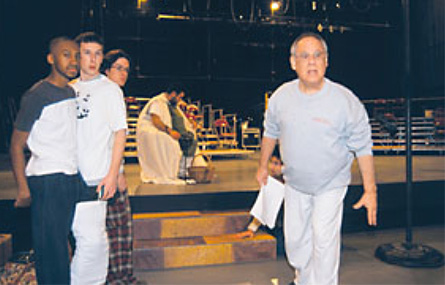 If Richard Schechner were a highway hazard sign, the warning might read "Caution: Mind Wide Open." On stage, as in life it seems, there is no 'right way,' only what works and what doesn't -- and even that can be fleeting.

"I sometimes change my mind," Schechner tells a student actor who is flummoxed by the director's spontaneous adjustments during rehearsal last week for Waiting for Godot at Cornell's Schwartz Center for the Performing Arts. "It's one of my worst habits; you'll just have to get used to it."

Paige McGinley has gotten used to it and relishes the experience. McGinley is a Cornell graduate student in theatre arts working as Schechner's assistant director for Godot.

"One of the things I most admire about Richard's directing is the way he frees himself from the common assumptions of what theater 'must have' or 'must be,'" said McGinley. "He questions every convention, every choice that many directors or actors or scholars never think about. And although he is a very good and important scholar, he does not allow an intellectual approach to constrain the play. He approaches the play viscerally -- as music, as playing."

Schechner invited the community to join in that process. He encouraged people to come watch rehearsals and run-throughs -- and to bring their friends -- and he later solicited input from his guests. If the suggestions improved the show, he used them.

"The assertion is that performance, that is, how people behave and display their behavior, is a fundamental category of human life," Schechner said. "I don't know whether it's exactly the same as Shakespeare's 'all the world's a stage,' but it's in the same ball park."

A Cornell A.D. White Professor-at-Large and 1956 Cornell alumnus, Schechner is here primarily to direct Godot, which opened Jan. 30 and has performances through Saturday night. But he's also made his presence felt at an anthropology department roundtable last week and as a Mind and Memory series guest lecturer earlier this week.

Schechner helped found the Department of Performance Studies at New York University's Tisch School of the Arts, where he has been a professor since 1967. A leader in the interdisciplinary field he helped to shape, Schechner has promoted numerous international projects in performance history, theory and theatrical production. Performance studies at NYU now embraces work in anthropology, sociology, psychology, folklore, popular culture, theater and dance, feminist and queer theory, post-colonial studies and cultural studies.

Although he's considered a theorist, Schechner is a man of action who says theory without practice is only so much "fried air" -- to borrow an expression from his friend and theater arts colleague, the late Michael Kirby.

"The domination of theory for its own sake is coming to an end in academia," Schechner said. "Theory is secondary to something one does based on experience, on data, on fieldwork and on experiment. Performance studies as an academic discipline is extremely open to new theoretical constructs that try to bridge and narrow or eliminate the gap between theory and practice."

Schechner has directed theater productions around the world and founded the experimental Performance Group in 1967. That ensemble evolved into the renowned Wooster Group following such innovative pieces as Dionysius in 69, Commune and Mother Courage and Her Children.

"Richard's work has always been original," said David Feldshuh, Cornell professor of theatre, film and dance and artistic director of the Schwartz Center. "I first met Richard and his company when I was a young actor at the Guthrie Theater in Minneapolis more than 30 years ago. In those days, he was challenging the boundaries that separated audience and actor as well as redefining what performance means. He's never stopped."

Schechner continues to serve as editor of The Drama Review (TDR), where he helps cultivate the critical writing of new and established colleagues on the subject of performance studies, intercultural performance and experimental work across a broad range of genres and disciplines. Schechner's articles and books are a staple in classrooms worldwide, and his texts such as Performance Theory, Environmental Theater and Between Theater and Anthropology are familiar to many students in the field. His latest book, Performance Studies -- An Introduction (Routledge), due out in April, is a primer on the wide-ranging yet emerging field.

Robert Ascher, Cornell professor of anthropology, says Schechner's multi-dimensional, all-inclusive global approach to art and world culture gives students and scholars in the field of anthropology, for instance, a lot to think about.

"The social sciences, humanities and the creative arts all ask basically the same question: what is it to be human? Schechner also asks these questions and bridges those different areas with adamant and lively discussion," said Ascher. "He's also one of the few people working in Western theater who has the experience and knowledge of theater in (non-Western) cultures and can make connections between cultures from all over the world."