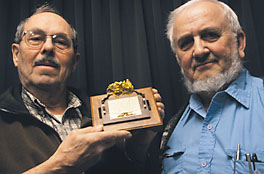 After two decades, a fine gold specimen has come home. But instead of forming a Tiffany necklace, it will rest permanently in a special display case in the mineralogical museum in Cornell's Snee Hall.

The nugget, a rare and valuable piece of naturally crystallized gold, like a cluster of sparkling, yellow rosettes about four inches in diameter, came from California gold country in the mid-19th century. It was once part of the collection of the Department of Geological Sciences, now the Department of Earth and Atmospheric Sciences. In 1984 it was presented to benefactor Katherine Snee at the dedication of the department's new home, Snee Hall. Snee's late husband, William, had financed the building's construction.

After Katherine Snee's death last year, her nephew, Paul Heasley, following her instructions, donated the piece back to the department's Timothy N. Heasley Mineralogical Museum, as a memorial to the Snee family. Timothy Heasley is another of Katherine Snee's nephews.

The gold will remain part of the Benjamin Silliman Jr. Collection. Silliman, a professor of chemistry and mineralogy at Yale University, was a 19th-century pioneer of earth sciences and a noted collector of minerals and fossils. He also is credited with the development of a technique for distilling crude oil, which helped give rise to the petroleum industry.

The nugget is the largest in the department's fine collection of gold, collected by Silliman on various expeditions to the Western United States. This specimen was collected in 1865 from the Spanish Dry Diggings of Amador County, Calif.

Gold veins are formed as the precious metal is carried in natural hot solutions under pressure and then deposited in cracks in rock as the liquid slowly cools. This process results in the slow formation of crystals with regular geometrical shapes. Most gold mining today uses chemicals to extract gold from very large volumes of rock that have very low concentrations of gold. As a result, specimens of rare beauty are becoming increasingly hard to find. "These unusual specimens just keep getting rarer and rarer," said John Bird, professor of earth and atmospheric sciences, who selected the nugget as a gift for Katherine Snee at the time of the building dedication. "The fact that it is a Silliman specimen makes it a collector's item."

"As a specimen, it's a very fine piece, a very interesting piece," said William Bassett, professor emeritus of earth and atmospheric sciences and curator of the Heasley mineralogical museum. "It is the nicest specimen of gold from a very fine collection that has been with the department for many years."

Bassett's own research deals with experiments in the formation of crystals from solutions at high temperatures and pressures. Specimens like the Silliman gold have scientific value, he said, as they can yield insight into how processes of crystallization take place. As for monetary value, the gold's worth far exceeds the value of the metal alone.